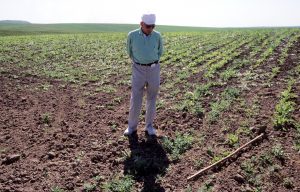 On June 10, 1998 two monuments were dedicated in Rohatyn; one monument was erected in the outskirts of the town, Babińce; 3500 Jews were killed there on March 20, 1942. The second monument was erected in Rohatyn near a brick kiln (cegielnia). Jews were brought there from the surrounding towns and villages together with Jews from the Rohatyn ghetto after its liquidation on June 6, 1943. Jack Glotzer’s mother and his youngest brother, Moshe Emanuel are buried there. The exact number of Jews buried there is not known; the estimated number of Jews murdered by the Germans between 1941 and 1944 and buried there is 14,000 [32].

Beatrice and Jack Glotzer made a trip to Rohatyn for the dedication of the two monuments. The dedication of the two monuments was attended by people from three continents which included survivors, second and third generations of descendants, local citizens, local officials, a rabbi, priests and the press. Eulogies were delivered in several languages (Yiddish, Hebrew, English, Polish and Ukrainian); Kaddish and “El Malei Rahamim” were recited. Jack Glotzer said Kaddish for his family at the monuments. The pilgrims were addressed by a local mayor (who promised to protect and preserve the two monuments and the mass graves), a Roman Catholic priest, a Greek Orthodox priest and local citizens.

The Jews buried in the mass graves are men, women and children who were not only brutally murdered by the German barbarians and their collaborators, but were never given a proper burial with monuments indicating their identities. They were mothers, fathers, brothers, sisters with names and relatives. Their lives and identities were taken away from them in order to completely obliterate their existence.

But we shall never forgive and shall always remember them.

I will give them a memorial and eternal renown which will not be terminated.
(Isaiah 56:5)

[32] [The number of dead buried at this location is still unknown, but currently estimated at more than 4,000. -Ed.]