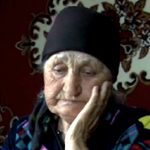 The house was full of people. In this building, and in the hayloft, because they were afraid, because everyone wanted to live. Afterward, when the Russians came here, they came here for milk, we gave them, anyone who came, we gave them milk, gave them something to eat. As well as the Jewish children, because a child came and wanted to eat. My brother was the same as me, I would not eat; I gave food away because the poor child wanted to eat. Well, then the front passed and they started to organize the kolkhozes [collective farms]. I earned 9 kg of sugar, 30 kg of wheat and 40 rubles – this was supposed to last the whole year. How did people survive? Somehow, they gathered in the woods beechwood seeds and made oil from them, anything, just to have something to smear, just to survive. It was very difficult. If God would grant that there be no more wars, that these children not see war, because it was terrible, terrible. Children couldn’t sleep, they cried. It was terrifying to get through the night. Everyone feared for his or her life, whether old or young. Everyone wants to live. And now, you see, again there is no peace in Ukraine.