Browse Rohatyn’s Jewish (and Other) History 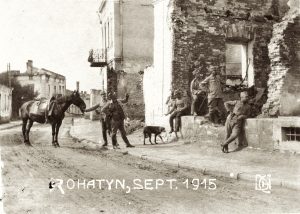 Perhaps you are interested in the history of Rohatyn but are bored by history timelines? Maybe you are wondering, where did we hide that fascinating 1932 film by Fanny Holtzmann which shows smiling people walking and interacting in various locations around Rohatyn? Or possibly you are researching a topic of Rohatyn’s history which doesn’t tie to one specific event or period? There could be many reasons why a timeline format is not ideal for your interest in the Jewish and other pasts of Rohatyn. This page collects all of the articles which we have written for our website covering events, people, places, and themes from those pasts, in a simple list format so you can browse them without searching the timelines.

Even this simple list is becoming long, so the articles are grouped by general time period (as in the timelines), beginning with thematic articles which span more than one period. And yes, the list is not complete yet, because we are still working on portions of the timeline and on supporting articles, but they will be added here as they are completed.

In case you really do want to follow the timeline, here’s the outline: A History of the Jewish Community of Rohatyn.

Inventory of the Rohatyn District in 1725

The Jewish Population of Rohatyn in 1765

The 1907 Austrian Parliamentary Election in Rohatyn

1926 Polish Declarations of Friendship with the United States

The Katzmann Report and Rohatyn

USHMM Encyclopedia: Ghettos of Rohatyn and the Region

What’s in a Word: Regional Terms for Jews, Past & Present

Written in Stone: The Art and Meaning of Rohatyn’s Jewish Grave Markers