Sustaining heritage requires attention and care. Once a decision is made to recover, rehabilitate, and protect an object of physical heritage, a long-term project of monitoring, management, and action commences. This is how Rohatyn Jewish Heritage came into being. 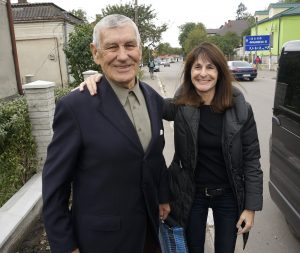 Our Ukrainian non-profit NGO was born from an encounter with retired teacher, local historian and activist Mykhailo Vorobets in spring of 2011. During our first meeting with Mr. Vorobets, when we explained our interest in the Jewish past of Rohatyn, he led us a short distance from the city library to a private garden on the same street, and informed us that there were Jewish headstones from the city’s cemeteries buried underneath the flowers and vegetables which were then just starting to sprout. He asked us simply, what did we want to do. We learned from Mr. Vorobets that since the 1990s he had assisted a handful of Jewish survivors of the Holocaust in Rohatyn to make arrangements to move unearthed headstone fragments back to the Jewish cemeteries, but in recent years he had no longer heard from any of the survivors, and he presumed they were no longer living. When we resolved to take on the project, we guessed from the details Mr. Vorobets had at the time that “over a dozen” headstone fragments would be recovered; in fact, in the years since then many hundreds have been recovered and returned to the Jewish cemeteries. Other projects grew out of this first one, as we spent more time in Rohatyn and learned more about its centuries-long multicultural past, the harsh years of German and Soviet occupation, and the new openness of the city in independent Ukraine.

Our first meeting with Mr. Vorobets and Ihor Klishch at the library in 2011; and walking up the street that day to view the garden with buried headstones. Photos © 2011 RJH.

That Jewish headstone recovery would be the start of the NGO and our efforts to reconnect the Jewish and Ukrainian communities of Rohatyn is easy to understand from photos of our work. The symbolism inherent in the act of unearthing an artistically carved relic of a destroyed community, inscribed with strange lettering in an unknown language, remains as powerful for us as it does for Rohatyn’s modern Ukrainian residents. It is of course even more compelling for the living descendants of Rohatyn’s pre-war Jewish community, who have family connections to the recovered stones, the cemeteries, and much more in town.

Extraction of the first batch of headstone fragments from the private garden, with Mr. Vorobets overseeing. Photos © 2012 Abram Lyons.

Most of our projects are primarily physical in nature, and tied to the Jewish physical sites and objects which survive in Rohatyn; links to descriptions of the history and characteristics of these features are included on our Jewish Heritage Overview page. As seen in the project pages below, a few of the projects are focused on recovery and promotion of history, education, and new technologies. Inevitably, like the headstone issue which started Rohatyn Jewish Heritage, some new issues are raised which do not fit neatly into any of our existing projects; several of these “other” past and current projects are also described below, and we must always be prepared for still more of them.

Our History and Heritage Preservation Projects

Descriptive pages covering the several organized projects in active management by Rohatyn Jewish Heritage are linked below. On each of the project pages, we provide an introduction to the issues we are addressing, a list of the project goals, details of approaches to addressing each of the goals, a brief discussion about maintenance in the future of the project, and a summary of the past, running, and (where an estimate can be made) future costs.

As is apparent on each of the project pages, the heritage and the work we do benefits from very active support from Rohatyn residents, the Rohatyn City administration, heritage activists and organizations in western Ukraine, international supporters, and to a very large degree the descendant Jewish community of Rohatyn abroad. The number of people who have given their time, materials, and money to help advance our projects is stunning. Anyone can help, in small or large ways; we encourage all to join and lend a hand on our projects.

One of several headstone fragments discovered in Rohatyn in September 2016, then recovered and returned to the old Jewish cemetery. Photos © 2016 Olga Verbiana and RJH.