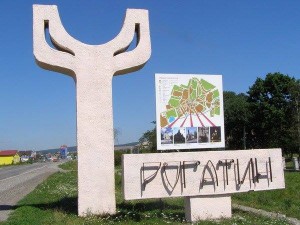 The city of Rohatyn is geographically large enough that new visitors need a map to see more than the main highways which cross through town, and paper maps of Rohatyn are somewhat scarce even at town bookstores and kiosks. Pre-war Jewish, Polish, and Ukrainian residents would have had mental maps of the streets and key sites in town, as current Ukrainian residents do, but what each group most focused on and remembered is different. As we discovered during our first visits, many people living and working in Rohatyn today do not know how to find (or direct others to) the major sites of Jewish history and heritage in town. As well, several of those heritage sites have lost their original self-explanatory visual character and are today almost without information, though memorial monuments at four locations provide some much needed clues to at least the wartime events, for visitors who can find them.

This project aims to provide guidance to both locals and visitors to help them find the key heritage sites, and once at the sites to learn about their history and significance. In general, the design and development of physical signage for placement at Jewish history and heritage sites around the city is outlined on each of the relevant project pages on this website; the umbrella project described on this page exists to tie the signage strategy, formats, and content together across projects.

The goals of the Physical Signs and Markers Project are to:

Apart from preliminary discussions with Rohatyn city officials and the Opillya museum director about our mutual interests in seeing signage installed for all history and heritage sites in town, no work has yet been done on this project. We anticipate that our signage project will see a start in planning, design, and review thanks to a Fulbright Program research grant awarded to Rohatyn Jewish Heritage president Marla Raucher Osborn for the 2019~2020 academic year, with specific focus on the old Jewish cemetery. As for our other projects, all RJH efforts will proceed with the continuing involvement of the Rohatyn city office and the office of the Rabbi of Ivano-Frankivsk. 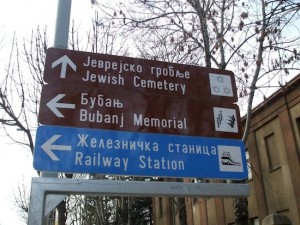 Geographically, Rohatyn is a medium-sized town; it spans an area of about 3km x 2km (2mi x 1.3mi), in an irregular shape which covers almost 4 square kilometers (1.5 square miles). Although Jewish religious buildings were concentrated near the city center, Jewish homes were spread all over town, including in the village of Babintsi to the east of the town center, now incorporated as an integral part of Rohatyn. The Jewish cemeteries were and are near the town limits; the killing grounds and Jewish mass graves of World War II are also near the edges of town.

See a digital map of the major Jewish heritage sites in Rohatyn.

Overall, the development of directional signage is the responsibility of the City of Rohatyn; the role of Rohatyn Jewish Heritage is to provide the City with heritage information and recommendations for labels, symbols, and access (primary arrows at major road entrances to Rohatyn, and secondary arrows at key road intersections along access routes). Ukrainian, European, and world tourism organization standards for symbols, colors, direction, and bi- or multi-lingual text, as well as the international standard ISO 7001, are important references for the development of signs so that visitors can reliably interpret the directional information. 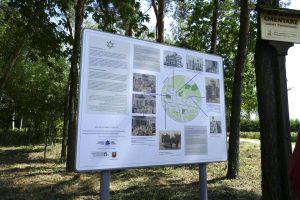 The Jewish heritage sites are only part of the larger multicultural historical landscape of Rohatyn, and directional signage indicating all of the sites should be developed by the City as part of an integrated strategy. Likewise there are many different media which could help guide residents and visitors to key historical features in town, and directional signage should complement these other possible information types, for example paper maps (which may be available at information points such as the local history museum and a kiosk at the city center), digital map applications with heritage walking and driving routes, etc. Some of these options are discussed further on our Digital Information Project page and on tourism pages (in development).

Directional signs should also be placed together with informational signs at the major heritage sites, so that the history of each site function is described in context of other nearby features of local history, and visitors to one location will be encouraged to see others as well. For these site directional signs, a simplified graphic map of Rohatyn can present the sign location (“You are here”) and the major Jewish heritage sites, ideally with icons, photographs or other visual clues to their significance, but also with brief multi-lingual text to label each of the sites on the map. A sign installed by the City of Rohatyn identifying key cultural sites in town (as seen near the top of this page) is a good model for locating the Jewish heritage sites and for sign positioning. There are other useful examples in nearby Lviv and all over Europe, including at the Jewish cemetery of Nasielsk, Poland, as seen here (click the installation image above to see the sign design in greater detail).

The concepts for physical signs providing information about several of the Jewish heritage sites in Rohatyn are described on the pages detailing those projects. The overall concept is to explain the past function of each site and its role in the past Jewish community, with a small number of images and documents. Ideally, signs will be sized to permit text in three languages (Ukrainian, English, and Hebrew) but without obscuring views of the sites themselves. At several of the heritage sites, text on existing memorial monuments briefly summarizes the tragedy of the destruction of the Rohatyn Jewish community in dates and numbers, but we want to help the sites also speak to the prior history of the community and its neighbors, and to explain the original purpose of those sites and the renewal of Jewish memory in town.

Examples of similar signs, not only in Ukraine but all over Europe, are readily available to guide the concepts into planning. Completed Jewish heritage projects in other towns and countries can directly serve our research needs, but we must also attend to the specific needs of Rohatyn’s residents and visitors, as well as local climate extremes and other factors. 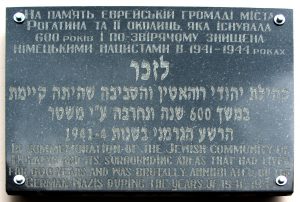 The sign on the former Judenrat building
in Rohatyn. Photo © 2012 RJH.

In addition to providing information for visitors to the major Jewish heritage sites (cemeteries and wartime mass graves), we look forward to working with the City of Rohatyn, including the Opillya museum, on plaques and/or other information signage to be installed on or near buildings in town which are significant for the current and past religious communities, or which were the shops, professional offices, or residences of prominent past Rohatyn citizens (Jews and others). One such sign already exists in Rohatyn: a plaque installed on a roadside school building east of the town square commemorates the lost Jewish community but does not identify the building to which it is attached as the former office of the Rohatyn Judenrat, a wartime Jewish council created by the occupying German administration to interface between Nazi officials and the Jews incarcerated in the adjacent ghetto.

The historic Stenzel Building in Rohatyn, in 1918 and today. Images from the public domain (Academica Wypożyczalnia) and © 2011 Alex Feller.

Many other buildings in town could be labeled to create paths of living history of multicultural pre-war (and pre-Soviet) Rohatyn. The surviving structures of the Jewish religious community, for example, may benefit from plaques to explain their past purpose and perhaps inspire efforts to preserve those which are crumbling. Likewise the buildings ringing the central town square (former market square) and on key branching streets could be labeled to identify their former occupants and how the buildings were used in the past. One example is shown here: A large building on vul. Shevchenko at the corner of vul. Mitskevycha, which today houses apartments and a variety of small shops; from a 1918 photograph, we see that the historic Stenzel Building had a similar purpose, and housed among other businesses the paper and print shop of Chaim Szkolnik, a prominent Rohatyn Jewish printer who left his mark on many publications, including several now preserved in Rohatyn’s “Opillya” local history museum.

The historical significance of many heritage sites, buildings, and other features of the urban landscape can be difficult to explain in the limited space available on physical signs for text and images, and some kinds of information (video, sound, etc.) cannot be conveyed on conventional signs at all. Simple active links to information on the internet via QR codes , conventional barcodes, or ordinary URLs can provide open access via web-enabled mobile devices such as cell phones and tablets to further information, additional related media, or alternative information formats for visitors with disabilities, and also create opportunities for revisions to printed information on physical signs when later research amends the known history. These links may connect to City-curated websites such as that of Rohatyn’s Opillya local history museum, or managed tourist center websites, or independent history/heritage websites such as Rohatyn Jewish Heritage.

Recurring maintenance of sites and their features is an important part of all of our projects. Planning and cost estimates for long-term maintenance of informational signage will be included in each of the site projects, and low-maintenance considerations will serve as essential factors in many design decisions. Maintenance of directional signage will of course be the responsibility of the Rohatyn city office; we will continue to support the City on that work. For all physical signs, ongoing care will be required to minimize the effects of weather and to counteract misuse and simple vandalism (tagging) common to signs and walls in any city.

No costs have yet been estimated for any physical informational signs; see the individual Jewish heritage project pages for developing plans and costing.

Costs associated with physical directional signs will be estimated and budgeted by the City of Rohatyn; we anticipate that the voluntary contribution from Rohatyn Jewish Heritage toward those signs will be suggestions and recommendations for indicating and labeling Jewish heritage sites to coordinate with the many other types of heritage and service points to be indicated in town.