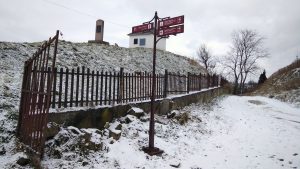 A signpost outside the old Jewish cemetery in Rohatyn. Photo © RJH.

New bilingual directional signs and maps were installed this month at key locations in Rohatyn which highlight more than a dozen landmarks, cultural sites, and tourist attractions, including three of Rohatyn’s Jewish heritage sites. Attractive signs now point toward the “old” Jewish cemetery in Rohatyn (one is also installed at its entrance), and there are directional signs now indicating routes to both the north and south Jewish mass grave memorials as well. We anticipate that in the future there will also be new signs pointing to the “new” Jewish cemetery of Rohatyn among other cultural heritage sites on the periphery of the city.

Rohatyn Jewish Heritage team member Vasyl Yuzyshyn made his first visit to Rohatyn in the new year yesterday to see and photograph the new signs for us. We had learned last month that signs were in fabrication, and the City unveiled the signs on their websites two weeks ago. Meeting beforehand with Olha Blaha and Roman Yasinskyi of the Opillya regional history museum to learn the locations of all of the directional signposts, Vasyl was able to visit each of the nine installations. 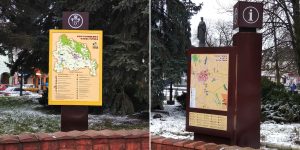 New multidirectional signs can now be found at major pedestrian locations and street intersections in the city center, including several placed around the rynok (town square) and at the intersection of Halytska Street (the major north-south thoroughfare that runs through town) and Ivano-Franko Street, a pedestrian-only street where the public library is located. There are also new signs in less commercial neighborhoods of the city highlighting, for example, historic churches, (such as the UNESCO-listed wooden 17th century Holy Spirit Church at the Hnyla Lypa river), monuments to historic figures, city parks, and museums.

This important new municipal project was realized by the Mayor and City Council of Rohatyn with the support of the Opillya Museum and other City staff. It is a project which the City has had in the works for some years, and one that was discussed during our many past meetings with the Mayor and his staff. As the City well knows, bilingual directional signs pointing to Rohatyn’s Jewish and other cultural heritage are important not only for the local population but also for foreign visitors to western Ukraine. This crucial topic is discussed at length on my Fulbright research website. We are thrilled that this project has now been realized in Rohatyn.

A few of the new directional signs pointing to heritage sites around Rohatyn. Photos © RJH.

Since its opening in fall 2018, the Opillya Museum continues to be a major participant in projects of the City involving tourism and heritage, and serves as a helpful first stop for city and regional tourist information, maps, and other historical references for many visitors to Rohatyn, especially foreigners. The new signage is complemented by a new tourist brochure the City and Museum also jointly produced. Jay and I are pleased to continue supporting these official City efforts to promote cultural tourism and heritage, and this past week worked with the Museum to make a translation of the new brochure into English.

We are delighted to say “Mazel tov!” to the City of Rohatyn. Together, the new directional signs and the brochure make a very big step toward helping foreign visitors and local residents find the physical sites and learn about Rohatyn’s multicultural past. During the past several years, the City has increasingly promoted its Ukrainian, Jewish, Polish, and Turkish history through both physical and metaphorical signs. Today, for example, on International Holocaust Remembrance Day, public social media posts on the Facebook pages of the City Mayor, the Opillya Museum, the city’s public library, and the Lyceum named for the Rohatyn Brothers (known to Jewish descendants as the Red School) each remembered Rohatyn’s lost Jewish community and the tragedy which occurred here during the war years. The library also dedicated a bookcase exhibition in its reading room to materials on the topic, including books by and about Rohatyn’s past Jewish citizens, our reports on the mass grave surveys, and more. This open embrace of our shared history with today’s Rohatyn is very welcome indeed.

Images for International Holocaust Remembrance Day on the Facebook pages of Rohatyn’s Mayor,
the City Library, and the Rohatyn “Opillya” Museum.

There is now a YouTube video (in Ukrainian) about the new heritage signage and the tourism brochure, produced by the City of Rohatyn.