Arrival and Settlement: The Early Years in Rohatyn

Go to the outline, A History of the Jewish Community of Rohatyn.

Presented here is a timeline of Jewish presence in Rohatyn from first arrival to the start of the Great War. Jewish life in this timeline spans about 350 years, preceded by another two centuries of town history before Jews first arrived in Rohatyn. Overall it was a period of changing monarchies and the evolution of local social structures, but with more gradual shifts than those which would mark the 20th century.

This page is part of a selective history of the Jewish community of Rohatyn. This history comes from many sources and many perspectives, Jewish and otherwise, and includes historical facts (plus a few legends) which illuminate life in Rohatyn’s past to better understand its present. Most of the sources are linked inline or listed at the end of this page.

1375 – First documentation of the town of Rohatyn [1]; other sources say 1184. Legends continue to disagree about the meaning of the town name, more than 600 years later. [2]

1372~1378 – First settlement in the area of Rohatyn, during the reign of Prince Vladislaus II of Opole serving as Governor of the Ruthenian Voivodeship within the former Kingdom of Galicia-Volhynia for the Crown of Poland. [5]

1380s – Galicia-Volhynia is lost by King Louis I of Hungary, ruler of Poland, but regained by his successor Queen Jadwiga of Poland in 1387. Rohatyn remains under Polish rule for the next 400 years.

late 1300s – St. Maria Church founded off the rynek, as the Church of the Nativity of the Theotokos. [2]

1415 – The settlement of Rohatyn is destroyed; it is then rebuilt over a town previously named Filipowice, by Woloczko Przsluzyc, a landlord of Red Ruthenia. [5] In the same year, Rohatyn receives Magdeburg rights from King Władysław II Jagiełło of Poland, establishing the city under its own commercial control. [2] 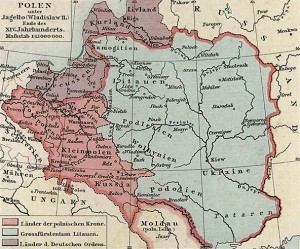 1463 – First documentation of Jews in Rohatyn. Shimshon of Żydaczów is recorded as trading cattle in the Rohatyn market. [1]

1509 – Rohatyn is burned by Bogdan III the One-Eyed, Voivode of Moldavia, shortly before his ultimate defeat in Poland. [5]

1520s – According to legend, a young Ruthenian woman and Rohatyn native named Roxelana is abducted by Tatars as a slave, selected for the harem of Suleiman I the Magnificent, becomes his favorite wife (haseki sultan), and ultimately wields great power in the Ottoman Empire.

1562 – The 26-year-old Piotr Skarga serves as parson of the Catholic church in Rohatyn. In later years he would become a Jesuit, a famous orator, and a leader of the Catholic counter-reformation. About 350 years later, Rohatyn’s Polish “Red School” would be named for him.

1569 – The Union of Lublin establishes the Polish-Lithuanian Commonwealth; Polish kings will rule Rohatyn for another 200 years.

1582 – Mendel Izakowicz leases the collection of taxes on liquor in Rohatyn. [1]

1589 – As a sign indicating the importance of Rohatyn to other faiths, a Stauropegial Brotherhood is formed in town, reporting directly to the Patriarch of the Orthodox Church. [9, p. 166]

1614 – A Dominican monastery is founded north of the rynek, in what is now the city’s market area. [2] 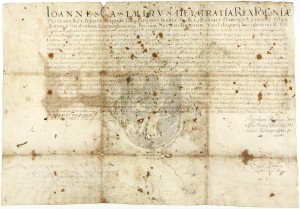 1633 Mar 27 – Privileges given to Jews of Rohatyn by Władysław IV Waza of Poland. [3 TSchn II 099] Rohatyn Jews receive municipal rights to build a synagogue and a cemetery, and to trade. [1]

1644~5 – The wooden Church of the Holy Spirit is founded on an island in the Hnyla Lypa River west of Rohatyn. [2]

1648~1657 – The Khmelnytsky Uprising (Cossack Rebellion) pits the Cossack Hetmanate and Orthodox Ukrainian peasants against Roman Catholic landlords and their Jewish leaseholders; massacres and reprisals terrorize both sides throughout the region around Rohatyn. [1] [4 Gzeyres Takh Vetat]

1666 – The Roman Catholic St. Nicholas Church is founded on the east side of the Rohatyn rynek. [2] 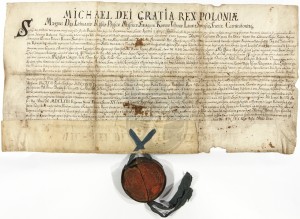 1669 – Confirmation of the privilege for Jews to have a market day on Tuesdays, and to own a house in the market place, by King Michał Korybut Wiśniowiecki of Poland. [3 TSchn II 100]

1700~1710 – Hayim Malakh establishes a messianic Sabbatian Jewish community in Rohatyn and nearby towns; as his heretical beliefs become known in the larger Jewish community, he is persecuted by other rabbis and expelled from Poland. However, the movement continues in the area.

1710 – The taxable adult population of the Rohatyn District is counted: 1730 people, including 282 Jews, most of whom lived in the town of Rohatyn itself.

1718 – Jews are restricted from collecting taxes, customs, and rent, and hiring Christian servants. [1]

1725 – An inventory is conducted of the (taxable) properties and businesses in Rohatyn District; many Jews are individually named on the rynek and within town.

1729 – The wooden St. Nicholas Church is founded near the old Jewish cemetery. [2]

1740s~1760s – Start and rapid rise of Hasidic Judaism, a mystical branch of Orthodox Judaism, in eastern Poland and western Ukraine under the leadership of Rabbis Yisroel ben Eliezer (the Baal Shem Tov) and Dov Ber ben Avraham, the Meggid of Mezeritch.

1755~1759 – The Rohatyn Jewish family of Elisha Schorr hosts the heretical Jewish leader (and self-proclaimed reincarnation of Sabbatai Zevi) Jacob Frank with some of his followers in town, during the heyday of Frankism in the region. [6, p.21] Protest by the traditional Jewish community turns to claims of transgressions against orthodox Jewish law, including adultery and orgies; along with others, Schorr’s daughter Chaya is accused at a rabbinical court in Satanów of having sexual relations with several men, with the knowledge and permission of her husband. [1] [8, p.25] Schorr’s sons participate in a religious disputation conducted by the bishop of Kamieniec Podolski; success by the Frankists over the rabbis results in an order to destroy all copies of the Talmud in Poland. Later many Frankists abandon Judaism completely; Frank himself was baptized in Lwów cathedral in 1759. [1] [6, p.26]

1765 – Just before the Polish crown loses control of Rohatyn and the surrounding region, the Jewish population of the town is counted at 797 people. 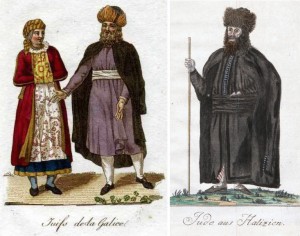 1772 – The First Partition of Poland ends the Polish-Lithuanian Commonwealth; the Kingdom of Galicia and Lodomeria is established under Maria Theresa, Empress of the Austrian Habsburg dynasty. Rohatyn is under Austrian imperial rule for the next 145 years.

1776 – Jewish autonomy is cancelled. Heavy taxes are placed on Jews and the collection of debts. [1]

1782 Jan 2 – Emperor Joseph II issues an Edict of Tolerance, intended to make Jews useful to the state. It allows Jewish children to attend schools, adults to work as merchants and open factories, and eliminated selective taxation on Jews, but it forbade the use of written Hebrew and spoken Yiddish.

1784 Jul 27 – Joseph II issues an edict to survey and classify all of the houses, land, and agricultural outputs of the entire Austrian Empire. The registers progress for four years and are nearly completed in 1788, providing a detailed perspective of the population and land of Rohatyn, Galicia, and the Empire. [7 23:1; p.12-13; Andrew Zalewski, “Early Galician Population Surveys”]

1787 Jul 23 – Joseph II issues a decree (“Das Patent über die Judennamen“) requiring Jews of the Austrian-Hungarian Empire to adopt a Germanic surname by the first of the following year.

1788 – A Jewish school is established in Rohatyn by H. Homburg, and headed by a teacher named Kornfeld. [1] 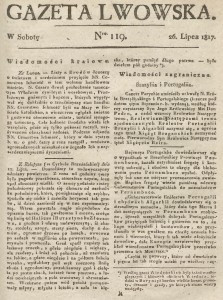 1808 – Formation of the Rohatyn kahal, an elected Jewish bureaucracy. The kahal controlled the income of the community through taxes, and paid wages to the rav (Rabbi), the shames (beadle), the sofer (scribe), the shochet (ritual slaughterer), the chazan (cantor), and the bath attendants. [7 17:1; p.12-13; Jacob Weiss, “Lemberg to Warsaw”]

1846 – An imperial cadastral survey and map are completed in Rohatyn.

1846 – The peasant uprising of 1846, also called the Galician Slaughter. A revolt against serfdom, but the Austrian government uses the uprising to suppress a growing rebellion sparked in Kraków by nationalist Polish nobles intending to re-establish an independent Poland. A few thousand are killed, more than 400 manor houses are destroyed, and croplands are heavily damaged (leading to further famine). The parliamentary Estates of Galicia are disbanded.

1848 – A wave of revolutions now called the Spring of Nations affects most countries of Europe for over a year. Turmoil in the Austrian Empire leads to the abolition of serfdom in Galicia.

1860 – Destruction of Jewish metrical books in Rohatyn by fire.

1868 – Conditions of the Jews of Rohatyn begin to improve. Jews are allowed to vote for candidates to the town council. [1] 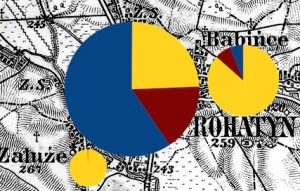 1880 census data for Rohatyn and its neighboring villages. Click the image to see a wider map of the area.

1869 – The total population of Rohatyn plus the conjoined village of Babińce (Babintsi) is counted at 5948.

1880 – The Austrian census records growth of the settlement of Rohatyn+Babińce to 6548. Of those, 48% are Jewish, 38% are Greek Catholic, and 14% are Roman Catholic. In the original town of Rohatyn alone, Jews make up just under 60% of the population.

1890 – The town’s population continues to grow, reaching 7188, with new additions in each religious group.

1900 – Population in the settlement of Rohatyn+Babińce is flat overall (7201), and for the first time, the number of Jews has decreased.

1904 – A synagogue is built in Rohatyn with beautiful murals. A complementary Hebrew School is established, headed by Rafal Soferman. [1]

1906 – Scholars advising Austrian Archduke Franz Ferdinand, heir to the imperial throne of Austro-Hungary, address growing ethnic and nationalistic unrest throughout the Empire with a proposal to federalize the dual monarchy into 14 self-governing states drawn around ethnic concentrations, a new United States of Greater Austria. Had Franz Ferdinand succeeded to the throne, Rohatyn would have become part of the new state of Ost-Galizien (East Galicia), with a Ukrainian ethnic majority.

1907 May – Austrian parliamentary elections in the 29th District (including Rohatyn) turn ugly, and prompt Jewish and Ukrainian voters to join forces against the Polish-Austrian establishment in an unsuccessful effort to gain representation.

1910 – A Polish gymnasium is established. [1] The population of Rohatyn (now officially combined with Babińce) has grown again, reaching 7665.

1914 Jun 28 – Austrian Archduke Franz Ferdinand and his wife Sophie are assassinated in Sarajevo. Although the event occurs 1000km away, within four years it will result in the near-total destruction of Rohatyn.

Inventory of the Rohatyn District in 1725

The 1907 Austrian Parliamentary Election in Rohatyn

See also the general references on the history outline page.