Jewish life in Galicia and Poland wasn’t only religion, business, and politics; Jews there also developed a rich artistic culture, both classical and modern, over several hundred years. But the 19th century was rough in Rohatyn and its region; ethnic strife, pandemics, and wild weather made the economic and social situation difficult for everyone in town. Still, many Jews continued to yearn for something more, and some even made a living from the performance arts. Jewish music took religious, classical, and popular forms, and many of Rohatyn’s residents enjoyed it on many occasions. 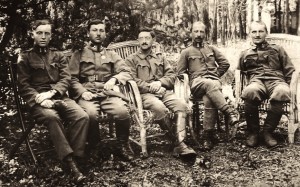 Another avenue for expression and entertainment was Yiddish theater [1]. The Rohatyn Yizkor book includes the memoirs of Ze’ev Baraban (Barban) [2: p.159], who wrote that the Rohatyn of his youth before the Great War was not yet able to support a regular amateur Jewish theater company, and depended for live theatrical entertainment on occasional traveling dramatic companies from Lwów and other large cities. He recalls:

One such occasion that has stayed in my memory from childhood was when a group of traveling actors appeared on stage in the town one evening in the Jewish play, “Der Wilder Mentch” (The Wild Man). The plot of the play escapes me but I remember one of the songs that were sung in it down to the present day. This is the popular song “Tzu fun a shtein bin ich geboiren, tzu hut mich mein mame gehat” (Was I born to a rock or did my mother give birth to me?)

These rare visits in the town by the drama companies would arouse a great deal of interest among the inhabitants and become an exciting event for them. Even as a child I could not miss seeing a single play. We would receive our tickets through my father, Reb Yaakov Baraban, Of Blessed Memory, who was a mail carrier thus enabling us to obtain the tickets.

One example of the visiting drama companies: In June 1913, after a career as a child stage actor, 21-year-old Gershon Rot (George Roth) had his professional Yiddish theater debut in the role of “Ayzikl” (Isaac) in Moshe Richter’s popular play, Herzela Meyuchas (Herzl the Aristocrat, or Yankel the Cart Driver) in Rohatyn. [3] More is known about this play than might be expected for a work written and performed in an almost-lost language, thanks to Zalmen Zylbercweig‘s huge Leksikon fun yidishn teater (Lexicon of the Yiddish Theater), and ongoing translation projects at the Museum of Family History [3] and other organizations. The play, written in 1899, had a difficult start but by 1903 was already being performed in Lemberg, the largest and most influential city in Galicia.

The Digital Yiddish Theatre Project and their reader Josef Gelston have gathered additional information about the play that launched Gershon Rot’s professional career: 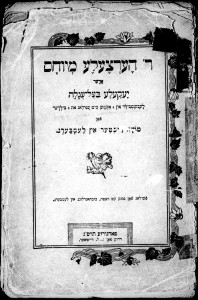 The title is quintessential Yiddish theatre: playful, mocking and signaling a plot revolving around class conflict and the gap between rich and poor. The word ‘meyukhes’, which suggests pride in one’s pedigree and lineage, immediately suggests that Reb Hertsele the patriarch is puffed up about his distinguished or illustrious ancestry.

In his long entry about Moyshe Rikhter, Zylbertsvayg writes that Rikhter was born in Janow, Galicia in 1871 into a family of strict Belzer Hassidim. He took up writing as a yeshiva student and his first plays were produced in Gimpel’s famous Yiddish theatre in Lemberg around 1897. He wrote ‘Hertsele meyukhes’ in 1899 at a time when the issue of lovers running up against class and social divisions in the Jewish community was a big talking-point. However, the actors refused to perform the play because they didn’t like it. Undaunted, Rikhter headed westwards and his play was performed in London, Philadelphia and New York in 1900. In all these places the title seems to have been changed to ‘Taybele’ (Little Dove).

Having seen his play succeed in the US, Rikhter headed back to Lemberg to put on a production in Gimpel’s Yiddish theatre, where it ran for two years. At the same time, productions of the play were put on all over Galicia and across Europe and South America. Zylbertsvayg tells us that many unknown Yiddish actors became stars as a result of playing in ‘Reb Hertsele’ and the play established Rikhter as one of the leading dramatists of the Yiddish stage.

Music for the play was written by the composer Elye-Zalmen Yarikhovski and its songs seem to have been wildly popular. A number like ‘Khave-leye gut shabes’ clearly took on a life of its own well beyond the play it was first written for.

The play Herzl the Aristocrat is not lost; the Internet Archive has preserved scans by YIVO of the full script in Yiddish, published in Lemberg and Podgórze in 1903 by the Yiddish and German languages publisher Verlag von Munk & Roth. [5]

The Digital Yiddish Theatre Project also posted a delightful set of postcards of scenes from the play performed in Kraków just after the turn of the 20th century, with these comments: 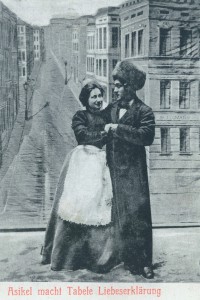 This set of postcards from Krakow is both remarkable and revealing. Issued around 1902-4, the cards show local actors in scenes from early Yiddish theatre and music-hall, complete with painted backdrops. Each postcard contains a photograph of a theatrical sketch or scene and a brief Yiddish title or snatch of dialogue (though the Yiddish is not written in the usual Hebrew alphabet but transliterated, presumably in order to appeal to as wide an audience as possible). 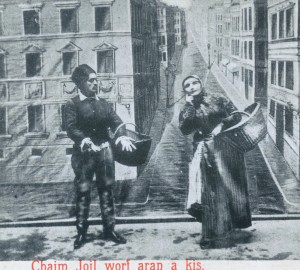 Chayim Yoyel interjects with a kiss. [4]

The actress and actor shown on several of the cards are Sally and Philip Weisenfreund, known in  Yiddish theatre circles as Saltshe (or Sali) and Fayvl Vayznfraynd. Both came from small towns in Galicia. They spent much of their early careers performing in Krakow and Lemberg and touring farther afield to Budapest, Vienna and London. The Weisenfreunds moved on to New York with their three boys in 1902. All three boys had careers in the performing arts, notably their youngest son, Morris, who under the name Paul Muni went on to become a major star in Hollywood. The DYT project notes continue:

We also know something about the song ‘Chave Leie git szabes’ thanks to the pioneering scholarship of Professor Leonard Prager. In an article on London Yiddish music hall, he reproduces the text of several Yiddish songsheets from the York Minster featuring the Weisenfreunds. One of them is ‘Khave-Leye, gut shabes’ / ‘Eve-Leah, Good Sabbath’. It’s a rhyming song about the burdens Jewish women face preparing for the Friday night family meal. The opening lines (with Prager’s translation) are: 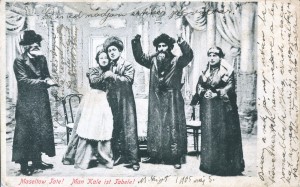 Mazeltov, Father! Taybele is my bride! [4]

Friday is a pain, a plague
Everybody knows it, charcoal fumes and smoke
You work hard, no rest for even a minute
Baking khale*, chopping lime, putting in the tsholnt*
Last-minute shopping, knitting
And all this has to be done in a day

No wonder Ze’ev Baraban was captivated by the theater. He continues: 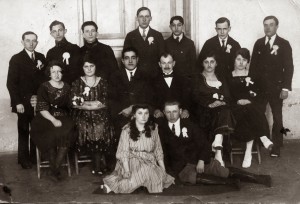 As I began to grow up these plays aroused my imagination more and more and in a relatively short time I and my friends organized a dramatic club in the Otrakvistit gymnasium where the ‘star’ was someone we now know as Dr. Tzvi Zohar and where I would appear on stage playing the flute. The club did not last very long because World War I soon broke out and Rohatyn and its youth were swept into the bloody storm.

The Great War brought much devastation to Rohatyn. But the war had been over for less barely two years when a production of Shakespeare’s King Lear was presented at the gymnasium in Rohatyn (in what language is not known) by the Jewish Leadership group in December, 1920. The Rohatyn Yizkor book includes a photo of the cast [2: p.159], identifying the cast members (right to left, rear to front) as: Chaim Drooks, Avraham Tupp, David Prageh, Fishel Weiler, [Unknown] Guttwort, Yaakov Foist, Shaul Pancher, Hinde Baum, Tova Baraban, Dr. Leibush Zlaks, Yitzchak Bernstein, Tunke Horen, Reize Leiter, David Rosenstein, Devorah Hoizer. 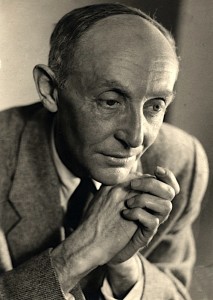 It was only after the war that attempts were again made to organize dramatic clubs among the students [Despite anti-Jewish ethnic violence, in Galicia] Jews enjoyed a certain amount of internal autonomy. This was because the battling parties, the Ukrainians and the Poles, both needed the Jews on their side and this was the time when “dramatic” groups began to be organized in our town. It was something new among the youth. Amateur groups were organized by Dr. B. Zlatkes and they presented a number of plays. The same thing happened among the workers of our town who organized actors’ groups where I presented the play “Der Beitler Altz Millionaire” (The Beggar as Millionaire). This play was quite successful which led to our presenting the play by Gordon, “G-tt Mentch und Teivel” (G-d, Man and Devil). The devil was played by my good friend Max Fuld and it even received favorable reviews from the Lemberger Taggeblatte which considered me to be a good director but found some weaknesses in the play. 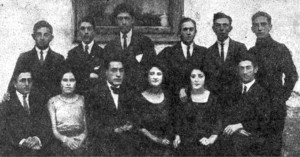 The cast of Seder Night in Rohatyn. [2]

This page is part of a series on Jewish Culture in Rohatyn and beyond.