A History of the Jewish Community of Rohatyn

We are not professional historians, but we appreciate the value of history in contemporary life. We agree with others that “history, saved and preserved, is the foundation for future generations.” 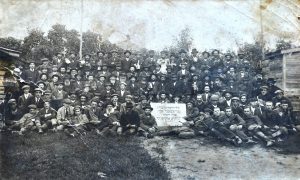 This page is an outline to a brief and selective history of the Jewish community of Rohatyn, told on other pages linked below. The history is organized as a timeline over four pages, each of which links to other pages expanding on specific events, people, or themes. Although the focus is on Rohatyn and its Jewish community, other events and perspectives are included to give context to the timeline; Jews were neighbors to Ukrainians and Poles in Rohatyn, and none of the stories can be separated from the others. Variety is the dominant theme of Rohatyn history, even within the Jewish community itself.

The groundwork for all current history research on Jewish Rohatyn began after World War II by survivors and pre-war emigrants, culminating in the Rohatyn Yizkor Book, the Rohatyn section of the Pinkas ha-kehillot Polin, and several personal memoirs. Essential additional material continued to be developed with care for the rest of their lives by Rohatyn experts Jack Glotzer, Jacob Hornstein, Fishel Kirschen, Herman Skolnick, and Howard Steinmetz, among many others to whom we owe a tremendous debt. The timelines presented here were built on an original outline researched and published by Dr. Alex Feller on the private website of the Rohatyn District Research Group (RDRG), and many of the original documents and archive records linked here were originally acquired by Alex for the group. Significant additional material has been contributed by other members of the RDRG, particularly Edgar Hauster, Logan Kleinwaks, Michael Bohnen, Donia Shwarzstein, Rosette Faust Halpern, Sylvia Lederman, Phyllis Kramer, and Dr. Andrew Zalewski. We look forward to long-term joint research with Alex and all the members of the RDRG. We are also very pleased to acknowledge the guidance and information provided by the directors and staff (and friends) at several history institutions, including YIVO, the Center for Urban History of East Central Europe, JewishGen, Gesher Galicia, Jewish Records Indexing – Poland, Yahad – In Unum, and Rohatyn’s own local history museum “Opillia”. And we are especially grateful to the many RDRG members who have shared images and stories of their ancestors with us for use on this public website, so that this history of the Jewish community of Rohatyn can be open, visual and human.

All histories depend on imperfect sources; the histories of small communities must rely heavily on memoirs and personal testimonies, which sometimes conflict with documents and with each other. We acknowledge that some history will never been known, and that the results of our research will always be incomplete.