The Value of History

For a people with a 3000-year timeline in archaeological evidence and historical records, having a celebrated focus on literacy and learning, and recognized as the authors of a collection of histories shared by the Abrahamic religions on the origin of the world and man’s evolving relationship with God, until the past two centuries Jews had a seemingly indifferent regard for history — as we define it today. 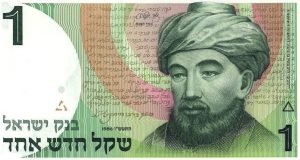 The twelfth-century Rabbi and philosopher Maimonides, known by the acronym Rambam, was renowned in his own time and has been through all the centuries since as a scholar of unparalleled talents and wisdom. Born in southern Spain under Moroccan Berber Muslim rule, he became a skilled physician, legal theoretician, scientist, and teacher, writing prolifically in Arabic and Hebrew, and thereby spreading advanced Arabic sciences into Europe. Surprisingly modern in his approach to science, he wrote that “man should believe only what can be supported either by rational proof, by the evidence of the senses, or by trustworthy authority”. [1] It is thus somewhat shocking to modern readers to learn that he wrote that historiography (the writing of history), and “the reading of books found among the Arabs describing historical events, the government of Kings and Arabs generally, is a waste of time” [2]. Some reviewers have characterized Maimonides, and Jewish philosophers after the biblical period in general, as “consciously unhistorical”, but another view is that a primary Jewish focus is on the meaning of history more than its chronicles.

The late Yosef Hayim Yerushalmi (1932~2009), professor of Jewish History, Culture, and Society at Columbia University for nearly 30 years, explores the relationship between history and meaning in a series of lectures he gave in 1980 and 1987, transcribed in Zakhor: Jewish History and Jewish Memory [3]. Speaking about the Middle Ages in general and about Maimonides in particular, he says:

Medieval Jewry created scintillating works in a number of fields that had never been cultivated before. Stimulated by close contact with Arabic culture, Jews blazed new paths in philosophy, science, linguistics, secular and metrical Hebrew poetry, none of which had precedents in the Talmudic period. Only in historiography, a field in which Islamic civilization excelled and forged an important tradition, did a similar interaction fail to take place. Deeply affected by Muslim philosophy, Maimonides in the twelfth century expressed only contempt for Muslim historical works… [3, p. 33] 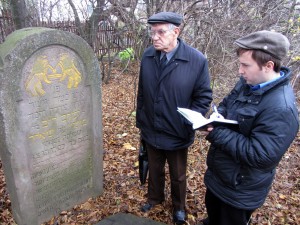 Another form of history and memory, in Rohatyn. Photo © 2012 Jay Osborn.

Yet, the Bible is filled with histories, and recitation of those histories is a fundamental means within Judaism of developing and strengthening collective memory. Yerushalmi contrasts the different methods and perspectives:

We have learned […] that meaning in history, memory of the past, and the writing of history are by no means to be equated. In the Bible, to be sure, the three elements are linked, they overlap at critical points, and, in general, they are held together in a web of delicate and reciprocal relationships. [I]n the Bible, […] historiography is but one expression of the awareness that history is meaningful and of the need to remember, and neither meaning nor memory ultimately depends on it. The meaning of history is explored more directly and more deeply in the prophets than in the actual historical narratives; the collective memory is transmitted more actively through ritual than through chronicle. [3, p. 14~15]

Now Yerushalmi has pinpointed history’s purpose, from the past Jewish perspective, and why some histories are retained while others are allowed to vanish:

Not only is Israel [the Jewish population] under no obligation whatever to remember the entire past, but its principle of selection is unique unto itself. It is above all God’s acts of intervention in history, and man’s responses to them, be they positive or negative, that must be recalled. Nor is the invocation of memory actuated by the normal and praiseworthy desire to preserve heroic national deeds from oblivion. Ironically, many of the biblical narratives seem almost calculated to deflate the national pride. For the real danger is not so much that what happened in the past will be forgotten, as the more crucial aspect of how it happened. [3, p. 11] 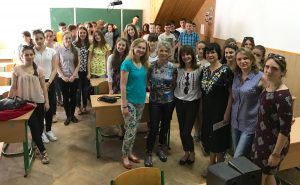 History as an investment for the future.
Photo © 2017 Marla Raucher Osborn.

Jewish and other historians have documented a diminishment of Jewish collective memory in the nineteenth century and since, corresponding to a rise in Jewish nationalism in the same period, as well as the practice of and regard for historiography in the modern sense. As a historian himself, Yerushalmi analyzes the shifts in Jewish thought carefully, modestly, almost hesitantly, and with considerable humor. But in a speech in 1987, when considering the place of history in modern life, his tone changes and he mounts a vigorous defense of his trade:

[T]he essential dignity of the historical vocation remains, and its moral imperative seems to me now more urgent than ever. For in the world in which we live it is no longer merely a question of the decay of collective memory and the declining consciousness of the past, but of the aggressive rape of whatever memory remains, the deliberate distortion of the historical record, the invention of mythological pasts in the service of the powers of darkness. Against the agents of oblivion, the shredders of documents, the assassins of memory, the revisers of encyclopedias, the conspirators of silence, against those who, in Kundera’s wonderful image, can airbrush a man out of a photograph so that nothing is left of him but his hat — only the historian, with the austere passion for fact, proof, evidence, which are central to his vocation, can effectively stand guard. [3, p. 116]

Yerushalmi echoes Maimonides’ regard for science in his own appraisal of history. In the more than 30 years since he spoke these words, many significant changes have occurred in the world, some tremendous (the collapse of the Soviet Union, and the independence of Ukraine) and some more subtle (a return of nationalism and isolationism to the politics of Europe and America). Yerushalmi’s remarks on the value of history remain important today. Emphasizing again the meaning of history and its power to protect righteousness, Yerushalmi asks:

These concerns are hardly limited to Jewish history. A group of American historians, museum directors, and librarians formed a society in 2012 to discuss and promote the value of history in contemporary life, to develop best practices in the teaching and use of history, and to engage the public in projects and dialog. The program they started is called the History Relevance project, and it has grown significantly in the several years since its inception. A key outcome of their early discussions is the value statement reproduced in full below, describing seven ways that history is essential. [4] Although written for Americans, the message is meaningful anywhere:

SEVEN WAYS THAT HISTORY IS ESSENTIAL

Identity – History nurtures personal identity in an intercultural world. History enables people to discover their own place in the stories of their families, communities, and nation. They learn the stories of the many individuals and groups that have come before them and shaped the world in which they live. There are stories of freedom and equality, injustice and struggle, loss and achievement, and courage and triumph. Through these varied stories, they create systems of personal values that guide their approach to life and relationships with others.

Critical Skills – History teaches critical 21st century skills and independent thinking. The practice of history teaches research, judgment of the accuracy and reliability of sources, validation of facts, awareness of multiple perspectives and biases, analysis of conflicting evidence, sequencing to discern causes, synthesis to present a coherent interpretation, clear and persuasive written and oral communication, and other skills that have been identified as critical to a successful and productive life in the 21st century.

Vital Places to Live and Work – History lays the groundwork for strong, resilient communities. No place really becomes a community until it is wrapped in human memory: family stories, tribal traditions, civic commemorations. No place is a community until it has awareness of its history. Our connections and commitment to one another are strengthened when we share stories and experiences.

Economic Development – History is a catalyst for economic growth. People are drawn to communities that have preserved a strong sense of historical identity and character. Cultural heritage is a demonstrated economic asset and an essential component of any vibrant local economy, providing an infrastructure that attracts talent and enhances business development.

Engaged Citizens – History helps people craft better solutions. At the heart of democracy is the practice of individuals coming together to express views and take action. By bringing history into discussions about contemporary issues, we can better understand the origins of and multiple perspectives on the challenges facing our communities and nation. This can clarify misperceptions, reveal complexities, temper volatile viewpoints, open people to new possibilities, and lead to more effective solutions for today’s challenges.

Leadership – History inspires local and global leaders. History provides leaders with inspiration and role models for meeting the complex challenges that face our communities, nation, and the world. It may be a parent, grandparent or distant ancestor, a local or national hero, or someone famous or someone little known. Their stories reveal how they met the challenges of their day, which can give new leaders the courage and wisdom to confront the challenges of our time.

Legacy – History, saved and preserved, is the foundation for future generations. History is crucial to preserving democracy for the future by explaining our shared past. Through the preservation of authentic, meaningful places, documents, artifacts, images, and stories, we leave a foundation upon which future Americans can build. Without the preservation of our histories, future citizens will have no grounding in what it means to be an American.

A young Rohatyn girl looks on as the Hebrew writing on a Jewish headstone found at the riverside near her home is translated by a visiting descendant. Photos © 2011 Jay Osborn.