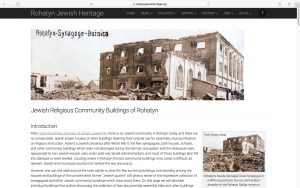 Snapshot of a heritage page from the RJH website, in English.

Not everyone can visit Rohatyn in person, and any full history of people and places in town is too large for signs and other physical information platforms. This website is a key online resource to complement the physical sites, documenting the heritage and our preservation projects, as well as the history of the Jewish community in Rohatyn and its descendants around the world. The website serves as an entry point for heritage supporters and anyone with an interest in the town, but in addition to the website we also significantly employ social media to spread information about Rohatyn and to welcome remote engagement with our local work.

Read about the history of the Jewish community of Rohatyn.

Take a virtual tour of the surviving Jewish heritage in Rohatyn.

Read about our heritage preservation projects.

The goals of the Digital Information Project are to:

As described below, significant progress has been made on this project, in particular the Rohatyn Jewish Heritage website and social media engagement. No funding has been raised specifically for this work; individual donations are allocated only for translations and for annual website hosting and application fees. All development work is contributed by volunteers, primarily RJH staff, at no cost to the project. 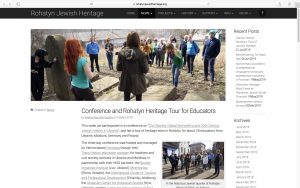 Snapshot of a news article from the website, in English.

This website is the primary objective of the digital project. Rohatyn Jewish Heritage uses the website to gather and publish the results of our research, the progress of our projects, plus summaries and links to reference materials in many formats. The website also gives an overview of the management of the RJH NGO itself, and how others can support our work through volunteer action and donations of materials and money. Development of this website and the information it incorporates addresses the key Rohatyn Jewish Heritage objectives of commemoration and education, and provides both a point of first contact for Internet visitors and a collecting point for data, images, and other resources.

The website has matured over the past several years, but there is still much we hope to add and update: more and varied thematic histories, Jewish cultural history in the Rohatyn region, more complete data and interpretation of recovered headstone fragments, additional interviews with survivors and witnesses to the Shoah and pre-war life in Rohatyn, and education resources for cross-cultural understanding here and abroad. Although the information on our website is gradually growing and evolving, an important feature of the website is its persistence: even when we are doing physical work at the heritage sites in Rohatyn and the region, or attending meetings or conferences, the website is up and open to anyone looking for information from anywhere in the world. In addition to ordinary computer system backups, our website material is even occasionally crawled by the Internet Archive’s “Wayback Machine” so that a record of the site will persist beyond us.

The website is built on WordPress, to simplify styling and interactivity. That choice also somewhat limits our ability to customize the website, for example to directly incorporate databases and applications; we will explore other site options for those features when we are ready to add them. 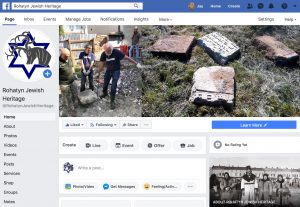 In addition to the News section of our website, where we post periodic articles about significant events related to the heritage and our projects, Rohatyn Jewish Heritage also maintains a very active Facebook page where we report in real time on a wider variety of news and events. We use Facebook to alert others to planned volunteer events in Rohatyn, to coordinate meetings and group activities, and to announce new developments in many of our projects, including new pages on our website; the network functions well in the reverse direction also, allowing Rohatyn residents to message us about relevant events and discoveries in town. Thanks to web-enabled mobile devices, we are able to report activities and findings even as they happen, for example during cemetery clearing days, or as Jewish headstones are recovered.

Equally important, Facebook enables us to report on news and events which are outside of our core focus on Rohatyn, but still important to regional and European heritage preservation. We used our Facebook account and social media connections in 2018, for example, to rally volunteers and donations to support a flash rescue of Jewish headstones buried under a street in Lviv, a project organized and led by the Lviv Volunteer Center. We also use the account to report when we participate in Jewish heritage travel with friends and colleagues in Ukraine, Poland, and Moldova, highlighting both the variety and commonality of histories, heritage features, and issues across these lands.

Databases and Other Digital Collections 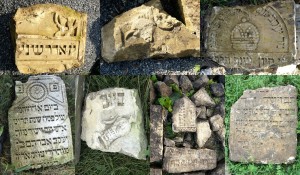 One formal database is currently planned but not yet implemented as part of this and other RJH projects: documentation of and web access to information about the materials, sizes, and epitaph inscriptions on fixed and recovered Jewish headstones (most of which are fragments) in the cemeteries of Rohatyn; photographs of each headstone or fragment will also capture the color of the stone and any historically-applied paint, plus the symbols in carved surfaces. This task is shared with the Jewish Headstone Recovery Project and the Old Jewish Cemetery Rehabilitation Project, as the recovered stone fragments are returned to the old cemetery for commemoration and display. At present the individual headstones are photographed and the images archived, with a large selection of images and some translated epitaphs exhibited on a public website. See the linked project pages above for more information about the database project. 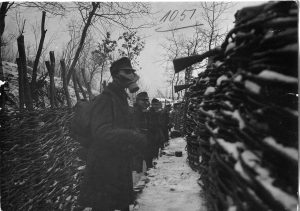 Less formal collections of data and media are also exhibited openly within several website sections. We have gathered and analyzed census data on the Jewish and general populations of Rohatyn and the region over two centuries to support critical review of historical social and economic changes. We have digitally presented a selection of historical maps of Rohatyn and the area in an overlay format with modern satellite images, to permit study of the historic neighborhoods, the overall development and urbanization of Rohatyn, the evolution of towns and villages surrounding Rohatyn, and other physical changes in the city center and surrounding area over time. Historical photos of pre-war life in Rohatyn appear throughout the website, and in a few thematic pages such as one on military training exercises in Rohatyn in 1916, during the Great War. We have also linked to pre-war film to give a moving sense of life in the bustling city.  Summaries of memoirs, interviews, and testimonies from both Jews and Ukrainians who lived in Rohatyn in the 20th century (many of them during World War II) provides key source material for the study of those difficult times. We also provide brief summaries of well over 100 print and digital references (books, essays, web sites, etc.) directly applicable to heritage preservation, regional history, Jewish culture and arts, genealogy, tourism, and intercultural dialogue. Finally, we accumulate and list links to external media coverage of Rohatyn Jewish Heritage and related heritage topics in multiple languages and from many sources. 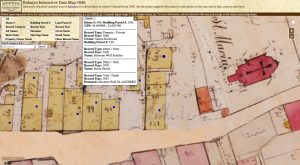 Beyond databases and collections, active digital applications may permit RJH and others to better analyze and interact with the Jewish history and heritage of Rohatyn. We recognize an important opportunity to develop applications for mobile devices which guide visitors on walking and driving tours of the heritage sites, neighborhoods, and the surrounding towns and villages in the district. This project should of course be developed jointly with the city office in Rohatyn and especially the Rohatyn “Opillya” museum (a center of tourism in the city), in order to interact well with other tourism apps focused on Rohatyn and the area.

Another interactive mapping application, currently in development by the Jewish genealogy organization Gesher Galicia, aims to associate archived genealogical records data about individuals and families who once lived in Rohatyn with the places where they lived. This project layers records data onto an 1846 cadastral (property tax) map of Rohatyn created under the Austrian empire, with the ability to pan, zoom, and vary the opacity of the historical map over a modern satellite image of the town, while permitting data search and location query operations to study who lived where and when, throughout the 19th century; the tool is not limited to only Jewish families (though there are large gaps in available records for all of the historical communities of pre-war Rohatyn). The application builds on an earlier mapping project prototyped by RJH, using Gesher Galicia graphical and other records data indexed from regional archives for the Rohatyn District Research Group (RDRG), an online genealogy group composed mostly of descendants of Rohatyn Jewish families.

It is easy for us and anyone to imagine other possible and interesting digital applications which use and study the history and heritage of Rohatyn’s Jewish community: a tool to aid in matching separate headstone fragments from the same stone, as a supplement to the online matzevot database; a 3D re-imagining of the city before its destruction in the Great War; etc. Pursuing development of these and other applications awaits available resources which are currently deployed on other projects. 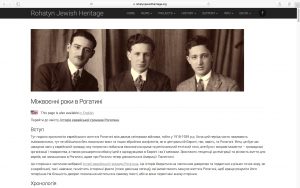 Snapshot of a history page from the website, in Ukrainian.

Communication is a key challenge for all of the projects managed by Rohatyn Jewish Heritage. The history and peoples of Rohatyn make it especially so: all of the several languages once used by Rohatyners in the past are still in use by residents or descendants today, but in general none of the interested groups speaks as many languages as they did when they were neighbors in Rohatyn. We are creating most of this website in English, increasingly a dominant language on the Internet, but to share with all of the people most interested in our work we need to reach out in other languages, particularly Ukrainian. Our strategy is to create mirror pages on the website in both English and Ukrainian using accurate human translators so that the same information is available in each language version. In addition to occasional volunteers assisting with translation work, we have excellent long-term working relationships with friends who render the majority of the translations for the website and digital media projects. Our goal is to make the website 100% bilingual with a few key pages in additional languages; typically any page created in English is available online in Ukrainian within several weeks of the English version.

The structure of the Rohatyn Jewish Heritage website is stable and the development strategy is clear; we continue to update existing pages and create new pages to augment the available information as our projects progress. Technical maintenance of the website is limited to calendared file backups and small adjustments to respond to application updates (WordPress and our selected theme) and to data protection and privacy laws. Although development of the website content is a major task for RJH, website maintenance is not.

All of the English-language content on the Rohatyn Jewish Heritage website is developed by the RJH founders as volunteer work at zero cost to the NGO. Our need for transcription and translation services varies significantly from year to year depending on our active projects and events, ranging typically from US$500 to US$2000 per year (see for example our annual reports); that expense range, paid from donations to our NGO, is expected to continue in the coming years. Annual costs for web hosting, theme subscription, backups, and compliance also vary somewhat, with a generally rising trend; currently the cost is around US$250 per year.