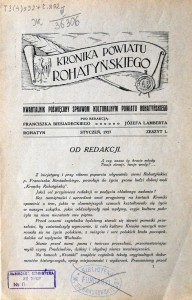 The Stefanyk Library in Lviv, Ukraine preserves several years of a quarterly historical studies publication called Kronika Powiatu Rohatyńskiego (Rohatyn County Chronicle). The journal was printed in Lwów but edited and published in Rohatyn by Franciszek Biesiadecki, Józef Lambert, and later Mieczysław Opałek from 1927 to at least 1933, when the Stefanyk’s collection ends; there was at least one break in publication due to a lack of funds, noted by the editors in their thanks to the Rohatyn City Hall for providing funds to continue. The focus of the journal was the history of the Rohatyn powiat (county, or district), its places, and its people; it has proven to be a valuable source of historical research on Rohatyn and the surrounding towns and villages.

Alex Feller photographed selections from the journal at the Stefanyk (their record number Ж-III-36306) during a visit in 2011. The journal’s contents cover a wide variety of historical topics on Rohatyn and the area, much of it detailing Polish and Roman Catholic architecture and people, to attract readership in the interwar period. But the first quarter of 1933 features an accounting of the Jewish residents of Rohatyn powiat from 1765 until the most recent census in 1921. Robert Gruszczynski translated this article for the Rohatyn District Research Group (RDRG) in 2014; the translation is below, followed by some additional articles and notes from Robert’s review of the journal.

The Jewish population of Rohatyn county from the count dated 1765

The Jews had to pay a c​apita­-tax ​in Poland. The way of its calculation, despite of the name, was not per capita but some “lump sum” which was defined and collected by the Jewish community (​kahal)​. The system proved to be not efficient and not beneficial for the Government Treasury. Kahals collected more and more but the surplus landed in pockets of rabbis and other Jewish seniors. To increase revenues from this source, the Warsaw Conference of the convocational parliament voted in 1764 for a new collection system. A personal tax of 2 Polish zloty per capita was introduced and committees were established to start the basic count in all districts. The committees consisted of 4 persons: 3 Jewish and one Catholic ­ nobleman. After all the Jews were counted, the committees had to report the results to the Town Hall and to swear for the precision/truth of delivered data. The government supervisors were hired ad hoc. The oaths consisted many rigors and spells. One of them we present literally below: 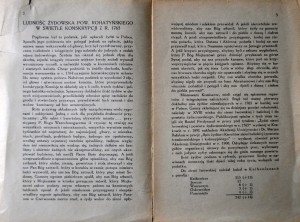 Vol 6 Nr 1 of Kronika Powiatu Rohatyńskiego, at the Stefanyk Library in Lviv. Page 2 begins the article on the Jewish population of Rohatyn powiat.

“We, the rabbi and the one responsible for a quarter, the citizens of the city … swear to the God Almighty that we counted and wrote down all evident Jewish people, being at home or away during the count, from the oldest to the youngest head. We took neither any donations, nor any promises for profits now or in the future. So help us God. And if we counted imprecisely or unjustly let the Lord, who created herbs, the sky and the air, penalize us. We should be smashed by this God, who rescued 8 persons on the ship from the Flood, who burned down with a hellfire 5 cities, Sodom and Gomorrah, who spoke to Moses as a burning bush, who pointed with His own finger the commandments written on the stone tablets. And if we are liars and if we prepared the registry unjust, let the God, who clashed Pharaoh in the Red Sea, and transferred the Jews to a land full of milk and honey, let Him smash us.

And if our register were unreliable, let the God, the same one who fed Jews with manna in the wilderness, let Him put us directly into hell with the soul and the body. And if we were just unfair swearing right now, let us be sinking in the ground like Datan and Abiron, and let us be a leper in the same way like the illness switched from Naaman to Jesse. And if we were lying right now, than we should be excluded from the rights of 10 commandments, which the God passed to Moses on Mt. Sinai. We should be punished in the same way like all those who violate oaths, exactly as described in 5 books. Let us become stones in the same way as Lot’s wife turned into a salt pillar, let a bloody disease never let us live, let us explode at the sight of all citizens. Let us be grabbed by a big disease, let us never come to the bosom of Abraham, and by our God, we will be forever disgraced and condemned and the devils will kidnap us into hell with our soul and body”.

Hired Commissioners were obliged to write down the registers and collect the charge. Thanks to it, we have the first accurate numbers of Jews living in 1765 in each little village in Poland. Communities within the present boarders of Rohatyn county belonged in the eighteenth century to the districts of Lwów, Halicz and Zydaczów. Publications of the results of the count in these districts were prepared by Bostel Ferdinand in his book “The Jews in the Districts of Lwow and Zydaczow in 1765” printed in Krakow in 1891 by the Academy of Sciences, and by Dr. Marian Balaban in his work “The Count of Jews and Karaites in the Counties of Halicz, Terebowla and Kolomyja” printed in the same house in 1900. Everyone who would like to know more about the numbers and about the whole procedure should refer to the above mentioned books .

(Below we are presenting only the numbers referring to our county. Number of Jews in parentheses applies to children younger than 1 year who were free from the personal tax.)

Totals of other Kahals not broken down by towns:

So, all together so many Jewish souls were living in the area of o​ur today’s county. Due to the lack of any statistics regarding the Christian population is not possible to determine the percentage of Jews and Christians, but we have accurate data from the late nineteenth century and here are few for examples.

So the percentage of Jews was decreasing. The same we may observe in cities:

The Privileges of the Rohatyn Jews

(written in a mixture of Latin and Polish)

Original of the document is in the Archives of the Land in Lwow (Archiwum Ziemskiem we Lwowie).

We declare to all together and each one of the those, who should be informed, our wish as per the below letter. According to the laws of the Polish Republic and its cities and all the laws signed by the coronation parliament and by the King, in response to humble request of Rohatyn Jews, we confirm herewith their rights and privileges to: own houses and pieces of land where they live, establish synagogues and chapels (kirchowa), run stores with food, led and beverages, brew beer, produce honey, distill spirits, trade with cattle per piece and herds as well, and all of that in the old/usual marketplace, and all that, without any exception, on equal rights with other citizens in accordance to once given privileges and old customs/habits. They shall also pay taxes based on equal duties with other citizens. They are not obliged to pay any other tributes, but they have to live in accordance with the current laws. All rights and privileges, which the Jews have since previous times, are confirmed herewith, as long as they are not in conflict with general laws, and everyone is obliged to obey the these, because our wish is the everlasting duration of these privileges. To confirm we sign this letter with the royal stamp:
Warsaw, XXVIII of March anno Domini MDCXXXIII, the first year of our reign in the lands of Poland and Sweden Wladislaus rex. Marcus Skibicki Secretary

page 9 Latin not translated (here one can see the signature of another Polish King):
Lwow, XXI of May anno Domini MDCLXIII, our reign in Poland and Sweden XV, Ioannes Casimirus (Jan Kazimierz) rex. Stephanus Hankiewicz secretary.

At the end, the ones of different faith ­ the Jews from Rohatyn, brought us as a supplication to keep the Tuesday’s fair, as it took place since previous times. The Jews are ready to show documents for evidence. We are seeing the destruction and losses made to the Jews by enemies in other countries, so our wish is to see their trade and their profits grow and reassuring, we agree herewith to maintain the Tuesday as the fair day. 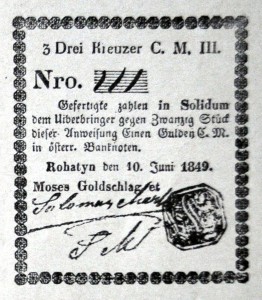 Not long ago, during World War I, many paper vouchers were produced to replace real money and coins. We all know them. But even in moments of small historical riots/revolution, people were issuing coupons. Here we present you some examples dated 1849 and issued in our area. Both specimens come from the collection of the Lubomirski Family Museum in Lwów. The smaller one is from Bukaczowce and the larger one was issued in Rohatyn. (coupons are translated from German) 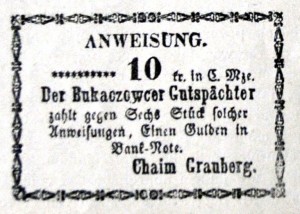 3 Kreuzer C.M.III
No III
The below signing will pay for each twenty such stamps one Gulden in Austrian banknote.
Rohatyn June 10, 1849
Moses Goldschlag and (​handwritten) Salomon Mark, Sekt

On the founding of the city of Rohatyn:
The settlement was first mentioned (1372~­1378) while the Prince Wladyslaw Opolczyk was ruling Red Russia. For unknown reasons the settlement was fully destroyed, and established in 1415 for the second time by a Red Russian Land Lord Woloczko Przysluzyc. He located the city based on German law in a place called Filipowice before and “donated plenty of land”. His son Iwaszko was prosecuted of betrayal and in 1432 the King Wladyslaw Jagiello ordered to confiscate the whole county (Rohatyn and 14 villages. An aristocratic family Chodecki de Powala (from Chodecz in Western Poland) acquired the county (among others) on 24 June ​1433 and started the development and a welfare era ­ even a gold smith established his business (his name was Andrzej and one craft man: Stanisław was his employee). The area became rich and the neighbors were more and more eager to posses it.

A list of additional journal topics:
– the “tragedy of 1509” when Moldavian Prince Bohdan burned down the city and all villages in the area
– the battle with Tatars in 1618
– the battle with Bolsheviks in 1920
– celebration of the 10th anniversary of independence of the Second Polish Republic
– exact descriptions of Catholic and Orthodox churches, their architecture and treasures
– memorials and monuments in the area related to Catholic religion
– description of noble families
– notes about other villages in the Rohatyn county
– Polish society events (donations for a museum, visits of important persons)
– celebrations of the 3​May Constitution Day