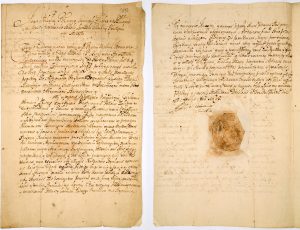 To all and to everyone who ought to know, and where it is important to hear about it, [I announce] that I gave the lease on my Rohatyn District in the current year starting from the holiday of Saint John of June 24, 1693 until, God willing, next year of 1694 ending on the same day. I leased it for the sum of thirteen thousand of polish złoty to honorable burghers of mine, Moszko Juszkowicz and [illegible] Abramko Szajewicz.

Herewith in the town of Rohatyn [and the villages of] Podgrodzie, Firleiow, Czernia, Ruda, [illegible], Kleszczowna, Pottok, Zalipie, Wierzbilowce, and Załuże, and in my entire district of Rohatyn the above-mentioned leaseholders will collect the revenues that are due to me from distillery cauldrons, breweries, wineries, taverns, mills, road tolls that are collected in the town and in the villages. They will waive payments from the bridge collectors who are free to make beer, produce honey and hard liquor [illegible]. It is my order that those tavern owners who reside in the town of Rohatyn provide fourteen large jugs of alcohol to the peasants every week for twenty złoty. The leaseholders ought to make available beer, honey, hard liquor and [sell them] in a just manner. Those suburbanites and burghers who do not trade in alcohol […] [the next page is missing] [1]

To support needs of weddings, I recommend and order that all take seriously payments to the leaseholders of one hundred grzywna for non-indulgence. [2] According to this contract, the leaseholders are to pay eleven thousand złoty in four installments. I defer in the entirety other points of the contract and the decision regarding the past year interest rate, as such these obligations will become future responsibility of the [current] leaseholders. The collection of the interest and the balance owed by Leyb Jakubowicz [past leaseholder] is the responsibility of the current leaseholders. To assure greater attention [to this contract] and its accuracy, I sign in my own hand and confirm by the seal.

[1] The sentence is interrupted at the bottom of the first page. Its full meaning is unclear as the second page of the contract is missing. [2] This is the beginning of the last page of the contract. The meaning is unclear. Note that grzywna was a form of monetary payment. [3] Dźwinogród (today’s Zvenyhorod, Ukraine) belonged to the Sieniawski family; it is located about 20km from Lviv in the direction of Rohatyn.