“Surrounded by spiteful and covetous enemies and by unreliable friends, the Danube Monarchy had only one certain ally – Germany, which for its part regarded the Monarchy as its own only reliable supporter.” 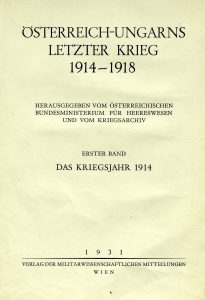 Ten years after the treaty that officially ended World War I, military scientists in Austria, now a small piece of the former empire that had ruled Galicia and much of Europe before the war, began to publish a detailed history of the strategies, troop and materiel movements, and especially the many hundreds of battles which they had recorded and studied during and after the war. The result, titled Austria-Hungary’s Last War, published over several years and in seven volumes, ran to more than 5000 pages, with more than 350 separate maps and an index of over 300 pages. Nearly the entire work is a summary of the military aspects of the war, from its opening words (“Of all the countries which bordered Austria-Hungary, it had been obvious since at least 1909 that three were open enemies…“) to its closing tribute (“Even when the Monarchy itself began to crack apart from deep fissures, the traditional cohesion of the Army continued to demonstrate its astounding power.“). It is as if the military leaders of the defunct empire could only view the recent catastrophe in military terms.

However, the bulk of the text is only slightly tinted, and the rich details are very rewarding. At the remove of a decade, the history helpfully includes the military perspectives of all of the armies involved where the Austria-Hungary forces fought, so the text describes the strategies and actions of not only their own generals, and those of the allied German Empire and Ottoman Empire, but also the opposing Russian Empire as well as smaller forces. Typical of military histories, the details feature the leaders and experiences down to fighting unit levels, without focus on the experiences of individual soldiers or of any civilians in the many hundreds of towns damaged or destroyed by the war. But the military details are so fine and specific that the text and maps can easily serve research into the experience of a single town stuck in the midst of a war which washes over it several times, eroding buildings and people and a way of life with each pass.

Excerpts from the text are included in our timeline history of the Great War in Rohatyn. Here we feature a few maps from the complete work, featuring battles in and around Rohatyn, which help explain how the town was heavily damaged, and nearly destroyed, during the first year of the war. It is far easier to appreciate the significance of the Battle of the Hnyla Lypa (the river which passes through Rohatyn) and the proximity of Brusilov’s Offensive by reviewing these and other maps in the full collection. By 1917 the military action around Rohatyn had ceased (thanks in part to the collapse of the Russian Empire), so the actions depicted in these maps are now more than a century past, but their effect on Rohatyn is still visible in the modern city.

This collection of World War I battle maps is part of a series of historical map pages included in the project Mapping Rohatyn: Geography as a History Resource. 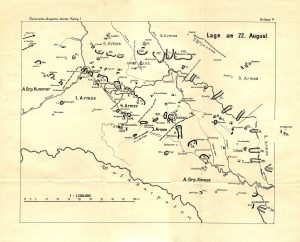 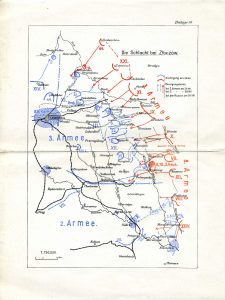 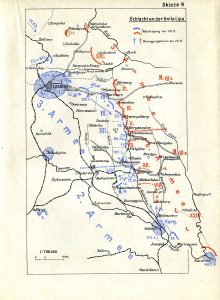 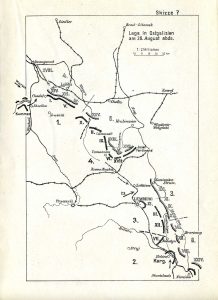 Another view of the intense fighting of 28Aug1914. 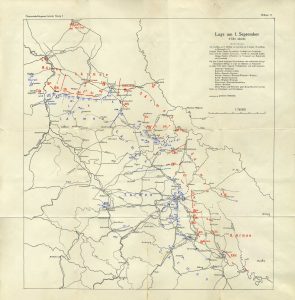 01Sep1914: After the battle sweeps through Rohatyn, the Russian army occupies the town. 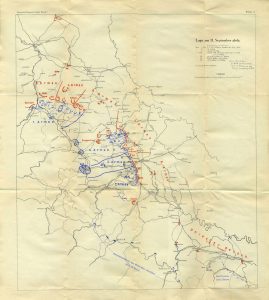 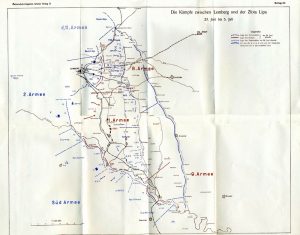