USHMM Encyclopedia: Ghettos of Rohatyn and the Region

Anyone who reads through any significant portion of this volume will find the contents chilling. There is a dismal sameness to each of the stories here: of the Germans’ arrival; of increasing persecution, theft, displacement, abuse, and murder; of the formation of a ghetto and the deteriorating conditions within it; of the inhabitants’ desperate efforts to live and to resist their oppressors; and in every case, of the ultimate destruction of the entire community, save for a tiny number of traumatized survivors. These stories are central to understanding the Holocaust. [Encyclopedia of Camps and Ghettos, Vol. II, p.xxv]

The United States Holocaust Memorial Museum (USHMM) has undertaken a major scholarship effort with Indiana University Press to research, assemble, and publish an Encyclopedia of Camps and Ghettos, 1933–1945. Begun in 1999, the project has published three volumes to date, with another four in preparation. The volumes already published have important material relevant to Rohatyn and the region during the German occupation 1941 to 1944, and at least one of the future volumes will as well. The Encyclopedia is part of a continuing series of USHMM academic publications as compilations, original research, and conference proceedings. 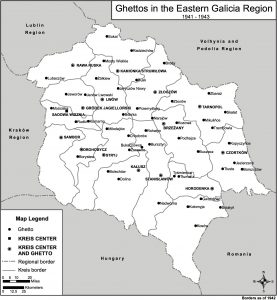 A map of the ghettos of Distrikt Galizien, ca. early 1942, from the Encyclopedia. Image © USHMM.

The breadth of the research is staggering: the Encyclopedia of Camps and Ghettos documents some 42,500 Nazi slave labor sites, ghettos, concentration camps, prisoner-of-war camps, sex-slave brothels, transit camps, and killing factories throughout Europe, creating a first comprehensive reference aiming to list the entirety of the network of sites. Given the scale of the task and the range of sites, the editors do not expect to cover “everything”, but where records exist the coverage is as complete as practical for an introduction to each site, using both outside scholars and internal staff, working with primary and secondary sources, from both perpetrators and victims. A reader’s guide accompanies the Encyclopedia to facilitate working with the thousands of pages which make up the reference.

The seven volumes each address a specific type of site based on its primary function or its role in the network hierarchy. For Rohatyn and the surrounding communities, the key volume to date is Volume II: Ghettos in German-Occupied Eastern Europe, a tome of more than 1500 pages of text plus overview and sub-section essays and a detailed index. When completed and published, Volume VI: Extermination, Labor, and Transit Camps for Jews will also be relevant to Rohatyn and its surroundings, for its coverage of the Bełżec extermination camp where thousands of area Jews were sent to be killed. Volume II is available in pdf format online at the USHMM website in two parts plus a places index.

Rohatyn and its region appear in the ghettos documentation of Volume II, under section III covering the German General Government, in a sub-section focused on the eastern Galicia region labeled Distrikt Galizien within the German occupation administration; German officials counted more than 500 thousand Jews residing in the district at the beginning of the occupation. Of the roughly 1150 east-European wartime ghettos appearing in the full volume, nearly 60 are documented in Distrikt Galizien, including the large ghettos of Lwów, Stanisławów, and Tarnopol. Thirteen of the smaller ghettos were within 50km of Rohatyn: Bóbrka, Bukaczówce, Brzeżany, Burshtyn, Chodorów, Kozowa, Mikołajów, Narajów, Podhajce, Przemyślany, Zborów, Złoczów, Żurawno.

Documented Details about the Rohatyn Ghetto

Although most of the details about the Rohatyn ghetto documented in the Encyclopedia of Camps and Ghettos appeared in earlier books (many of which are also summarized on this website; see below), the Encyclopedia provides important context in the Volume II introductory essays, the essay leading the sub-section on Distrikt Galizien, and in the many individual ghetto texts which parallel that for Rohatyn. In addition, the two pages of text, sources, and notes provide a compact but detailed summary of the key dates, actions, and conditions of Jewish life and death in the Rohatyn ghetto. In these pages one can find both the dismal sameness of the ghetto story, but also the specific details which affected individuals and families in Rohatyn. 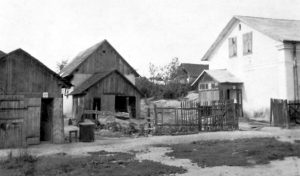 A location in the Rohatyn ghetto where a large Jewish bunker was discovered. Image from the Katzmann report.

Research for the Rohatyn article depends heavily on the Rohatyn yizkor book, the Rohatyn chapter of the Pinkas Hakehillot Polin, a memoir by Alexander Kimel, and the Katzmann report, supplemented by records in the State Archive of the Russian Federation (GARF) and other archives in Ukraine, Poland, the US, and Israel. These supplementary sources provide a number of key details not available with precision from the Jewish memorial books, including the timing of ghetto creation in Distrikt Galizien (Rohatyn, in August 1941, was one of the first), the consolidation date of administrative circles in the district (01Apr1942, which shifted German Security Police oversight for Rohatyn from Stanisławów to Tarnopol), the date the Rohatyn ghetto was ordered closed with fencing (10Nov1942), and the timing of higher-level management directives which drove the overall trends in ghetto establishment, aktions, and liquidations.

Studying the Rohatyn ghetto history has proven frustrating for us and for others, due to a shortage of clear and precise facts about key details concerning its changing boundaries, administration, building stock, etc. (despite the more than half-dozen Jewish memoirs and several Ukrainian witness testimonies which include remembrances of the ghetto and life on both sides of its bounds. The Encyclopedia of Camps and Ghettos provides an important foundation for further research, in an attempt to slow or reverse the erosion of records and knowledge about the last home for many of Rohatyn’s Jews:

Even more so than for the sites of concentration camps and most other types of camps, the physical sites of most ghettos are not marked and are becoming increasingly difficult to identify. As ghettos existed within urban landscapes, which naturally change their appearance over time, little, if anything, remains of the physical structures that formed the ghettos. [Encyclopedia of Camps and Ghettos, Vol. II, p.xlvi]

Following the publication of the second volume, the New York Times published an news analysis article in their Sunday Review about the encyclopedia project, and highlighting both the immense scale of the task and the variety and detail of camp and ghetto experience many victims endured, far from the Auschwitz-Birkenau camp and the Warsaw ghetto which serve as emblems of the Holocaust:
The Holocaust Just Got More Shocking; Eric Lichtblau; The New York Times; New York City, 01Mar2013.

A related article appears as part of the USHMM’s online Holocaust Encyclopedia, with a Rohatyn component:
Resistance in the Smaller Ghettos of Eastern Europe (a project of the Miles Lerman Center for the Study of Jewish Resistance)

Many details of the Rohatyn ghetto appear in Jewish memoirs of wartime life in Rohatyn, and in Ukrainian witness testimonies as well. These personal recollections expand on the basic facts of the ghetto with eyewitness perspectives and vivid descriptions of events.