References and Links: Dialogue and Reconciliation

Political and economic struggles of the twentieth century accentuated ethnic divisions in Europe, and the Rohatyn area was not immune; social constraints during the long Soviet occupation of Ukraine after World War II hindered dialogue and hardened attitudes both in Ukraine and in diaspora communities in North America and elsewhere. Since the fall of the Soviet Union, efforts have begun in east-central Europe to recover lost histories, open research and discussion, and close the gaps between peoples who were once neighbors in the region. Some of those initial efforts are listed here.

Difficult Questions
Kozlowski, Maciej, Andrej Folwarczny, and Michał Bilewicz, editors. 2006. Warsaw, Poland: Jacek Santorski & Co. Agencja Wydawnicza.
A collaborative project between the Forum for Dialogue Among Nations (see below) and the American Jewish Committee which gathers 50 important questions from young Poles and Jews about their shared and separate histories, and answers them with essays by experts in the areas of history, sociology, Polish-Jewish relations, and religion. Some of the topics are specific to post-war Poland, but most are equally applicable to Ukraine. A sampling of questions and answers is also available online.

Jews and Ukrainians: A Millennium of Co-existence
Magocsi, Paul Robert, Yohanan Petrovsky-Shtern; University of Toronto Press; Toronto, 2016.
More than a parallel history of Ukrainian and Jewish people on the lands now bounded by the borders of the Ukrainian state, the book, co-written by North American historians of both ancestries, especially details the separate and intertwined cultural and economic development of the peoples over nearly a thousand years. Diaspora communities formed from both cultures from the late 19th century are also discussed, as vocal contributors to contemporary dialogue. Sidebars throughout the text illuminate common stereotypes and misunderstandings.

Together and Apart in Brzezany: Poles, Jews, and Ukrainians, 1919-1945
Redlich, Shimon; Indiana University Press; Bloomington, 2002.
Based on research and interviews with Jewish, Ukrainian, and Polish residents and former residents of pre-war and wartime Berezhany near Rohatyn, historian and Jewish survivor Redlich assembles a personal and local history of his boyhood town from multiple perspectives and with multiple voices. A landmark historical analysis and a step toward less-hardened memories and reconciliation. The issues and Redlich’s journeys back to Ukraine and Poland are also subjects of a 2014 documentary film created by Slawomir Grünberg and Katka Reszke, titled Shimon’s Returns.

Conflicts of Memory (Herito no. 13)
Purchla, Jacek, editor-in-chief; International Cultural Center; Kraków, 2013.
A bilingual (Polish/English) edition of the Herito quarterly journal concentrated on the landscape of memory in central Europe, and on “memory at war”. Essays discuss the relationship between dialogue and memory, and on how we remember influences what we remember.

Nations and Stereotypes (Herito no. 15)
Purchla, Jacek, editor-in-chief; International Cultural Center; Kraków, 2014.
A bilingual (Polish/English) edition of the Herito quarterly journal discussing issues of and alternatives to how we characterize others, especially our neighbors, as well as problems inherent in taking a narrow view of nationalism. Most of the authors and topics are focused on or from the Polish perspective, but most of the issues raised are relevant to western Ukraine as well, and beyond.

Ukrainian-Jewish Relations in Historical Perspective
Potichnyi, Peter J., and Howard Aster, eds.; third edition; Canadian Institute of Ukrainian Studies (CIUS) Press; Edmonton-Toronto, 2010. Available on the Internet Archive.
A collection of papers from a 1983 conference held in Ontario which was an academic effort to open research and discussion on the dynamic relations between Ukrainians and Jews over centuries, in Europe and more recently in diaspora communities. This third edition contains an updated bibliography of relevant academic studies.

Literature in the Ashes of History
Caruth, Cathy. 2013. Baltimore, Maryland, USA: Johns Hopkins University Press.
A review of psychoanalysis, literature, and politics on the topic of the disappearance of history in Europe.

Forum for Dialogue Among Nations
A Polish non-profit organization whose mission is to foster Polish-Jewish dialogue, eradicate antisemitism and teach tolerance through education. Using traditional seminars and publications together with innovative exchange programs, the Forum is a model for education and reconciliation efforts in Central Europe.

Ukrainian Jewish Encounter
An international non-profit NGO with staff and advisors in Ukraine, Canada, Israel, and the United States, UJE aims to elevate the shared historical narrative of Ukrainians and Jews both in Ukraine and abroad. Through research and educational initiatives, the development of books, exhibitions, films, podcasts, and other media, as well as advocacy on historical and contemporary issues, UJE’s message is “our stories are incomplete without each other.”

Tkuma: Ukrainian Institute for Holocaust Studies
Based in Dnipro, Tkuma is a 20-year-old research center for Holocaust studies in Ukraine which develops materials and programs for education and intercultural dialogue. Tkuma also conducts international scholarly conferences seminars, publishes a journal and numerous monographs and other books, and maintains a community center and museum on Jewish Memory and Holocaust in Ukraine.

Yahad-In Unum
A French non-profit organization established to research the killing sites and mass graves of Jewish and other minority victims of Nazi mobile murder groups in what s now Ukraine, Poland, Belarus, Russia, and Moldova. Uses archival research and field ballistic evidence together with local eyewitness interviews to recover history and locate human remains. Presents findings in traveling exhibitions and the organization website (including an interactive map), and develops public education resources to open dialogue on the difficult past.

Center for Interethnic Relations Research in Eastern Europe
Founded in 2011 in Kharkiv but active across Ukraine, including Lviv, the Center organizes a wide variety of public events to promote academic research and discussion on the history and problems of interethnic relations in Eastern Europe, with a special focus on historical and contemporary Ukraine, and on the study and preservation of historical and cultural heritage. In addition to summer schools on past and present borderlands (physical, symbolic and imaginary), the Center’s current and recent conferences include “How to Teach Multiethnic and Transnational History: Ukraine” (in Lviv) and “Jews in the Ethnic Mosaic of the Ukrainian Lands” (in Rivne). Through its support of deep research and analysis with public review, the Center promotes dialogue and understanding of historical and contemporary interethnic encounters. The Center is affiliated with major academic and research institutions in Ukraine, broader Europe, Israel, and North America. 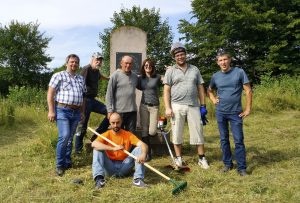 LVC and RJH: Ukrainians, Jews, and others working together on Jewish heritage. Photo © 2018 RJH.

A US-based Christian non-profit organization working since 2010 in Jewish cemeteries in Poland, The Matzevah Foundation (TMF) puts its three principles into action every year: Remembering, Restoring, Reconciling. TMF partners with Polish Jewish heritage organizations, local volunteers, and volunteers from the US and elsewhere who self-fund their own travel, to clean Jewish cemeteries and restore matzevot, monuments, fences, and the intangible connections between descendant Jews and the current residents of towns where these cemeteries survive. TMF has generously shared their heritage preservation expertise and partnership strategies with us at conferences and in meetings, as well as on-site working with us in Rohatyn.

Lviv Volunteer Center
The LVC is a Ukrainian non-profit NGO under the umbrella of Lviv’s charity Hesed Arieh, organized to develop a culture of volunteerism and leadership in the Lviv region through social and civic action, often involving Jewish heritage preservation and rehabilitation. Promotes cross-cultural dialogue and understanding between Ukrainians, Jews, and others via international work projects and social activities. A partner of Rohatyn Jewish Heritage, LVC and RJH collaborate on several heritage projects each year.

Centropa
A Jewish historical institute focused on preserving the stories in 20th-century Jewish family histories from Central and Eastern Europe and the Balkans. Centropa’s Trans.History education program trains teachers and civil society activists in Ukraine and Moldova in the Jewish history of the regions using a variety of media and tools which can be further developed for regional classrooms. Rohatyn’s Jewish past and our current heritage project featured in a three-day conference in 2018.