Most family history records, especially metrical records documenting births, marriages, and deaths, now reside in archives; for Rohatyn and its region, those archives are generally state institutions in western Ukraine (especially Lviv, Ivano-Frankivsk, and Ternopil), but Jewish, Polish, and Ukrainian documents are also found in state archives in Poland, especially in the southeast and in Warsaw. Researching genealogy generally requires individual research, in person or through professional researchers, but guidance on methods and sources has been published by a few pioneers, noted below. Advances in digitization, databases, and search tools over the past two decades has brought significant changes to the practice of genealogy, and today a majority of the latest and most fruitful tools are online.

Ukrainian Genealogy
Pihach, John D. 2007. Edmonton, Alberta, Canada: Canadian Institute of Ukrainian Studies Press.
An introductory guide to genealogy research, including strategies and methods, records searches in Ukraine and abroad, records analysis, the use of historical maps, and with numerous reference sections on alphabets and languages, surname and given name traditions, and the history of the region. Focused primarily on western Ukraine and southeastern Poland, and on people with Ukrainian ancestors, but many of the methods and sources are equally useful to descendants of Jewish and Polish ancestors in the area.

Getting Started in Jewish Genealogy 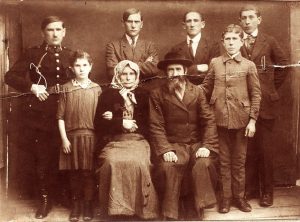 Where Once We Walked, Revised Edition
Mokotoff, Gary, Sallyann Ambur Sack; Avotaynu; New Haven, 2002.
A gazetteer of more than twenty thousand settlements which had historical Jewish communities in central and eastern Europe, cross-referencing contemporary place names to past names in several languages and phonetic equivalents using the D-M Soundex system.

Jewish Roots in Ukraine and Moldova
Weiner, Miriam; Routes to Roots; Secaucus, New Jersey, 1999.
Designed as a handbook for Jewish genealogists, the guide includes an inventory of Jewish records in Ukrainian and Moldovan archive, essays on towns and cities, maps, and more than a thousand photographs.Chapter 1 of the book, a historical background written by Prof. Zvi Gitelman, is available as a free pdf download.

Jewish Roots in Poland
Weiner, Miriam; Routes to Roots; Secaucus, New Jersey, 1997.
Like the similar book on Ukraine and Moldova which followed it, this guide for Jewish genealogists serves as an inventory of records in Poland at state and local archives plus less centralized resources, with a bibliography to related books and articles, a collection of essays by Weiner and others, plus maps and both old and new photographs. Covers portions of Ukraine and Belarus which were part of Poland before WWII.

Rohatyn District Research Group (RDRG)
The RDRG is a closed genealogy research group with descendants of Rohatyn families living all over the world. Primarily focused on Jewish family research for pre-war Rohatyn, the group scope has expanded to include nearby towns in the Rohatyn District, and to include a number of Polish and Ukrainian descendants and supporters. Supported by a data-rich internal website and an email forum, it also has an open interest group on facebook. Founded and managed by Dr. Alex Feller. More information about the group is available on this site on the history page “Jewish Rohatyners Today“.

JewishGen
The largest Jewish genealogy organization in the world, and an umbrella organization for special interest groups (SIGs) covering every region in which Jews have lived. Rohatyn is in the Galician SIG, managed by Gesher Galicia (see below), but JewishGen’s website includes databases and many general resources applicable to researchers of any region. An outstanding starting point for anyone beginning with Jewish genealogy, and a reliable reference for experienced researchers. Affiliated with the Museum of Jewish Heritage in New York City. Also with an interest page on facebook. Our town is richly represented in JewishGen’s town-focused KehilaLinks page for Rohatyn, which includes a very wide variety of historical, genealogical, and geographical info about the Jewish community of the town.

Gesher Galicia
An international genealogy organization with a primary focus on researching Jewish roots in the former Austrian Empire province of Galicia, but with diverse community records which span all of the ethnic and religious groups which once occupied the region. Includes a historical records database and maps for many towns in former Galicia, including Rohatyn. Several members of the RDRG (above) are directors and/or volunteers of Gesher Galicia. Also with an interest page on facebook.

East European Genealogical Society
A membership organization focused on researching family histories in eastern Europe and stories of emigrant families primarily to North America. Multicultural in its scope, the Society studies Ukrainian, Polish, German, Jewish, and other ethnic and religious groups, with a strong focus on the former Austrian crown land of Galicia, and produces a quarterly research journal with carefully-researched articles.

Miriam Weiner Routes to Roots Foundation
A website with data and guidance on researching Jewish family history throughout Ukraine, Poland, Belarus, Moldova, and Lithuania, by a pioneer of on-the-ground research – especially in the very towns and villages where Jewish families lived.

Jewish Historical Institute, Genealogy Department
Staffed by skilled historians and genealogists, the Genealogy Department of the Jewish Historical Institute (JHI, or ŻIH) in Warsaw provides tailored family history research on an individual basis. Researchers access records in city and state archives of Poland (with pre-war Polish lands, e.g. including western Ukraine), as well as the deep resources of the Institute’s own archives.

FamilySearch
A non-profit genealogy organization majority funded by the Church of Jesus Christ of Latter-Day Saints, providing free access to a large database of family history records digitized and indexed by the Church and by government archives and other non-profit organizations. The website provides access to the largest collection of family-related historical records in the world, as well as a reference library and wiki, including an online guide to Jewish genealogy research and an outline of Ukrainian genealogy records online.

Homestead Hebrews
A Jewish community history and heritage website with multiple applications to our own work, despite geographic and topical distance from our projects in western Ukraine. Focused on the town of Homestead, Pennsylvania and its past Jewish community, the site presents remarkable data and tools with a unique “usable history” perspective. Developed by Tammy Hepps, a friend and colleague with commanding technical skills and ingenuity, the site and its spin-offs blend genealogy and history with archival research and databasing to produce a full history of the community which can be analyzed through a two-way exchange between stories and data. And, she freely shares the tools and information with which to do that analysis.

Centropa
A Jewish historical institute focused on preserving the stories in 20th-century Jewish family histories from Central and Eastern Europe and the Balkans. Centropa is currently developing its presence in Ukraine; their methods, exhibitions, and teaching materials are an excellent model for our efforts in Rohatyn, and their motto “preserving Jewish memory – bringing history to life” fits our goals well.

Pra.in.ua Project
A new and growing database of indexed Ukrainian archives data covering Ukrainian residents between 1650 and 1920CE. Free access to data on more than three million people to date (2018), with ongoing data acquisition. The list of data types is quite varied, providing access to records which might not normally be considered in family history research.

Ackman & Ziff Family Genealogy Institute
A partner organization to the Center for Jewish History in New York, the Institute provides training and advice in family history research, using the archives of the CJH and many other resources. Advice and information can be provided to remote researchers via email and chat. The Institute also produces a series of online genealogy research guides, including a getting-started guide and a focused guide on family history research for Ukraine.

Ukraine Center for Genealogical Research
A program organized by the State Archival Service of Ukraine to manage and assist genealogists wishing to research their family histories using archival records. Provides advice on performing research, an email address specifically for genealogy questions, a fee-based research service, and a web page.

A large number of commercial databases now exist to help family history researchers find records and connect to people and places, for a subscription fee; these can be found easily through internet searches.

Also, in addition to the handful of focused genealogy organizations listed above, a large number of regional genealogy membership groups exist, especially centered in significant diaspora areas such as North America. Many of those organizations, despite their origins in specific world regions, now function primarily on the web and thus can serve researchers at a distance (including in western Ukraine). Dozens of genealogy-based discussion groups – some general and some specific to towns or regions – exist on Facebook, as well.