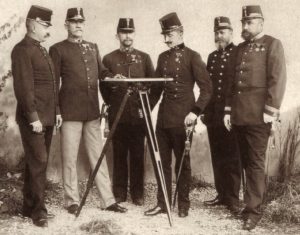 Surveyors of the Austrian Empire.

Cadastral maps are created to document land ownership, and to graphically display data about the size, shape, and features of land parcels and buildings. Early in its administration of Galicia, the Austrian Empire undertook an enormous program to survey the entire imperial landscape in detail, and it succeeded so well the maps produced are still useful today, a hundred years after the collapse of the Empire. Developed using systems of plane-table surveying and triangulation advanced by the Cassini family of France, the accuracy and precision of the Austrian measurements and maps is astounding. And they are often beautiful works of art as well.

The maps were developed in a multi-stage process, from a rough initial field sketch and associated survey measurements, through intermediate maps of increasing refinement and revision, to a final-state lithographed map. Cadastral maps were typically produced at 1:2880 scale in their final state, high enough to identify the size and shape of individual buildings in town, though initial and intermediate maps could be at higher or lower scale – or no scale at all (the field sketches were usually very rough and distorted, simply what could be seen by eye while walking or from a high vantage point).

The 1846 cadastral map shown here began as a set of paper sheets in the Central State Historical Archives of Ukraine in Lviv (TsDIAL); there are a total of 21 map sheets plus a cover sheet. This is the only known surviving Austrian cadastral map of Rohatyn, and unfortunately is just a first-stage field sketch with no reliable scale. But the map is very detailed, and the persistence of fixed features in the town (roads, the market square, several churches, etc.) makes it possible to roughly align the individual map sheets to modern town geography, and so create a composite historical map of Rohatyn from 170 years ago.

Sheet 9 of the Rohatyn map in its original state (left) and rectified (right).

In 2009, cooperation between two genealogy organizations, Gesher Galicia (GG) and the Rohatyn District Research Group (RDRG), enabled the camera-acquisition of digital color images of the original paper map sheets from the archives in Lviv. Central town map sheets were collected as part of GG’s Cadastral Map and Landowner Records Project; the remaining sheets of the town periphery and the nearby hamlet of Perenivka were digitized a few months later by Marla and Jay Osborn. After several attempts to sort and align the map sheets to Earth by Dr. Alex Feller and Jay Osborn, eventually they settled on a scheme of cutting and re-fitting small sections of each image to permit the fine adjustments of scale and orientation necessary to convert the rough sketch into a reasonably accurate map. 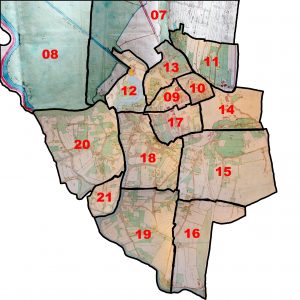 The Galician town of Rohatyn as a jigsaw puzzle.

Each of the individual map sheets was then assembled into a composite which covers the entire town (minus a part of the northern periphery and Perenivka). This work took over 100 hours, primarily because of the distortion in the original sketch geometry; the resulting interactive composite map was donated as the first entry in Gesher Galicia’s online Map Room, which now makes more than 100 Galician cadastral maps available for free use (most of which were much easier to assemble, from more accurate original paper maps). 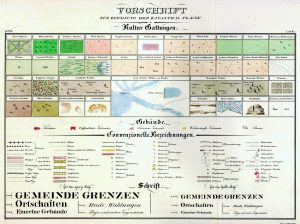 Even as an initial sketch, the map uses symbols standardized by the surveyors for cadastral maps across the Empire. Red-colored buildings are made of stone or brick, with significant buildings shown in darker red; yellow buildings are made of “cheaper materials”, typically wood. Churches are indicated by crosses, and, not a part of the official legend standard, synagogues are indicated by stars. The large Catholic cemetery is indicated by a field of crosses, and Rohatyn’s large old Jewish cemetery is indicated by triangles, following the legend standard. Waterways are shown in blue with arrows to indicate the direction of flow, and a large mill complex at the northwest edge of the settlement is shown schematically by sketched mill waterwheels. Color is used to indicate other land uses as well, including tilled agricultural fields, both private and community grazing parcels, and common roads.

Numbers on the map correspond to register entries for property ownership; we are lucky that some of those registers have survived from 1846 and other years of the Empire. Together with the high-scale map, the registers allow us to identify who lived where in town, and who owned what land parcels in and around the urban center.

The composite map is the image presented here in an overlay on Bing Maps satellite data from the contemporary town. Click on the image below to launch the map in a separate browser window. The image is interactive: pan and zoom are available with ordinary mouse controls or gestures, depending on the device, and zoom is also available by the +/- buttons in the upper left of the display. The map can be made transparent in 10 steps by sliding the control in the upper right of the image. 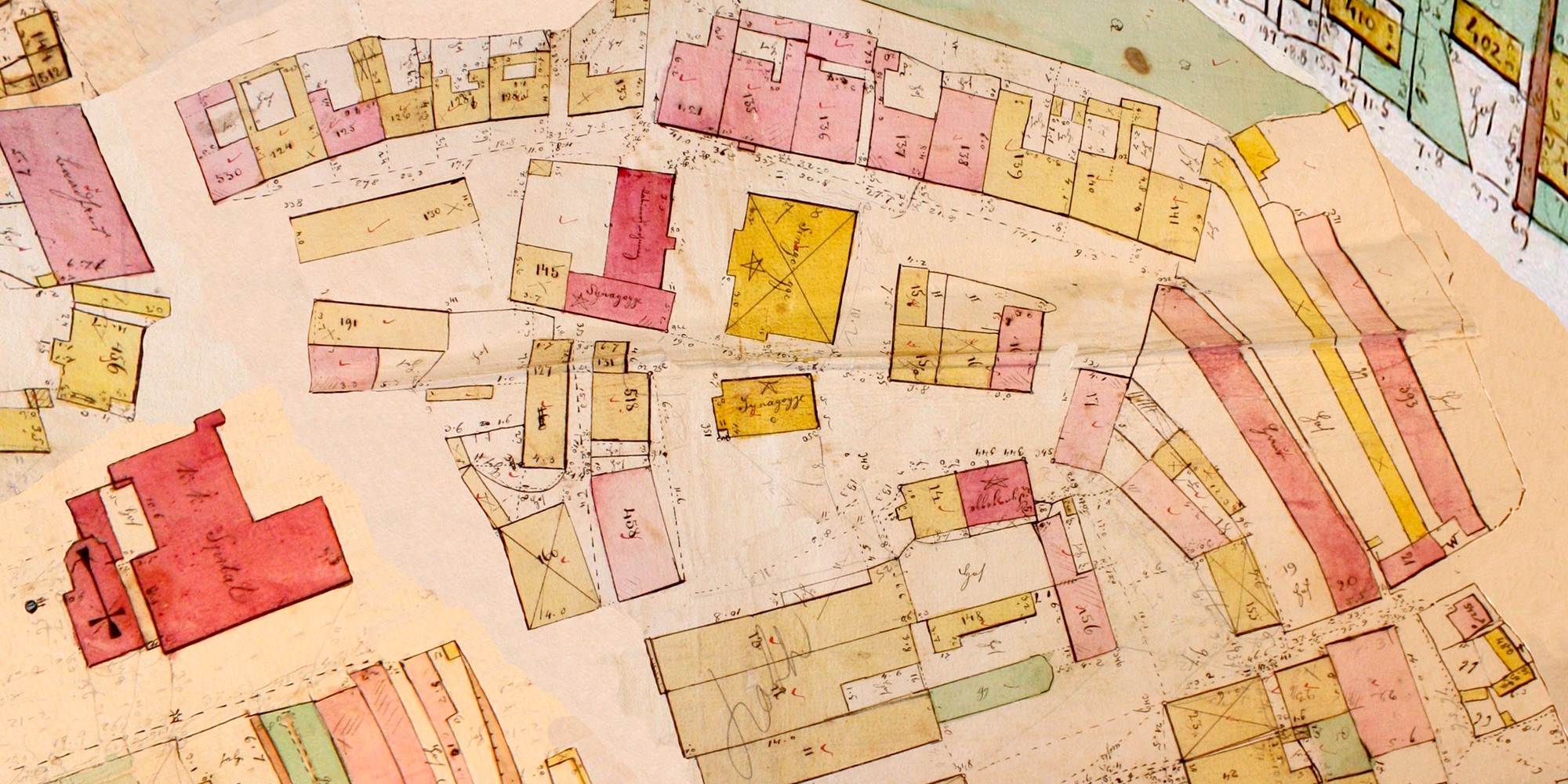 This 1846 cadastral map is one of a series of historical map overlays included in the project Mapping Rohatyn: Geography as a History Resource.