A Junkers Ju 88A, one of several planes used by the Luftwaffe for aerial reconnaissance. Source: Wikimedia Commons.

Aerial reconnaissance was an important if imperfect facet of World War II technology, and all countries with an air force presence in Europe engaged in some form of photographic mapping from the skies. Much has been written about British and American equipment, strategy, and achievements in advance of and during major events of the war, but Germany began the war with a significant advantage in optics and camera capability. The German war machine documented Russian-held lands of Poland and Ukraine ahead of Operation Barbarossa in 1941, and its own occupied territories in the same lands before retreating in 1944; by then, the Luftwaffe’s imaging quality had become very precise. 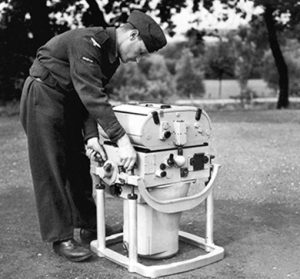 A captured German Rb 50/30 camera in possession of the RAF. Source: NCAP.

All of the Allied powers were aware of the German advances in aerial photography, and at the war’s end the British, American, and Soviet military information units searched for German photograph archives. Within weeks of Germany’s surrender, British and American units had found caches of photographs hidden in several locations in Germany, including a large collection at Hitler’s Kehlsteinhaus mountain retreat above Berchtesgaden in Bavaria.

The photographs were crated and flown to the UK in June 1945, where a joint UK-US sorting and documentation effort (called “Operation Dick Tracy”) on the huge inventory lasted until 1949. All of the aerial photographs were categorized ‘GX’, a label which persists on duplicate copies of the images now held by both the US National Archives and Records Administration (NARA) and the UK National Collection of Aerial Photography (NCAP). All of the WWII images have been declassified, but most remain in the archives in film or paper form, accessible by request but not yet online. At NARA, the collection of more than 1.2 million images is identified by archive number 306065, labeled German Flown Aerial Photography, 1939~1945, and forms part of Records Group 373 of the Defense Intelligence Agency. NARA describes the collection:

This series consists of captured German 12 x 12 inch aerial photographic contact prints covering England, Norway, Poland, Russia, the Middle East and North Africa during World War II. Many of the photographs were taken of battles in progress. Included are both vertical mapping photography and oblique reconnaissance photography. Scales vary greatly from 1:15,000 to 1:40,000.

In 2009, Dr. Alex Feller sent a request to NARA on behalf of the Rohatyn District Research Group (RDRG) for any information about German wartime aerial photos of Rohatyn, and by December of the same year he had acquired scans of two 30cm (12 inch) square prints through contractors working with NARA’s Special Media Archives Services Division (NWCS). They were exposures 4 and 5 of image series GX-1404, taken by the German Luftwaffe over Rohatyn on 27 June 1944, and originally printed at a scale of 1:12,700. Exposure 5 was well-centered over Rohatyn, and is the image presented here in an overlay on Bing Maps satellite data from the contemporary town.

The image is interactive: pan and zoom are available with ordinary mouse controls or gestures, depending on the device, and zoom is also available by the +/- buttons in the upper left of the display. The map can be made transparent in 10 steps by sliding the control in the upper right of the image. It is quite fascinating to zoom to a known feature of Rohatyn using either the 1944 image or the contemporary satellite image, then slide the transparency control left and right to compare the appearance of the wartime town to today. 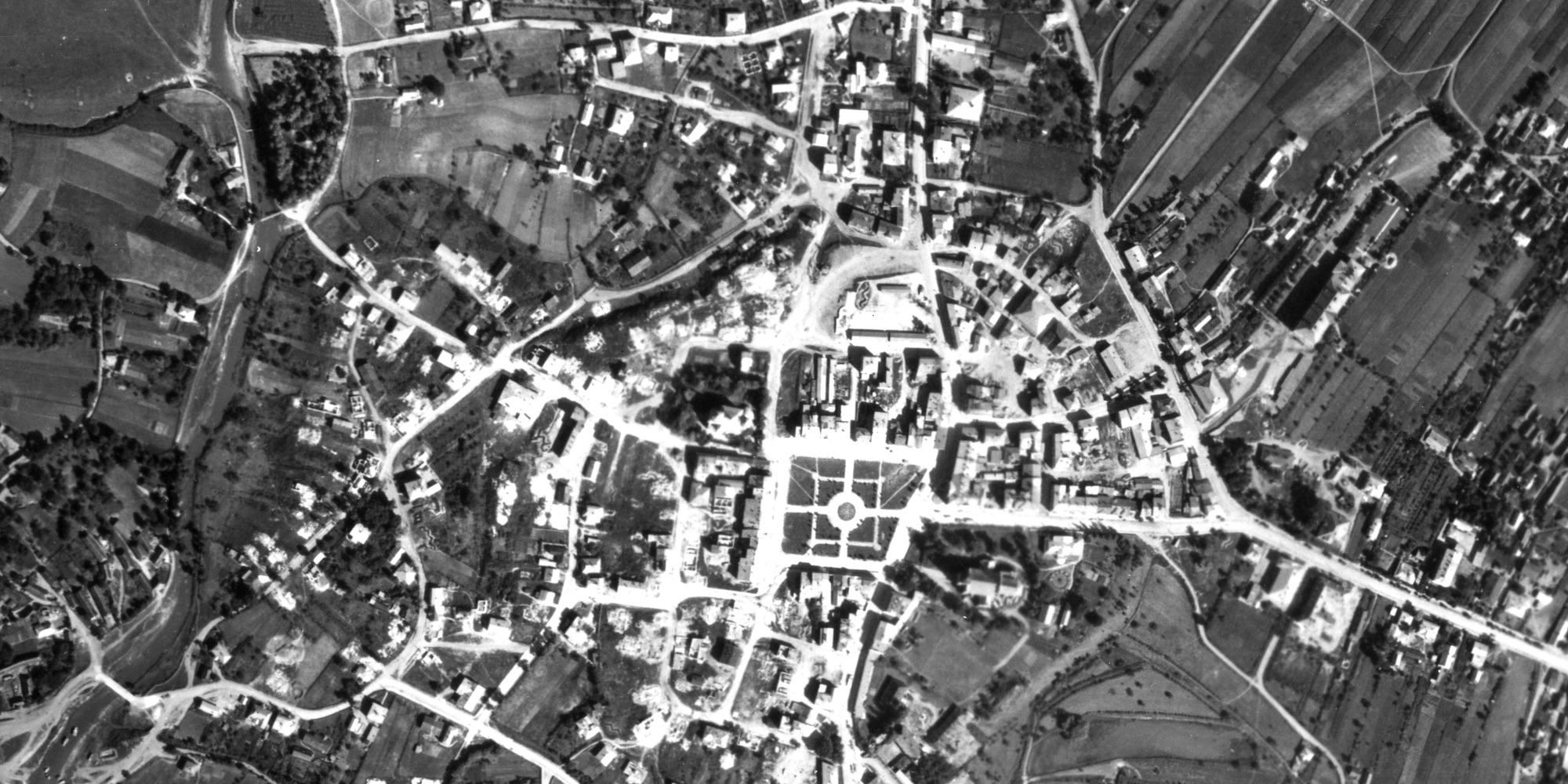 The date of the photograph explains the condition of the town. By 1944, the Jewish community of Rohatyn had been completely destroyed, but some of its built cultural heritage still survived. We invite anyone to study the image and compare to the modern town, but a few features of the town in 1944 are noted here:

This 1944 aerial photo is one of a series of historical map overlays included in the project Mapping Rohatyn: Geography as a History Resource.