I remember that the weather during the summer of 1939 was the nicest we ever had. There were many Jewish people from nearby big towns vacationing in Rohatyn. The markets were filled with an abundance of fruits and vegetables. People were preoccupied with the political situation at that time: Hitler demanded Lebensraum (room to live) and the first land that he wanted was the “Polish Corridor” (the narrow strip of land between Germany and Prussia) and the free city of Danzig which was at that time an international port (today this city, Gdańsk, belongs to Poland).

Our hopes to emigrate to the United States were fading with each day. We were depressed reading the newspapers; Hitler claimed that the Jews were responsible for the deplorable economic situation in Germany. When Czechoslovakia and Austria were invaded by the Germans (1938)[27] we knew that Hitler’s threats had to be taken seriously. Some of the wealthy Jewish people were thinking of escaping to Palestine, but by then the roads to Palestine were closed and it was impossible to obtain a passport.[28] Unrest grew from day to day. The Poles were very hopeful; they believed that the Polish army was strong and would defeat Hitler. The Ukrainians were expecting the Germans with great joy; they believed that the Germans would defeat Poland which would result in the formation of an independent Ukrainian government. In the meantime, the whole town was in a panic; we did not know what to expect. In the middle of September 1939, the situation in town became critical; there was anarchy. The Polish government officials and the Polish army ran away. The neighboring peasants, realizing this, began to massively flow into the town. 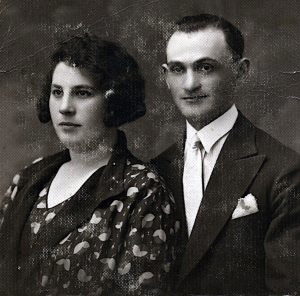 An undated portrait of Jack’s aunt Esther and uncle Isidore Glotzer, who shared a house in Rohatyn with Jack’s family. Jack worked in their butcher shop before the German occupation.

Then suddenly something unexpected happened. On September 17, 1939, instead of the German army, the town was occupied by the Soviet army (Red Army).[29] Apparently, most of the people were not aware of the German-Soviet pact whereby Poland was to be divided; the Soviets were to occupy the eastern part of Poland and the Germans were to occupy the western part of Poland. Thus, Rohatyn found itself under Soviet occupation. The Jews believed that they were saved (from German destruction). The Poles looked at the Red Army as invaders; they would have preferred the Germans (they believed that they could defeat the Germans). The Ukrainians were devastated; their hope for an independent Ukrainian government was shattered. The Ukrainian property owners escaped to Lwów; they were afraid of the Russians.[30] Their property was confiscated. The property of the Jewish merchants was also confiscated except for the merchants who were in the food business; they had to stay in their stores to supply food for the Red Army. 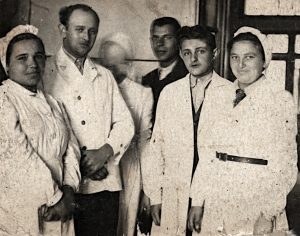 Samuel Glotzer (second from right) at work as a waiter in a Rohatyn bar and restaurant ca. 1939.

I finished my elementary education (seven classes)[31] before the Red Army marched into Rohatyn. My younger brother Samuel worked in a bar as a waiter. My youngest brother Moshe Emanuel went to school. It was very difficult to get a job. I helped my uncle (my father’s brother, Isidore) in his butcher store. He helped us financially and supplied us with meat. It was extremely hard for my mother; she was a very proud person and now she had to depend on the family to support her and her children. I remember she was in tears very often. I learned how to do some electrical work, but I did not get paid for it. However, in retrospect the work with electrical equipment helped me a great deal during the German occupation.

A postcard from Samuel (Miko) Glotzer in Soviet­occupied Rohatyn to his father in America, 11 March 1940.

First, we were happy that the Red Army had occupied our town instead of the Germans; but later we were very disillusioned with the Soviet system. I do not remember being hungry because as I mentioned before, the relatives helped us. We were receiving postcards from our father, but we gave up all hope of emigrating to the United States. The antisemitism decreased during the Russian occupation of Rohatyn; the antisemites were themselves oppressed by the Russians. The Russians decided to demolish some empty stores at the rynek and build a park there with statues of Stalin and Lenin. They took all the young men to dig for this park. I had to work there twice a week without any pay. My hands were full of blisters and calluses. When I came home after this work, I noticed that my mother was looking at my hands; she was crying.

I remember one big event in town during the Russian occupation. The family Grad were very prominent citizens of our town. They owned a very successful textile business. They were very charitable to Jewish and other organizations. When the Russians occupied our town, they confiscated all merchandise from the wealthy businesspeople. Somebody reported to the Russian authority that the Grads were hiding merchandise in their home. The Grads were arrested, and a very lengthy public trial took place. The public attended the court proceedings every day. This trial was a big sensation in the town. In the end, the Grads were found guilty, and they were deported to Siberia. The irony of life is that they survived the war because of this event.[32]

During the Russian occupation the Jewish population in Rohatyn almost doubled. A large number of Jewish refugees from German-occupied towns settled in Rohatyn. We felt sorry for them because they lived in total poverty; we were, after all, living in our homes.

[27] Austria was annexed by Germany in March 1938 in a forced union called the Anschluss (German for “connection”). In autumn of 1938, a significant portion of Czechoslovakia was annexed by the Third Reich under the terms of the Munich Agreement; in March 1939, the German military invaded and occupied the remainder of the country. – Ed. [28] The British government, without consulting the Jewish community of Palestine, issued a White Paper of official policy in May 1939, which significantly limited Jewish emigration from European countries to Palestine. – Ed. [29] The terms “Soviet Army,” “Red Army,” and “Russian Army” are used interchangeably in this memoir. [30] The terms “Soviets” and “Russians” are used interchangeably in this memoir. [31] A class in Poland was a one-year course of study in elementary school. [32] During the Soviet occupation of Eastern Galicia (1939-1941), tens of thousands of Poles, Jews, and Ukrainians were deported to Soviet camps in Siberia. Many people died en route, and a significant number of deportees, unable to withstand the hard work in the camps and the abuse of the NKVD, also perished. Those who survived remember their time in communist camps with horror and pain. Obviously, Jewish families who were deported by the Soviet regime and managed to survive in the conditions of the Soviet Gulag camps remember that this was in a way their salvation, because the Nazis left the Jews no chance for life. – Ed.