When they saw me, they cried from joy. I told them that I still heard shots and that we had to stay hidden. I was very relieved that at least I was not alone. Their apartment consisted of one room; the bed took almost the whole space in the room. There was hardly any room for me. I saw a closet (my favorite hiding place). Since they were so poor, there was not too much stuff in that closet. I went into that closet. I was tired and scared but I dozed off. I stayed in that closet until dawn. Then we heard voices outside. 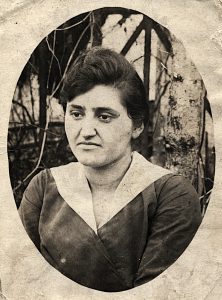 Jewish policemen knocked at each door. They told everybody that the Aktion was over and that the Gestapo had left the ghetto. I was very anxious to go home. I did not know whether my family was alive. On the way to my house I saw dead people all around. First I looked at their faces and I recognized the people I knew. As I was coming closer to my house, I stopped looking at the dead faces for fear that I might see somebody from my family. As I came closer to my house, my mother and my brothers ran out of the house with joy and tears in their eyes; they were sure that I had been killed.

When the Germans came to our town, my mother had an idea to move a big closet to an opening leading to a big attic. She indicated that since we did not have a male adult, we could hide in the attic. She told us that during the pogroms when the Kozaks (the Russian band) had come to rape the women, this had been their hiding place. So this was the place where my mother, my brothers and all our relatives (who lived in this house) were hiding on March 20, 1942. I was sorry that in the morning of March 20, 1942 I had left my house. But in retrospect, this day gave me experience for what was in store for me in the coming months. I learned a lesson of survival – which was to take chances in order to survive. I also learned to look at blood and dead people without being afraid. 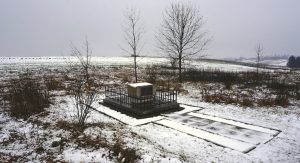 The mass grave site south of Rohatyn where Jack worked to bury the dead, seen exactly 75 years after the killings. Photo © 2017 Jay Osborn.

On March 21, 1942, the Judenrat received an order to recruit about ten young people (I was among them) to go to the outskirts of the town (the area where the Germans had previously brought in equipment and dug ditches, as I mentioned before). Some older people came along to observe and to help out. This place was about 4 km (2-1/2 miles) from our town. The Germans gave us shovels and told us that we were going to bury the people who were taken to this place alive and were shot there on March 20, 1942. On the way to this place (where the ditches were) we had to gather the dead people who were shot in the ghetto (on March 20, 1942) and put them on sleds driven by horses. It was a very cold day. We saw frozen bodies scattered all around. Some old people could not walk, so they had shot them. We had to gather them on sleds and bring them to the ditches. When we finally came to the area where the ditches were, we could not believe our eyes at what we saw. First, we started to vomit and we blacked out. There were about 3,000 people dead, frozen one to another. In order to bury them, we had to separate them. Children were holding on to their mothers; their fingers were frozen and we were unable to separate them. We had to throw them into the ditches (there were two ditches). We kept burying them. The soil was frozen. Hands, arms and legs were protruding from under the soil. It was impossible to cover them completely. Most of them had open eyes. I recognized some of them. Fortunately there was nobody from my immediate family. We had to take breaks. It was impossible to do it continuously. It was very cold but I did not feel it. We were numb. We worked for a few hours. After this experience I was never the same. A Jewish policeman came with us. He told us that it was enough for one day. For the next two weeks we had to go back there. As the soil started to thaw, the bodies started to rise to the top of the ditches. We had to cover them over and over. As the time progressed, we became completely numb; we did not have any feelings.

The ghetto became almost empty after March 20, 1942. Over 3,000 Jews were murdered. Some 100-110 families survived. Everybody was walking around like zombies. It seemed as if everybody was in mourning. The Germans started to bring into the ghetto Jewish people from surrounding towns and villages (Bursztyn, Bołszowce, Bukaczowce and others). Everybody lived in fear. The survivors were trying to build hiding places.

Now we realized what the Germans were capable of doing (incidentally the head of Gestapo in Stanisławów, responsible for the massacre of Jewish people in Rohatyn ghetto, was a murderer by the name of Krüger). Everyday there were rumors that the Gestapo would return. At night we took turns to be on the look-out. In order for others to sleep, one person was always on guard. Luckily, in our house we were all alive after the 20th of March 1942 Aktion.

After the March 20, 1942 Aktion, life was not the same. We lived in constant fear. Everybody was trying to build hiding places. When a truck passed by the ghetto, we ran into hiding places. Even the children, when playing, were trained to stay close to the hiding places.

I was assigned by the Judenrat to do some electrical work in the police station (this building belonged once to a lawyer by the name of Zlatkes). Each time, when I did not do a good job (I was not a professional electrician), the Germans beat and kicked me. But in spite of this, I was glad to be there. The workers in the kitchen in this building, where I used to go to, took pity on me; they gave me some bread and other food which I took home for my family.

[12] Expulsion or annihilation of Jews in ghettos or other concentration points by Germans. [Aktion is a German-language word retained in other languages for this specific usage. The Polish-language equivalent is akcja. -Ed.]. [13] [Jewish and other survivors of the German occupation of Rohatyn usually refer to the Nazi paramilitary death squads (Einsatzgruppen) which led the aktions as “Gestapo”. However, overlapping responsibilities and a shortage of staff within the German security services in Distrikt Galizien, especially in the Stanisławów area, meant that mixed groups of armed men from the Gestapo, SD, Orpo, Kripo, Waffen-SS, and/or local auxiliary police probably took part in the Rohatyn aktions. -Ed.] . [14] A mother and three children.