Hiding Out Again in the Woods of Łopuszna, Autumn and Winter 1943 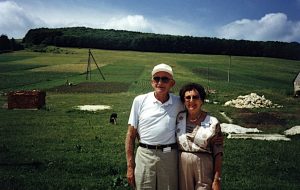 After hiding in the woods of Podwysokie, we found out that a family by the name of Wohl was still hiding in the woods of Łopuszna; so, we figured that if they were still there, it must be safe to go back there. The woods of Łopuszna were dense; so, we would be much safer there. We came back to the same place where the massacre took place before. We did not see any corpses. We found out that the people who were killed there were buried in the woods after the killings. We lived in fear, but we were more cautious than before. At night we went to the fields for potatoes. We caught some rabbits; they provided very good nourishment.

Sometime in August 1943 in the morning I woke up in my hiding spot. All of a sudden, I felt that something was touching my foot. I opened my eyes and I saw a rifle near my foot. I looked up and I saw a German soldier. I was silently saying a prayer. I heard people saying this prayer before they were shot. If I remember correctly, it was “Shma Yisrael” (Hear, O Israel).[61] All of a sudden, the German soldier said to us: “Do not be afraid of me (Hab keine Angst), I am the same as you.” First, I thought that he was a Jew in a German uniform. When I came out from my hiding spot, I started to talk to him. I realized that he was indeed a German soldier. He told us that he and some other German soldiers deserted the German army near Kiev. They all went in different directions. He found out that Jews were hiding in the woods, so he decided to go to the woods to hide with them. His name was Carl. He said that Hitler was a madman; he could never win the war. So, Carl wanted to stay with us; we let him. We felt safe with him because there was a rifle present. In the meantime, Carl fell in love with a Jewish girl who was hiding with us. Her name was Sunia.[62] Her family came to Rohatyn during the Soviet occupation. The members of her family were strictly orthodox Jews. Her father and grandfather were rabbis; her mother wore a wig. Sunia was a beautiful girl.

We found out that the Germans spotted Carl and Sunia. The Germans opened fire. Carl kept shooting back (he took his rifle with him). Sunia was shot first. The farmers told us (at a later date) that Carl was very brave. He shot and killed many German soldiers. When he was wounded, Sunia was barely alive. Carl shot Sunia and then shot himself.

Sunia and her family used to live in the Rohatyn ghetto, in the house next to my cousins, Lusia and Rózia Glotzer. I used to see Sunia and her family in the ghetto. She was not allowed to look at a boy; this is how orthodox they were. The German soldier Carl was very handsome and highly educated. Sunia knew that her parents were not alive anymore. She viewed Carl as her protector; she fell deeply in love with him and died with him.

As I predicted, the Germans did not come to the woods of Łopuszna. Everything was covered in deep snow. On one side, the falling snow was an advantage to us; when we went down to the village for food, our footprints were immediately covered with falling snow. Surviving was very hard; we did not have warm clothing. My cousin Josie Altman and I shared one pair of shoes. When I went for food, he stayed behind. We took turns wearing the shoes. There was a man hiding with us; his name was Greenberg. He had a wife. Since he had shoes, he used to go with me to the village for food.

[61] The first words of a Jewish confession of faith proclaiming the absolute unity of God. Recited at daily prayers and before death. [62] Sunia’s surname is unknown. Her first name may be a diminutive of Shoshana or Zuzanna. – Ed.