We were in Brzeżany for about two weeks. When we heard that Lwów was liberated, we knew that Rohatyn was also under Soviet occupation.[68] We decided to go back to Rohatyn. We still had to be very careful since the Banderowce were active in their killings. 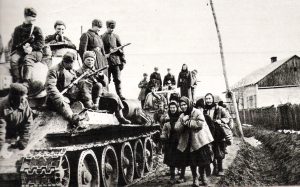 Soviet army troops in a Ukrainian village on the eastern front in 1944. Source: Wikimedia.

Luckily the Soviet soldiers permitted us to follow them. Once in a while they even gave us a ride along their way in their trucks. They dropped us off in the outskirts of Rohatyn which was called Babińce. We walked to Rohatyn and the first thing I noticed was a man walking with a cane and holding on to the fences. When I took a closer look, I recognized him. He was a very good friend of mine; his name was Bernard Kessler. I was shocked to see him in this condition. He looked at us; he was surprised how well we looked compared to him. His first words were “What kind of resort are you coming from?” At that time, we looked much better than we had looked at the time when we first came out of the woods. We were fed by the Polish people, and also the Soviet soldiers in Brzeżany had more food than the soldiers in Łopuszna. Our complexion was very good because we were mostly outdoors.

My first question to Bernard was whether he knew anything about my brother Samuel. He knew. First, he hesitated to tell me. From his expression and the tears in his eyes, I knew what he would tell me. Finally, he took my hands in his hands and told me that my brother was killed two weeks prior to the liberation. All my hopes were gone. I then realized that I was the only surviving sibling. First, I was sorry that I survived, but then a thought came to my mind that I still had a father in the USA. Hopefully someday I would join him. When Bernard looked at my face, he wanted to cheer me up somehow. He told me with joy that he had been hiding together with my cousins Lusia and Rózia and their father Shiye Glotzer. He told me that they were alive and where they were presently living. I hugged him and we both cried. Bernard left but he promised to be in touch with us.

I went to the place where Bernard told me that I would find my cousins and their father. They were in a house previously owned by a man named Amarant. There were more people in that house who also survived in Rohatyn. When I walked in, it took me a long time to recognize my cousins and their father. My cousins were very pretty girls before the war. Now they were skin and bones; their father looked terrible. This reunion was very hard to describe. We did not know whether to laugh or to cry. After we calmed down, they told me that they were with 11 people hiding in a basement of a government building in Rohatyn. German soldiers were upstairs. The janitor of this building supplied them with food. First, I thought how good-hearted this janitor was. Then I found out from other people who were in that hiding place, of his “good” will to save Jews. He sexually abused the women; they were at his disposal like trapped animals. Every day he threatened them that if they would not perform to his liking, he would send them upstairs to the German soldiers. (My cousins Rózia and Lusia Glotzer never recuperated from their ordeal. They were sick all the time. They emigrated to Canada and became very wealthy, but they constantly carried their experiences with them which affected their health, subsequently in their lives. Lusia died in April 1999 and Rózia has all sorts of ailments.[69])

Shiye Glotzer got very sick when he started to eat food. His stomach shrank from lack of food and when he started to eat, he developed severe diarrhea. He almost died. I took him to the Catholic hospital;[70] I was with him day and night trying to help him to get better. It was “touch and go” but he survived. I took him back to his daughters and we all lived together. My cousins became like my sisters.

When I think back, we were all in shock and we did not discuss what happened. We still could not believe that we were alive; we did not know whether to be glad or not. I was grieving for my brother. I went to the man who was hiding him prior to his killing. The man told me that my brother went looking for food and was killed. I knew that he was lying. There was plenty of food in that house. People told me that before the Germans were about to leave, he betrayed all the Jews hiding there. I went to the Soviet authorities; I told them that he was a traitor. I had to tell them that he killed Russian soldiers. They would not punish him for just betraying Jews. I did succeed; he was deported to Siberia.

My coming back to Rohatyn was a very sad experience. Every corner reminded me of my family. Many times, I felt sorry that I survived. Being together with Lusia, Rózia, and their father brought back memories of our entire family. I had nightmares at night. I was dreaming that I was in the woods and the Germans and Ukrainians were chasing me. When I woke up, I did not know whether I should be happy that I was alive.

When we were in the woods, I imagined our liberation quite differently. Perhaps subconsciously I was hoping that when I came “home to Rohatyn” I would find my family. But this was not the case.

[68] Other accounts date the liberation of Rohatyn by the Soviet Army as July 23 or 24, 1944. – Ed. [69] Lusia (later known as Lucy) married Baruch Friedman and lived in Canada for the rest of her life. Rózia (later known as Rose Osher) passed away in Canada in 2011. – Ed. [70] The former Catholic hospital was part of a now-ruined monastery, located today north of the intersection of vul. Shashkevych and vul. Halytska. – Ed.