USC Shoah Foundation Interviews with Rohatyn Survivors and Others

Two stills from the video interview with the late Avi Blitz in 1996. Images © USC Shoah Foundation.

This page summarizes a remarkable collection of video-recorded survivor and witness interviews with Jewish and other people who lived in and around Rohatyn during World War II, including several who survived in the Rohatyn ghetto and/or in surrounding forests under the German occupation. The variety of experience recorded in these interviews is astonishing, and reflects many of the reasons why individuals and families under duress found themselves in Rohatyn at some point during the war. Many of those interviewed have not otherwise left memoirs in any other form; for the several interviewees who also wrote memoirs of their experiences in Rohatyn, these video interviews provide additional details and perspectives which give further context and support further research. The interviews are available for public viewing, although currently at only a handful of locations worldwide; significantly expanded access is in development now.

About the Interview and Archive Project

In 1994, a year after directing and producing his film Schindler’s List, Steven Spielberg established a non-profit foundation to make audio-visual interviews with survivors and witnesses of the Holocaust as a resource for education and research. Currently the collection includes more than 55,000 interviews, the majority recorded before 2000 and capturing the Jewish experience, but the program scope has expanded to include survivors and witnesses of other genocides, as well as rescuers and aid givers, political prisoners, war crimes trial participants, homosexual survivors, and others. In 2006 the foundation joined in partnership with the University of Southern California and is now named the USC Shoah Foundation Institute for Visual History and Education.

The videos are stored in the foundation’s Visual History Archive (VHA), an online portal for searching and using the recordings. Access is possible through three levels of subscription: all of the interviews are accessible at almost 100 full access sites in 15 countries (the majority in North America and western Europe); smaller selections of interviews are available at more than 200 partial access sites in over 30 countries; and more than 3000 full interviews are available online with free registration at the VHA login page. In 2016, the USC Shoah Foundation contracted with ProQuest to distribute the full archive of videos to educational institutions, and to prepare transcripts of all of the interviews; that work is in progress, but status and an estimate completion date are currently unknown.

In addition to making and archiving video-recorded interviews for research, the USC Shoah Foundation also uses the interviews as an education resource in a variety of curated programs to enhance the teaching and learning of history and related subjects in high schools and higher education.

Interviews with Relevance to Rohatyn During the Holocaust

Searching the VHA collections for “Rohatyn” returns 33 interviews, recorded between 1995 and 2001, in seven languages. Only four of the interviewees were born in Rohatyn; an additional six were born in Bukachivtsi, and another five in other towns in or near the Rohatyn district. The group also includes one Romani Holocaust survivor from Rohatyn, and one local Ukrainian woman whose family aided and rescued one of the Jews who gave testimony in these interviews. Jewish survivors in this diverse group include many who were born at significant distance from Rohatyn but found themselves in the town either because their families fled the Nazi invasion of western Poland in 1939, or because of Soviet passport rules prohibiting Jews from living in larger cities such as Lviv and anywhere near the shifting international borders. 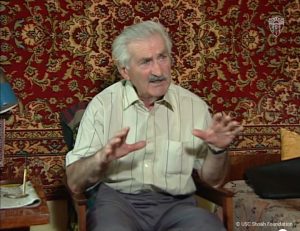 A still from the video interview with the late Boris Arsen in 1997. Image © USC Shoah Foundation.

The large number in this set of Jewish survivors from towns within a 50km radius around Rohatyn reflects the mostly involuntary relocation of area Jews from smaller ghettos to Rohatyn following the 20 March 1942 aktion which destroyed the Rohatyn Jewish community and nearly emptied the ghetto there. Survivors in that group had also experienced ghetto life in Bukachivtsi, Khodoriv, Pidhaitsi, Burshtyn, and Peremyshliany. Several of the interviewees survived in the forests east and south of Rohatyn, as has also been described in written memoirs by other survivors. And some of the interviewees escaped from Rohatyn and other area towns, only to be captured elsewhere and taken to concentration camps in Poland.

Of particular value to Rohatyn researchers are the many details of pre-war Jewish family members, including their names and personalities, and also their experiences during the war. Because these interviews were made before most of the Jewish memoirs were written, much of the information provided during the recordings floods out quite fresh and detailed, and in a few instances more usefully than in the later written versions. Several of the video recordings include family photographs not seen in other collections, in the Rohatyn District Research Group (RDRG), the Rohatyn Yizkor book, or elsewhere. Similar depth of detail is also available in interviews covering survivors’ families in Bukachivtsi, Burshtyn, and other area towns. For many of us who are engaged in the recovery of memory of the Jewish communities of Rohatyn and the region, these videos are a rare opportunity to watch and listen to survivors speaking directly to us from two decades ago about their experiences of the war, reliving with love, fear, laughter, and tears; it is especially moving to watch and hear the testimonies of those who have since passed.

At present only one Rohatyn-related interview is available for viewing outside of a VHA-authorized access point. That interview is VHA# 31757 with Jewish survivor Boris Arsen (author of the memoir My Bitter Truth), in Ukrainian and Russian languages. We hope that expanded access and new transcripts will be made available in the next few years, but in the meantime anyone who can visit a full-access site will be able to study and experience these interviews now.

A table summarizing the Rohatyn-related interviews as of August 2018 is shown below; in addition you can click here to get a pdf of the same table which enables you to copy and paste the data. Some of the cells have been adjusted from the video metadata posted online based on information we heard in the interviews, and place names here reflect the modern spelling of those settlements. 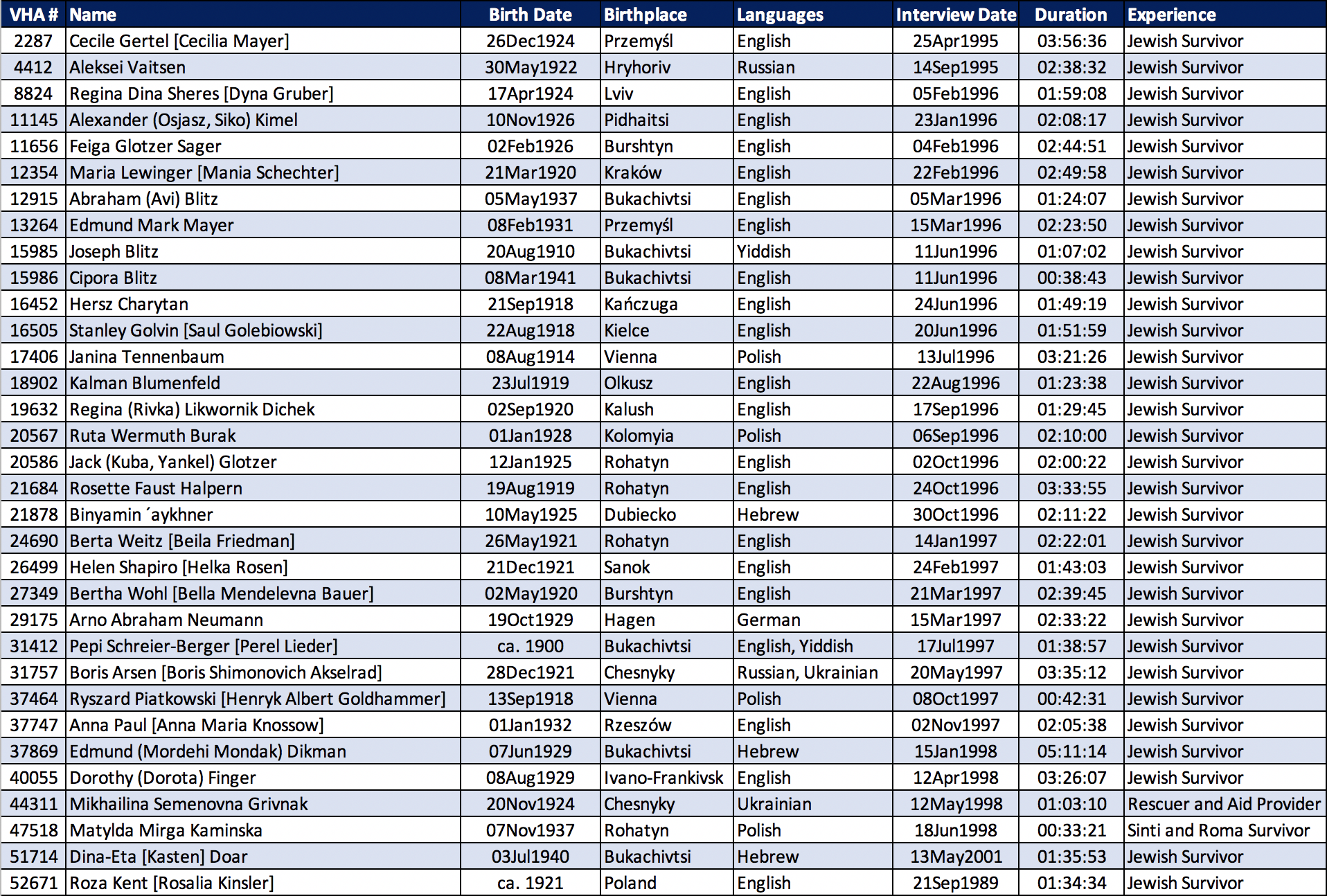 A number of other audio and video survivor and witness interviews with relevance to Rohatyn studies are also available; see the overview page on Rohatyn memoirs for links to specific articles where those recordings can be found.

See also the website of the USC Shoah Foundation for updates and further explanation about the collection, the project, and how to access the interviews for further study.

This page is part of a series on memoirs of Jewish life in Rohatyn, a component of our history of the Jewish community of Rohatyn.