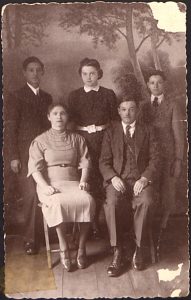 On the eve of Yom Kippur[48] (September 20, 1942) we went to Kol Nidre[49] services which took place in a neighbor’s house (the third house from us). The neighbor’s name was Leib Podhorcer.[50] There was a big kitchen in that house where the services took place. Women were praying in an adjacent room. After the services we went home. The following morning, we went back to the same house for Yom Kippur services. All of a sudden, just as the men were putting on their tallithim,[51] we heard shots. (I and other males of my age did not put on tallithim; in those days a male did not wear a tallith until his wedding day. I do not know whether this was a custom only in our part of Poland.) We looked out of the window. We saw Gestapo men shooting people around them (I noticed a young woman being shot; her name was Rothenberg). The men dropped their tallithim; everybody started to run to their hiding places. Since there were only a few Gestapo men in the ghetto at that time, we managed to get safely to our house. I was with my middle brother Samuel; my mother stayed home with my youngest brother Moshe Emanuel.

When we arrived at home, we moved the closet and went to the attic (our hiding place). Shortly afterwards we heard Gestapo men entering our house. We were very quiet. Unfortunately, my aunt Malkah Altman, being sick with typhus, was moaning loudly. We held a rag to her mouth; we almost choked her.

At night, at about 2:00 a.m., I took my mother, my brothers, and my two cousins and we escaped to the police station. While I was working there previously, I had prepared a very good hiding place in the cellar. I assumed that nobody would look for Jews in a German police station. We stayed in the cellar throughout the night. We were very hungry. Since I was familiar with every corner there, I knew where they stored food. I left the cellar. The Germans did not pay attention to me because they were used to seeing me there. I went to the kitchen and other places, and I got some bread and other food. I brought the food down to my mother, brothers, and cousins. I even dared to take my middle brother Samuel with me so that he could carry some food too, right under the noses of the Germans.

I knew that there was a good view of the ghetto from the attic of this building. I wanted to see what was going on; so, I went to the attic. I found in the attic two men and one man’s wife. They were tailors. They used to come to the police station to sew clothing for the Germans. Their name was Freiwald. They were very good friends of our family. They had the same idea as I had; that they could hide there too. They were considered the best tailors in town. Around 2:00 p.m. we noticed that the Gestapo men were packing to leave the ghetto. All of a sudden, we saw the Gestapo men capturing three men. One of them was a schoolmate of mine by the name Schnaps. The other man’s name was Rothenberg[52] and the third man’s name I do not remember. From the attic window we saw that the three men were ordered to kneel down. As the Gestapo men were taking off their rifles, my friend Schnaps and the other man escaped. The Gestapo men shot Rothenberg and ran after my friend and the other man. They captured the two men, brought them back and shot them. There was a Catholic church in the vicinity;[53] we saw Catholic priests observing this incident and laughing.

The Gestapo men finally left the ghetto. I do not remember whether the Gestapo men came that day from Stanisławów or Tarnopol. At night we went back to our house. The next day we were informed that the people who were caught during the Yom Kippur Aktion were taken to the railroad station and deported to Bełżec death camp.

Fortunately, our family survived in our original hiding place.

[48] The holiest Jewish holiday, the Day of Atonement, observed with fasting and prayers. [49] A holy prayer chanted in the synagogue on the eve of Yom Kippur. [50] This neighbor was also called Moshe-Leib. – Ed. [51] A “tallith” (plural “tallithim” or “tallithot”) is a shawl with fringed corners traditionally worn over the shoulders by Jewish men during prayers. [52] He was a brother of a young woman who was killed before, as I mentioned. [53] This is the historic Roman Catholic Church of St. Mykola (now also called St. Anna), at vul. Halytska 60. – Ed.