After the Yom Kippur Aktion, life went on in fear. Every day there was a rumor that the Gestapo were coming back. Several times during the day we ran to the hiding places. I still continued to work in the police station as an electrician.

In the middle of October 1942, the ghetto area was reduced. We had to move to another house. This house belonged to a family by the name of Schneekraut. This house was not big enough for our entire family; some members of our family moved to a house owned by Dr. Melnik who had two houses located in the ghetto area. 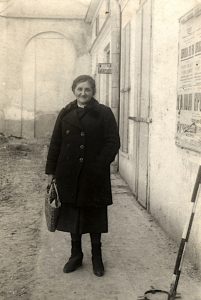 Jack’s mother Toba Barban Glotzer smiling on a sidewalk, probably in Rohatyn in the late 1930s.

I contracted typhus and developed a very high temperature. Most of the time I was unconscious. 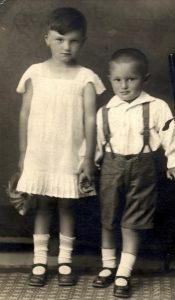 Clara and Izie Altman, probably in Rohatyn,
in 1926.

On the morning of Tuesday, December 8, 1942, Gestapo from Tarnopol entered our ghetto. (The head of the Gestapo in Tarnopol was a murderer by the name of Müller.) The Gestapo closed all exits from the ghetto. Everything happened very fast. My mother and my brothers dragged me to the hiding place in the Schneekraut’s house. There were two hiding places in this house. There was an attic and a cellar. I had helped to dig a hiding place in the cellar. I did not know that an Aktion was in progress; I also did not know that I was being dragged to the attic. The people present in the house decided that the adults should hide in the attic and the young children with their mothers should hide in the cellar (basement). Since young children cannot sit quietly and tend to be noisy, it was thought that it was less likely to hear them from outside when they were in the cellar. My aunt Malkah Altman and her daughter Clara hid in the cellar together with other women and children of our family.

I regained consciousness in the attic; my fever broke. First, I did not know where I was. My lips were dry; I needed water. But when I saw what was happening and when I saw my mother and my two brothers, I kept quiet. All of a sudden, we saw from the cracks in the floor, Gestapo men dragging people out of the cellar. There was a rumor that a Jewish policeman pointed out to the Germans the hiding place in the cellar where mothers and children including members of our family were hiding. The Gestapo took them to the railroad station, put them in cattle cars, and deported them to Bełżec death camp. The Gestapo thought that the cellar was the only place in the house used for hiding, so they did not search the house anymore.

In other houses the hiding places were so crowded that many little children suffocated; there was not enough air in some of these places (bunkers). In one instance a mother attempted to stop her baby from crying when Gestapo men were in the house – as a result the baby suffocated.

At the end of the day, over 1,000 Jews were captured and deported to Bełżec death camp.