The Liquidation of the Rohatyn Ghetto: June 6, 1943

After the December 1942 Aktion, the mood in the ghetto was gloomy. We heard that there were no Jews left in the surrounding towns. We felt that our end was near. In May 1943 we heard that the Gestapo had surrounded the ghetto in Przemyślany (a town approximately 30 km north of Rohatyn) and had slaughtered all Jews in the Przemyślany ghetto. The Jews in the Przemyślany ghetto were less prepared than we were. Therefore, the Gestapo were very successful there and liquidated the ghetto in one day. We thought that after the Przemyślany massacre we would be next. Przemyślany belonged to the oblast (region) of Lwów. We belonged to the oblast of Stanisławów (today Ivano-Frankivsk) which was under a different administration. This was the reason why we were spared for a few weeks. After the Przemyślany massacre we sat in our hiding places day and night. There were many false alarms.

In the morning of June 6, 1943, which fell on the first day of Shavuot,[54] at six o’clock in the morning, our ghetto was surrounded by Gestapo. We heard shots. We knew that our end had come. The liquidation of the Rohatyn ghetto had begun. Somehow, I had always planned that when this time would come, I would take my family and run to the hiding place of Shiye Glotzer (Lusia’s family); but when I started, I knew that we could not make it. The Gestapo were all over the ghetto. I, my mother, my brothers, and a few of my cousins ran back into our hiding place (in the attic of the Schneekraut’s house). This hiding place (I called it a bunker) could not accommodate so many people since there were people from all over the ghetto. Some people came from outside; they were already shot. They were screaming from pain; blood was all over. It was difficult to breathe. There was total chaos.

I knew that if we stayed there, we would die. There was another hiding place in a barn; there was also an attic on top of that barn. I ran up to that attic with my middle brother and my cousin. We wanted to see whether we could hide there. When we went up, there were already people hiding there. There were a lot of people from the surrounding towns. I wanted to bring up my mother and my youngest brother who at that time were in the hiding place in the barn. Unfortunately, the Gestapo were already downstairs, so I could not get to them. I was looking down from the attic to see what was happening. The Gestapo were accompanied by a Ukrainian by the name of Melnik.[55] This Ukrainian spoke fluent Yiddish. He shouted out in Yiddish: “Jews, come out, the Aktion is over”. They all came out including my mother, my youngest brother Moshe Emanuel, and my cousins. They were all shot by the Gestapo, as I watched from the attic. 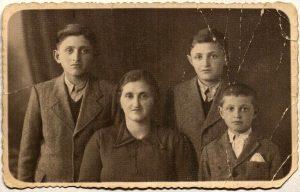 My mother Toba Glotzer was 45 years old, and my brother Moshe Emanuel was 13 years old when they were so brutally murdered by the Germans. My mother was a very loving person; she was a devoted wife and mother who in spite of many problems and difficulties maintained a clean home and always made sure that her sons were well fed and dressed. She was very talented with her hands; she used to make beautiful needlepoints and crotcheted curtains. She came from an aristocratic family; she was truly a remarkable woman, a woman of valor (eishes chayil).[56] I adored my little brother Moshe Emanuel. He was a very bright boy and a very good student in school. We sent some of his report cards to our father in the USA. These report cards are now in the National Holocaust Museum in Washington, D.C. As I mentioned earlier, he used to follow me everywhere, but I did not mind it because I loved him so much. It was very shocking and extremely painful for me when they were murdered in front of my eyes.

My middle brother who was with me questioned me why we were not going to bring over my mother and my brother. He did not see what I saw. When I did not answer, he understood. He became hysterical; I had to quiet him down.

We sat in that attic for the next few days without any food. I could not go down to retrieve the bodies of my mother and my brother because the Gestapo were all over. I noticed when I looked around and as far as I could see there were bodies everywhere. One day when it was raining very hard, we came down from the attic at night and sneaked into a house to find some food. It was quiet. We decided to look whether there were still some people in the ghetto. We walked into a house. The house was full of smoke. The name of the family in this house was Melmen. We started to shout that there was a fire, but the father of that family said that he himself put the house on fire. He said that he and his family would rather burn than be shot by the Gestapo. This house was owned by an egg merchant by the name of Schorr. There was a hiding place in the basement of this house. We went down; I knocked on the door, but nobody answered. The people there did not want the smoke to enter the basement. When I called out my name, they opened the door. My cousin Clara Glotzer (sister of Tonia Czekay) was there. There were other people whom I knew. I remember a girl by the name of Stryjer who was also there. The place started to fill up with smoke.

We knew that we had to get out of this house. At night when it was raining very hard, I took all of them with me to the attic hiding place above the barn.

During the next night we left the ghetto.

[54] Shavuot is the Jewish holiday commemorating the revelation of the Law at Mount Sinai. (June 6 is reported as the first day of this aktion in most memoirs and histories, but the first day of Shavuot in 1943 was Wednesday, June 9. Several other survivors also recalled the action as coinciding with Shavuot, perhaps because it lasted three days. – Ed.) [55] After the war he disappeared and was never found. [56] From the biblical passage in the Book of Proverbs 31:10-31, which is customarily read or sung in some families before the Friday night Shabbat meal. – Ed.