Hiding Out After the Liquidation of the Rohatyn Ghetto: June 1943 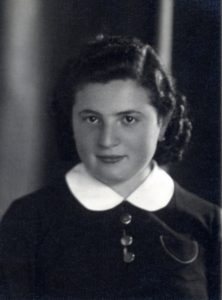 We kept going on to the outskirts of the town avoiding places where we could be seen. We came to the part of Rohatyn which was called Babińce; we then separated. The girl by the name of Stryjer and a doctor with his wife by the name of Kudish went to some gentiles whom they knew. I, my brother, and my two cousins Clara Glotzer and Josie Altman went to a Polak[57] by the name of Sikorski on the suggestion of Clara Glotzer. Clara told us that she was supposed to meet her boyfriend Chaim Blaustein at that Polak’s house. This was prearranged before the liquidation of the ghetto (I did not know about it). Chaim Blaustein never made it there; he was most probably murdered during the liquidation of the ghetto. Clara Glotzer told us that there was a hiding place in Sikorski’s house; so, we headed in that direction. When we came there, Clara was very distraught because Chaim Blaustein was not there. A man by the name of Yankel Auster was there; he was waiting there for his girlfriend. She also did not make it. He presumed that she was also murdered during the ghetto liquidation.

We stayed in Sikorski’s house in a hiding place which he prepared. He gave us some food. After five days he told us that his wife was very scared to keep Jews under her roof since Germans were all around the house. The most that he was willing to keep was three people. So, it was decided that Clara Glotzer, my brother Samuel, and Yankel Auster would remain at Sikorski’s. I told them that I and my cousin Josie would be going to look for another hiding place in the woods nearby. When I found a place, I would come for them, or I would send somebody to bring them to me. I remembered the surrounding area; I used to go there with our help to buy cattle. I saw very dense woods. I realized that perhaps these woods would be a good place to hide. I remembered that some of my very good school friends (Ukrainians) lived on the way to the woods. When we came to the house of these friends it was one o’clock at night. We knocked on their door and when they saw us, they started to shout: “Get out of here or we will call the Germans to get you.” And I had considered them my best friends. 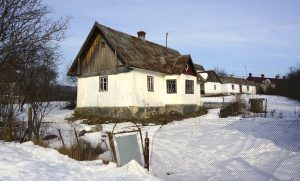 I then realized that nobody would help us; we had to get to the woods. It was dark, but somehow I knew that we were going in the direction of the woods. When we came to the outskirts of the town, we met some people from the ghetto; they also had the same idea to go to the woods. We kept going together. We tried to avoid the centers of the villages. We came to the outskirts of a village called Puków. One young Ukrainian on a bicycle came toward us. We asked him for directions; he put his fingers in his mouth and started to whistle and to scream: “Jews are here.” We started to run in different directions.

All of a sudden, I realized that I was all alone; I could not see anyone from the group. I went around the village Puków and I noticed that I was on the right road leading towards the woods. I was very scared because I was alone. There was a hill; I climbed up. I was very tired, and I fell asleep under a tree. When I woke up it was daylight; I was in the village of Cześniki. I realized that I could be very easily seen from the village since I was on a hill. I started to think in what direction I should go next. All of a sudden as I looked around, I saw my cousin Josie Altman and a young man coming towards me. I was very happy. We had to be very careful since it was daylight. The Germans often used this road; this road led to Russia. 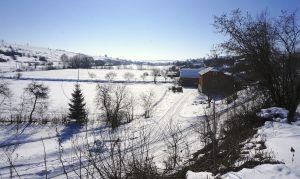 At the edge of the village of Lipica Górna (today Verkhnia Lypytsa), 2018.

We went into the bushes, and we sat there through the daylight. When it started to get dark, we tried to decide where to go next. Since the young man who was with us was from the village Lipica Górna, we decided to go in that direction. When we came to the outskirts of Lipica Górna we were hungry, tired, and scared. We were also very thirsty; we drank water from dirty puddles. I believed that if we waited longer, we would die from hunger. I decided that as long as I had some strength left, I would go down to the village to look for food. I was so weak that I could hardly walk. I approached the first house of the village. A woman was cooking in the kitchen. She was taking out “pałynechi” (a kind of Ukrainian bread) from the oven. There was a pot full of boiled potatoes and beets. I started to eat. The woman did not turn around from the oven. I took a pillowcase from off of her pillow and I filled it with food. She still did not say a word. I took that food to my cousin and the young man. I felt bad that I did not have any money to pay that woman for the food. My cousin and the young man started to eat very fast; I was afraid that they would get sick. Somehow, I had a very good feeling about that woman. I saw in her eyes, when she looked at me, that she was sorry for me and that she would not harm me. The next day I went back to the same house for some more food. When I came in, the kitchen was full of food, as if the woman knew that I would come back. She even handed me another pillowcase so that I could pack some more food. In retrospect, this woman saved three lives. Before I came to her house, the three of us were thinking of surrendering ourselves to the Germans to be shot.

Before I left that woman’s house, she told me that a man by the name of Suchar Hauser,[58] his daughter Dziunia, and his son Lonek were hiding in the village of Lipica Górna. I knew Suchar and his family from the ghetto. They were sent from Lipica Górna where they used to live before the war, to the Rohatyn ghetto. When I came back with the food and I told my cousin and the young man what the woman told me, the young man got all excited and started to scream with joy: “Suchar Hauser is my uncle”. So, we decided, when it got dark, to go to the place where Suchar and his family were hiding. The Germans were all over the village. We were very scared, not only of the Germans but of the Ukrainians as well. We had to crawl most of the way. Fortunately, the woman gave me a detailed description of the place where these people were hiding. They were in a barn hiding under hay and straw. First, when we called them, they did not answer. Then the young man called out: “Uncle Suchar” and told him his name (I do not remember the name of this young man); they looked out from under the hay and told us to come under the hay as well. All of a sudden, the owner of that barn walked in. His name was Dubski. He knew that Suchar and his family were hiding in his barn. But when he saw us, he could not believe that we could make it to his barn. Right away he brought in some food. We could see his kindness; we could feel that he wanted to help us. We felt sorry for him because we put him in a predicament. The Germans were all over the village. He had a big family. I told Suchar about the woman who gave us food and told us where they were hiding; Suchar told us that this woman was of a different religion. She belonged to Jehovah’s Witnesses (in Polish, Sobotnicy).[59] Suchar told us that Dubski was also of the same religious faith as this woman. I feel, even today, that I owe my life to these kind people. They made my survival possible in my darkest hours.

We stayed in Dubski’s barn two weeks. As much as he wanted to help us, he was very afraid. We felt that we were jeopardizing his and his family’s lives. He told us he found out that there were Jewish people from the Rohatyn ghetto hiding out in the woods of the village of Łopuszna. The Hausers stayed behind, but I, my cousin, and the young man (Hauser’s nephew) started to go in the direction of Łopuszna. The Germans were all around. We believed that we could not make it alive to Łopuszna. We noticed a corn field with very tall corn stalks, so we decided to stay in the corn field. At night we went down to the village. We stole some food from the farmers while they were sleeping. We even killed chickens and we made a fire at night to cook the chickens. We sat in the corn field until one day we heard voices and noise coming toward us. We realized that the farmers were coming to cut the corn. Nearby was a very small, wooded area; we ran there to hide. We stayed there a few days. One day we saw a Polish peasant not far from the place where we were. Somehow, we knew that the peasant was not going to betray us. We asked him for the directions to get safely to Łopuszna. He told us how to get there. He also told us that Jewish people were hiding there. It took us the whole night to get to the woods of Łopuszna.

[57] The neutral term “Polak” is used in the Polish language to identify a person of Polish origin or ethnicity; in English the current neutral term is “Pole,” with the earlier English term “Polack” now considered derogatory. – Ed. [58] Suchar Hauser was also called Yissocher Hauser and Issakher Hoiser. – Ed. [59] This note may confuse different Christian Protestant pacifist and conscientious objector groups in the region: Jehovah’s Witnesses (Świadkowie Jehowy in Polish) vs. seventh-day Sabbatarian movements such as Seventh-Day Adventist and Seventh-Day Church of God followers (Kościół Chrześcijan Dnia Sobotniego in Polish, sometimes categorized as sobotnicy in Polish language). It may refer to Subbotniks, Christians who accepted Mosaic Law and the Saturday Sabbath, and had some affinity for Judaism, but we are not aware of Subbotnik presence in eastern Poland. – Ed.