Return to Rohatyn from the Army

I arrived at the railway station in Rohatyn. I did not know whether any of the Jewish people were still in Rohatyn. When I arrived, I did not know in what direction to go. First of all, I was all alone. I was scared, as I knew that the Banderowce were still active in their murders.[73] The railway station was at the outskirts of the town. I approached a Ukrainian and he told me that there was one Jewish family in Rohatyn. Their name was Stryjer (I knew them from before the war). The Ukrainian told me that the Stryjers were staying in the electric powerhouse (elektrownia).[74] I was familiar with the electric powerhouse since I used to work there during the German occupation. Mr. Stryjer’s first name was Mocie; he had a sister. The Stryjers had two sons; one son and Mr. Stryjer were in Russia during the war. Mrs. Stryjer with another son were hiding with Lusia, Rózia and their father Shiye Glotzer. One day the Stryjers’ son went to look for food and he was murdered.[75] When I came to the electric powerhouse, the Stryjers were very happy to see me. They told me that a transport was supposed to come and to take all of us to Poland. (The Soviet Union had annexed to its territory eastern Poland including Rohatyn.) 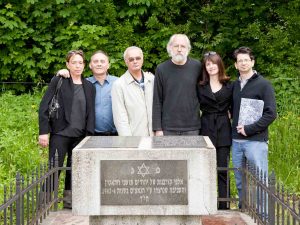 The mass grave site north of Rohatyn, the burial place of Jews murdered in numerous killing events during the occupation, including a massacre over three days during the ghetto liquidation in summer 1943. Jack Glotzer’s son Mitchell is shown second from left, in 2011. Photo by Mitchell Glotzer.
The plaque reads:
Here lie thousands of Jews, citizens of Rohatyn and its surrounding areas, who were brutally killed by the German Nazis during the years of 1942–1944 –
God rest their souls

In the meantime, I was trying to sell our family’s house, as I did not have any money. It was very difficult to sell the house even though I had people who were interested in buying it. Fortunately, since I was in the Russian army, I had some “clout” and I managed to sell our house. I was happy as I had some money. I met a man who worked in a flour mill; he gave me flour which I took to Lwów. I sold it and split the profits with him. I made quite a bit of more money.

Before the transport was supposed to come for us, we went to the two mass graves where about 17,500 Jews were buried.[76] The first mass grave was for people who were murdered on the 20th of March 1942. As I wrote previously, I was forced to bury the people. The second mass grave was for the people who were buried there after June 6, 1943, at the liquidation of the ghetto.[77] My mother and my brother Moshe Emanuel were buried there. My brother Samuel who was murdered two weeks prior to the liberation, was probably in that grave as well: all murdered Jews were gathered and thrown into this grave. The Ukrainians pointed out that mass grave to us since we were not present in town at that time. (I had escaped to the woods and the Stryjers were in hiding.) The grave was so huge, we could not believe our eyes. It was a very traumatic experience that I shall never forget. The three of us sat on the ground crying and reciting Kaddish over and over again.

Then we went to the other mass grave where I buried the people on March 21, 22 and 23, 1942. I was sitting there alone as the Stryjers were wandering around the grave. I also kept reciting Kaddish there over and over again. Before my eyes I saw a vision of what I had witnessed on those cold March days of 1942. With heavy hearts we went back to the electric powerhouse. We started to get ready for our departure.

[73] At the same time, some “Banderites” were also brutally killed. In the period from 1944 to 1953, secret punitive units of the Soviet NKVD carried out military operations, raids, and encirclement on the territory of Western Ukraine against units of the UPA, which opposed Soviet occupation on Ukrainian lands after more than three years of bloody Nazi occupation. – Ed. [74] This Rohatyn district electrical network station is still at the same location, at vul. Uhryn-Bezhrishnyi 2. – Ed. [75] The Stryjer (also called Streier) boy caught and murdered while foraging for food was called Yosef, Yossi, Josef, and Juzio. – Ed. [76] It has not been possible to accurately estimate the total number of dead buried at the two Jewish mass graves in Rohatyn. At the south mass grave, where victims of the March 20, 1942 killings were buried, Jack (who was an eyewitness at the grave site) estimates “about 3,000” and “over 3,000” which agrees well with calculations made by Moshe Nas’hofer, a Jew who worked in a prewar administration and had census data. Nas’hofer gave testimony to Soviet authorities in early 1945 with a figure of “between 3,000 and 4,000;” the Jewish monument at the south site estimates that the grave holds “3,500 Jews.” Far less is known about the north mass graves, where victims of the June 6, 1943 ghetto liquidation and at least some of the other killings in Rohatyn during the German occupation years were buried; there were no surviving Jewish witnesses of the shootings at this site, and the Jewish monument there only describes “thousands of Jews.” Much of the uncertainty comes from a lack of data for the number of Jews who fled the German invasion of Poland to Soviet-occupied Rohatyn between 1939 to 1941 (and how many of those were subsequently ejected), as well as the numbers brought to the Rohatyn ghetto from other area ghettos after the first aktion, the numbers rounded up in several aktions and deported to their deaths at Bełżec, and the number who died of disease and other causes in the ghetto and then were buried in one of the two Jewish cemeteries. Based on limited and conflicting sources now available, Jack’s figure of “about 14,000” buried at the north site (inferred from his total in Rohatyn and the prior estimate for the south site) is very likely an overestimate. Our current estimate of the dead buried there is about 4,000 and possibly as high as 8,000. – Ed. [77] Victims of the Rohatyn ghetto liquidation and other killings during the occupation were buried in pits at a clay quarry and brick factory north of the town center; today the graves and their memorial monuments are located at the rear of the Rohatyn “vodokanal” facility, behind vul. Halytska 102. – Ed. [78] A Jewish prayer recited in the daily ritual of the synagogue and by mourners at public services after the death of a close relative.