Departure from Rohatyn to Poland and Germany: May – July 1946 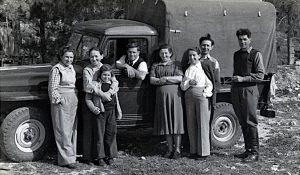 The Stryjer family in Israel after the war, ca. 1950s.

In the beginning of May 1946, we departed for Poland on a freight train. Some more people were gathered on the way. The train was going to Rychbach (Reichenbach). Today this town is named Dzierżoniów. The Stryjers and I got off near Kraków. The Stryjers found out that their son was in the Russian army and he was stationed in Poznań. We boarded a passenger train and went to Poznań. In Poznań nobody could give us any information as to the whereabouts of the Stryjers’ son. We decided to go to Rychbach where, we knew, our people had gone. When I arrived at Rychbach I met with my cousins Lusia and Rózia and their father Shiye. I was glad to see them. They looked so much better than in Rohatyn. They owned a grocery store; I helped in the store. We were waiting to leave for Germany, US Zone. Around July 1946 we all left for Szczecin; from Szczecin we were smuggled across the border to Germany, French Zone and then to US Zone, Displaced Persons (DP) camp Schlachtensee in Berlin.

The Stryjers stayed in Poland, still hoping to find their son. I kept in contact with them. Subsequently they emigrated to Israel in 1948. They got together with their son who was in Władysław Sikorski’s army.[70]

We never forgot our experience of going to the graves in Rohatyn in 1946. When I went back to Rohatyn with my wife, Bea, in June 1998 with a group of fifty people, the event of my going there to say Kaddish in 1946 brought back all the memories. The Stryjers were not alive anymore to go with us. The Rohatyner people residing in Israel organized the trip. Two monuments were erected on the two sites of the mass graves.

[70] Władysław Sikorski (1881–1943) was a military leader and Prime Minister of the Polish government in exile during WWII, until his death in a plane crash. He re-established diplomatic relations with the Soviet Union in 1941, and in 1943 created the Polish II Corps under the command of Władysław Anders.