Military trucks came to the DP Camp Schlachtensee and took us to Bavaria (southeastern region of Germany). They left us in a special gathering point (I do not remember its name). They asked us where we wanted to go from there. Since Lusia, Rózia, and Shiye Glotzer were in the town of Bayreuth, I decided to go there and join them. Some of the people from our transport went to various DP Camps nearby. Before I left Poland I heard from my father. He had found out that one of his sons was alive. He tried to contact me. Since I was not in any one place very long, he had difficulties. Before I left for Bavaria, I received a telegram from my father; I answered that I would send my address when I arrived in Bavaria. When I arrived at Bayreuth, my cousins as usual were very happy to see me.

Promptly I sent a telegram to my father. A few days later I received a message from the Bayreuth post office that my father was trying to reach me by phone. Bayreuth was not equipped to receive overseas telephone calls. They referred me to Nürnberg where I could receive telephone calls from my father. I had to travel seven hours by train to Nürnberg. But I did speak with my father quite a few times. He was very anxious for me to come to the USA and join him. By that time, he had an idea what had happened to our family. He and other Rohatyners erected a monument in memory of the victims of Rohatyn. The monument is in the Mt. Hebron cemetery in Queens, N.Y. (the same cemetery where my father is now buried). I was anxiously waiting in the town of Bayreuth for my departure to the USA. 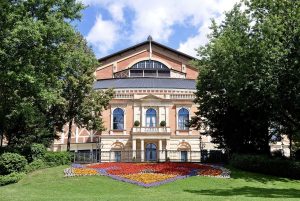 Bayreuth is a very famous town. It is the birthplace of the German composer Richard Wagner who was Hitler’s favorite composer. Hitler established many festivals (Festspiele) there. He had his personal box in the Richard Wagner theater; this became my favorite place in Bayreuth. I and my cousins used to sit in Hitler’s private box and listen to the music. Bayreuth is a very picturesque town; it is surrounded by mountains where Hitler had his residence. We lived in a house owned by a German Herr Meister. He used to point out to us all the places of interest. It was a satisfaction to us to visit all these places which Hitler treasured and now we, the Jews, were there.[80]

In the meantime, I kept receiving packages and money from my father. He was working hard to bring me over to him. It was complicated as I was not a minor anymore who would be allowed to join a father. I even changed my birthday, but it dragged on and on. Whenever I spoke to my father, I always had a feeling that he was not in good health; of course, he never admitted it to me. I felt that he was very impatient that it was taking so long to bring me over to him. I kept reassuring him that the day of my coming to him was very near. All the red tape seemed to take forever. Finally, during President Truman’s administration the Congress passed the Displaced Persons Act (1948) which allowed the DPs to emigrate to the USA provided that they had a sponsor. This of course was not a problem for me.

During my ordeal the only thing that kept me going was the hope that someday I will go to my father, my only parent and close relative. I was planning that I would be able to tell him what I had gone through to survive. Somehow subconsciously I felt that something was wrong. I kept pushing away my thoughts, but they kept coming back. The last letter which I received was not written by my father. That kept bothering me. During the High Holidays[81] I went with my cousins and their father to some people where they conducted prayers. They handed me a prayer book. As I opened it, the first prayer that came before my eyes was the Kaddish. No matter how I turned the pages of the prayer book, I kept coming to the page of the Kaddish. I tried not to think about this episode, but it kept coming to my mind.

My cousin Rózia with her boyfriend Motek Unglick (he changed his name to Osher) emigrated to Palestine (today Israel). My cousin Lusia and her father Shiye emigrated to Canada. I was going through the process of finally emigrating to the USA.

[80] There are a few inaccuracies in this paragraph: Richard Wagner is buried in Bayreuth, but he was born in Leipzig; although Hitler attended a number of festivals in Bayreuth, he did not establish them; and Hitler made a second home at Wahnfried, Wagner’s former villa in Bayreuth, but the mountain residences Hitler kept are in southeastern Germany, not near Bayreuth. – Ed. [81] The most important Jewish holidays of Rosh Hashanah and Yom Kippur.