Tragic Discovery – My Early Years in the USA

In June 1949 I arrived at Bremerhaven (a German port). After some more red tape I boarded a military ship, the General Hauser, which was supposed to take me to New York. When I arrived at the pier in New York, many relatives came to meet me. I had never seen any of my aunts or my cousins before. My aunts emigrated to the USA before I was even born, and my cousins were young or some born in the USA. I kept looking for my father. Nobody was willing to break the terrible news to me that on April 2, 1949, my father had passed away. I considered this my second Holocaust. Later I found out that his health had deteriorated when he learned what happened to his wife, sons, and the entire family.

My aunt Rose Altman (my father’s sister) with whom my father lived until his death, decided that Toni Czekay’s brother-in-law, Herbert Fleissig, should be the one to tell me this tragic news. Herbert Fleissig was married to Toni Czekay’s sister Adele (Adele and her son were murdered in the Holocaust). They felt that Herbert, feeling his own grief, could tell me about my father’s death. By that time nobody had to tell me. I knew that I had lost my only close relative, my father.

I sat Shivah and then I went to the temple to say Kaddish. I arranged for a monument to be erected on my father’s grave. I just could not reconcile with the fact that I could not see my father alive even for a short time. I even regretted that I had come to the USA. My aunts and cousins were trying to snap me out of my depression, but everything was in vain. I felt myself drifting from day to day. I lived in the same room where my father had with my aunt Rose and her daughter Etta. I felt that they could not understand me. I did not even try to tell them what I had gone through. In those days none of the survivors were talking about their experiences during the Holocaust; nobody would have believed it anyway. 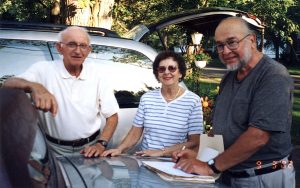 Jack and Bea Glotzer with Howard Steinmetz in Livingston, New Jersey (in the U.S.)
in 2002. Source: Steinmetz Family Collection.

I believed that if I told somebody about my ordeal, they would think that I was a liar. Hitler was right when he said that he would make the destruction of the Jews on such a big scale that nobody would believe it. The Holocaust survivors kept burying their experiences deep in their souls. Once in a while we, the survivors, would talk between ourselves about our experiences. We were therefore comfortable being among the newcomers, as the Americans were calling us “greeners”.

Therefore, when I met my future wife, Bronia Walzer, in 1950, I felt comfortable to share my experiences with her. I felt that she understood me. I kept in touch with Lusia and her father. I visited them in Canada. They also did not discuss their ordeals during the war years. As a matter of fact, Lusia died on Passover 1999 without telling her children and grandchildren how the three of them had survived. There was always a bond between us. When Lusia died I suffered a big loss.

My first year in the USA was very turbulent. I just could not find myself. The nightmares of my past continued constantly. Somehow with the help of my wife and her parents I created a successful and a productive life. When I became a father in 1954, our daughter Terry, who we named after my mother Toba, was a precious gift to us. Then in 1958 our son Mitchell was born; we named him after my father Mayer. I then realized that my struggles to survive were not in vain. I consider myself a lucky and a happy man.

I became a grandfather to Jeffrey and Michael.

Somehow Hitler’s final solution was not so final. I consider my children and my grandchildren a miracle of my survival.

I believe in the victory of good over evil.