Quick Note about Our Day in Rohatyn

As the topic line says, just a quick note – nearly midnight and sitting in our hotel room in Rohatyn with Alex Feller, sorting photos and notes, and talking about the events of the day. 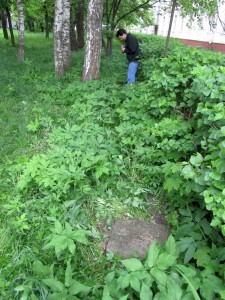 The Jewish headstones scattered around town seem to have no end in sight. While viewing and photographing the dozen or so we already knew about from Mr. Vorobets, more elderly Rohatyners arrived to watch, talk, and walk Mr. Vorobets (and us) to their gardens, farms, driveways, walls, houses, river banks, etc. where more headstones were stacked, half-buried, or merely forgotten yet visible.  The number grows and grows. With iron crowbars, Jay and Alex pried stones out of dirt and mud and turned them over to expose Hebrew lettering obscured by plants and mud. Mr. Vorobets washed the letters so they could be read. Alex has been translating those that could be read (but will likely need some help).  We were led to several streets where the Nazis had ordered that the walkways be paved with headstones; they were scattered along creek banks, they are half-buried, half-exposed along road sides.  Some are legible; some are not.  We have taken many, many photos.

Some of the Jewish headstones found around Rohatyn. Photos © 2011 Jay Osborn.

A young Rohatyner learns about the Jewish past of her town. Photos © 2011 Jay Osborn. 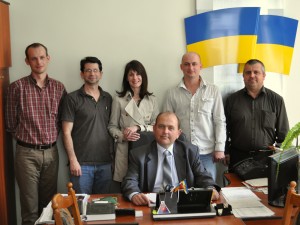 At the Rohatyn Mayor’s office, with Ihor and City staff. Photo © 2011 Jay Osborn.

We also met with the Rohatyn Mayor and the librarian Ihor again acted as translator. He stayed with us all day, including our 4 hours with Mr. Vorobets around town.  Next Tuesday, when we  return to Rohatyn again with Alex, together with Mitchell and Dori, we are to be interviewed by the district newspaper and a local TV channel –  the purpose is to get the word out to townspeople so they know to contact Mr. Vorobets and/or the Mayor for transferring the headstones to the new Jewish cemetery.  The Mayor arranged for permits to be granted, wherever needed. We  will prep-pay a sum to Mr. Vorobets to cover these transportation and relocation costs.

It was an emotional day, meeting with a woman who remembered not only several Jewish families of Rohatyn, like Alex’s Faust family, but who also had a letter and photos exchanged with Sabina Fuks in Israel (and written in Polish) until the mid-1970s.   Others approached with information on headstones in the far corner of their farms and their gardens.  We took many photos and have tried to document the location of these new sources so they can be collected and moved after our departure.