Jay and I returned to Krakow yesterday from a visit to Rohatyn. We traveled with group member Alex Denysenko & his driver Vitaly, as we have many times in the past.

This trip happened almost exactly one year since our first meeting in May 2011 with Ihor Klishch of the Rohatyn library and Mr. Vorobets. It was at this initial meeting that we learned from Mr. Vorobets about the existence of Jewish headstones and headstone fragments still found around the town today, 70 years after they were ripped out of the two cemeteries by the Nazis. 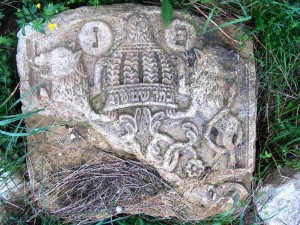 One of many headstones recovered from the garden and courtyard. Photo © 2012 Jay Osborn.

Here we are a year later, and as you know from my many past postings to the group, this project grows, and new, unanticipated issues continue to present themselves, which I would like to share today with the group.

Our latest visit timed well with the recovery earlier this year of a dozen or so large headstones uncovered from the private garden located on ul. Ivano-Frankvsk, on the same street as the Rohatyn library. You will recall that the existence of these stones below the soil had been known for some time, but their removal – which necessarily involved the destruction of this private garden and its vegetable and floral plantings – had been awaiting sufficient helping hands, digging implements, hauling equipment, and proper weather and re-planting conditions.

In addition, several additional large headstones were also uncovered adjacent to this garden, in what had been the courtyard of Gestapo headquarters during the War. This is the same courtyard where today stands a pink Soviet-era stucco structure whose retaining wall on the opposite side (revealed during our last visit in October 2011) appears to be entirely composed of Jewish headstone fragments. (Please see last year’s postings on this topic for more details). 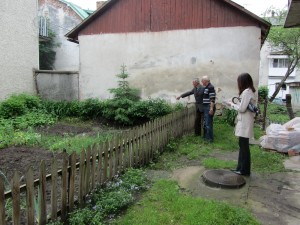 All the headstones pulled from the garden and the courtyard, discussed in greater detail below, have already been moved to the “new” jewish cemetery at the north end of town to join the other headstones and fragments that have been accumulating there.

Mr. Vorobets supervised and coordinated this latest project from start to finish, and Peace Corps volunteer Abe Lyons shot photos for our group while the digging and removal were taking place.

Here are photos we took of each new headstone and fragment – as I mentioned, all are now at the “new” jewish cemetery at the north end of town:

Help from group members in translating these latest stones from Hebrew to English would be greatly appreciated.  Please contact Alex Feller if you are able and willing.

We estimate that an additional 50 – 75 new headstone pieces have been brought by Mr. Vorobets to the cemetery since our last visit in October 2011.

It also appears that some of the larger stones found most recently may belong together (in other words, today they are broken into two pieces but belong together).  Our hope is that those pieces that belong together will be discovered when translations of the Hebrew inscriptions are made.

Regarding the garden, Mr. Vorobets advises that there are several headstones that are still buried there, located in one corner of the garden (away from the house and opposite the street) plus outside the wooden picket fence between the fence and the house. Mr. Vorobets hopes to recover these later in the year when the garden is dormant and another group of helpers and transporters can be put together. 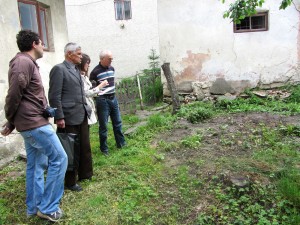 Regarding the courtyard, most of the headstones they found and recovered were buried nearest a medium-sized, one-story, stuccoed pink Soviet-era building, which immediately presents itself when exiting the private garden through a small wooden gate at the far side of the property (away from the street). The building is located on a corner of this former Gestapo courtyard. There is also a small wooden shed nearby in this same area that is deteriorating. In past visits, it had been very difficult to clearly see around and near the building and shed because both were covered with thick bushes, ivy, garbage, and growth. All that has now been removed. Unfortunately, after removing the growth and garbage, a large, scary gapping split has been revealed in the integrity of the stucco building. It is clear in looking at the building and speaking with Mr. Vorobets that it would be dangerous and unsafe to continue to work near and around the building without proper precautions and professional equipment. Cessation of work inevitably excludes any dismantling of the retaining wall made of headstones on the other side of the building – in the same courtyard – as this wall is part of the building foundation, what little there is. Mr. Vorobets promises to monitor and continue to work on this project for our group. 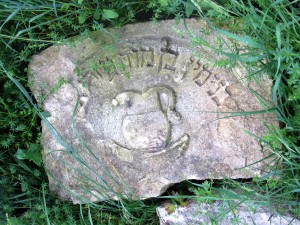 Another of the headstones recovered from the garden and courtyard. Photo © 2012 Jay Osborn.

In the larger picture, Mr. Vorobets believes that the entire courtyard, enclosed by buildings whose front facades face ul. Shevshenko and Halytska (the Rynek) is suspect. He seems confident that many more headstones will be found here.

Mr. Vorobets remembered seeing 3-4 extremely large, intact headstones that had been exposed a few years ago when the corner building nearest the shed had been renovated. While we were there, he spoke with the current owner of that building and a neighbor asking about these, but neither had any information, but they too remembered seeing them at this location. 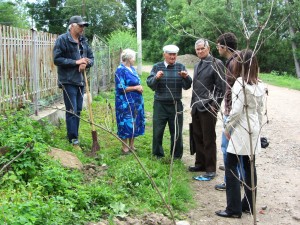 We drove together to then see the several locations around town where headstones had been found since our last visit. These areas included ul. Zavota and ul. Zalena – places where many stones had been found in 2011. While driving along Zalena, Mr. Vorobets got out and spoke with several residents. A few new headstones were spotted en route along the unpaved road, east of Babince in the area called Kutsiv (historically a separate town but today considered part of Rohatyn, per Abe). Mr. Vorobets promises to make arrangements to have these picked up. The area, as I mentioned, is where many headstones have to-date already been recovered. Mr. Vorobets believes the area will over time reveal many more, as there once was a pedestrian footpath lined with Jewish headstones that ran here and continued to the larger paved main road connecting to ul. Shevshenko, the main road running east of town. 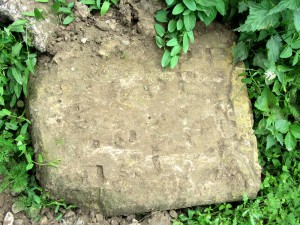 One of the headstones found by residents on vul. Zelena. Photo © 2012 Jay Osborn.

The location of all headstones found in town to-date can be seen on this map, which will continue to be updated as necessary:

Mr. Vorobets reminded us that, during the War the entire road leading from the Rohatyn Police Station (today, ul. Halytska) to the train station had once been paved with headstones. As this road continues to be a major north-south thoroughfare from the Rynek, it would not be unrealistic to assume that it would cost tens of thousands of U.S. dollars to excavate it. The road is today covered in layers of asphalt; gravel covers that portion leading to the rail station.

During 2011, there were about a dozen or so headstones moved to the cemetery but left at a side location near some shrubs that is not near the central Shoah memorial erected in 1998. Mr. Vorobets promises to make arrangements to have those set apart moved to join the others.

Rabbi Kolesnik [of Ivano-Frankivsk] is also desirous of coming to Rohatyn to see the Jewish headstones our group has had moved to the “new” jewish cemetery. He proposes to examine these and to ascertain which may have originally come from Rohatyn’s “old” jewish cemetery at the south end of town. For those “old” headstones and fragments, he would like to see them brought back to that cemetery, rather than left at the “new” Jewish cemetery.

Again, if members have opinions and comments on this topic, please raise them for discussion, as dividing the headstones (old versus new) will have implications for any memorial the group may wish to erect using these headstones.

[Note: This is part of a report Marla Raucher Osborn sent to the Rohatyn District Research Group on 26May2012, based on a two-day visit to Rohatyn by Marla, Jay, Alex Den, and Vitaly on 23~24May; another part of the report is recorded in this News section on the same date. The same topics in this report were also published by Jewish Heritage Europe in their News section, and a longer essay on the issues these events raised was published in the magazine section JHE: In Focus.]