It is very late after a full day of exploring Rohatyn, examining and locating some family homes, and documenting Jewish gravestones in the old cemetery. So I will make this quick. 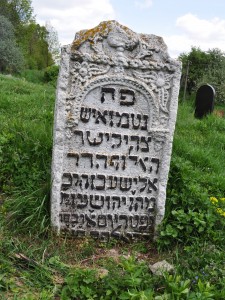 I have uploaded [to the genealogy group private site] images of all of the tombstones that we were able to photograph and document at this time. These include tombstones in the old cemetery, the new cemetery, and outside the cemeteries spread throughout Rohatyn.

There are still several tombstones in the new cemetery that have not been photographed or examined due to lack of time and difficulty in access due to overgrowth of vegetation.

There are other tombstones that seem to be face down and are too heavy to move.

I have to note that this important, emotional, and gratifying project would not have been possible without the following people:

[Note: This report was originally sent by Alex to the Rohatyn District Research Group.]