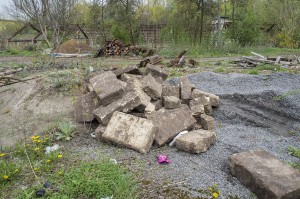 The stones from the garden. Photo © 2014 Jason Francisco.

Just to report that 25 matzevot were recovered on April 1st from the private garden in Rohatyn on Ivan Franko Street.  These were known to exist and Mr. Vorobets was waiting for their removal.  Jason Francisco – who is making photographs in town and communicating with me for an exhibit opening in Krakow on June 18th at the Galicia Jewish Museum – reported this information tonight and sent the attached photos.  I have asked him to please try to get photos of the headstone inscriptions.  They were transported to a spot beside the mass grave memorial just south of the new cemetery. As you can see, they are quite large pieces. 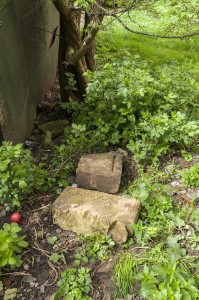 An additional 2 headstones were subsequently also discovered two days ago in the former courtyard of Gestapo headquarters – same location where others once composed the retaining wall. This was an accidental find, but a location that has long been suspected as having more. 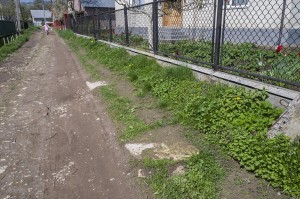 Headstones in long use as paving stones. Photo © 2014 Jason Francisco.

Later that day while driving with Mr. Vorobets around the town where matzevot have been previously recovered, another two were recovered, one used to pave a sidewalk, and one to support a drainage project beside an open sewer.

We still need to confirm that all of these new discoveries will been taken by Mr. V to the “new” cemetery for safekeeping, and to take photos of the stones when one of our group is next in Rohatyn.