Headstones Have Been Moved 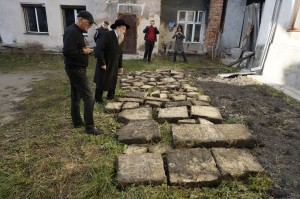 Headstones in the courtyard earlier this month. Photo © 2014 Jay Osborn.

I am very happy to report that Alex Den received a letter from Mr. Vorobets in Rohatyn reporting that the large pile of Jewish headstones recently recovered from the courtyard of former Gestapo headquarters (today a private but communal car park for surrounding apartments) were collected and transported on November 24, 2014 to Rohatyn’s “old” Jewish cemetery.

This effort, which Mr. Vorobets coordinated and managed, involved employing (for a pre-agreed fee) 8 young Rohatyn men, tractor with trailer, and a truck with two drivers. The day’s event took 6 full truck-loads and was completed by the evening.

The titanic effort (to use Mr. Vorobets exact words) also included moving to the “old” Jewish cemetery the large pile of Jewish headstones that had been recovered earlier this year and collected together behind the private business located not far from the mass grave site at the north end of town.