Last November, accompanied by Sofia Dyak, Andrij Bojarov, and Tarik Cyril Amar, Jay and I visited Rohatyn with guide and friend Alex Den (Alex Denysenko), and Rabbi Kolesnik of nearby Ivano-Frankivsk. One purpose of the visit was to examine the recent recovery of dozens of Jewish headstones from a courtyard in Rohatyn that during the War was used as a parking lot for Gestapo headquarters, today a private apartment complex. During that visit we made arrangements with our local contact, Mr. Vorobets, retired school teacher and historian, to have these headstones moved to Rohatyn’s old Jewish cemetery where our descendants group is planning a memorial. This week Alex made a visit to Rohatyn and here are the first photos of those headstones now safely at the cemetery. 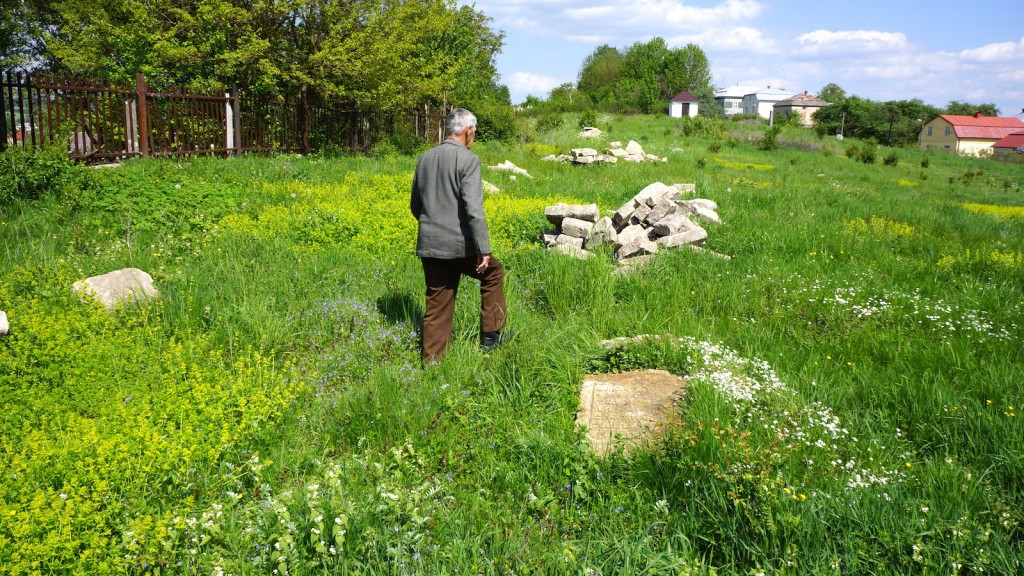 Another view of the gathered stones. Photo © 2015 Alex Denysenko.

Photos by Alex Den from his visit this week:
https://drive.google.com/folderview?id=0ByFfzZp0idfiY2FuOTY5UVpEeWc&usp=sharing_eid

To read about our November visit, in an article at Jewish Heritage Europe:
http://www.jewish-heritage-europe.eu/2014/11/09/more-fragments-of-matzevot-recovered-in-rohatyn-ukraine/

Jay and I are hoping to make our next visit to Rohatyn sometime in late summer, likely August.