Every trip to Rohatyn includes a review of the Jewish Headstone Recovery Project, and like always, today some new discoveries were made. 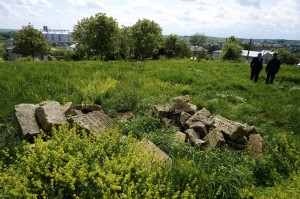 This morning we visited several matzevot recovery sites in town with Mr. Vorobets as usual, this time also with long-time project supporter Tom Traber of California; we also visited the Rohatyn old Jewish cemetery (where the stones are being collected for a future memorial) later in the day. When we met with Mr. Vorobets, he reminded us of the two unusual stones recovered earlier this year from vul. Shevchenko, and he reported that several additional large fragments had recently been extracted from a garden in the Zavoda residential area across the Hnyla Lypa river southwest of the town center. The garden at vul. Zavoda 10A has given up matzevot pieces three times during the past five years, and now a few weeks ago another ten pieces were extracted and transferred (under the direction of Mr. Vorobets) to the old Jewish cemetery in town. These new stones were also a little unusual, because of their color, which was somewhat dark as if the stone surfaces had discolored from exposure to something in the soil. Several of those recent pieces are shown in photos attached here.

Some of the matzevot recovered from the garden at vul. Zavoda 10A a few weeks ago, now in the old cemetery. Photos © 2016 Jay Osborn. 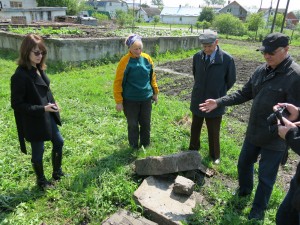 The owners of the garden are continuing to work the site, and as their digging proceeds they unearth additional stones. Just before our arrival at the place, they had uncovered another four large fragments, each quite ornate; when we arrived, the garden owners used water, a broom, and handfuls of grass to reveal the carving on the stone faces.

When we returned to the lot later in the afternoon, they had already completely cleaned the stones. Mr. Vorobets will arrange for transport of these new stones to the old cemetery in the next weeks. 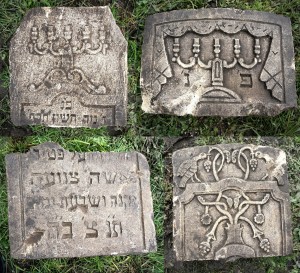 The new headstone fragments after cleaning by the garden owners. Photos © 2016 Jay Osborn.

And Mr. Vorobets has also negotiated with the property owners to investigate the entire garden for additional stones, once the growing season is over. As with the garden on vul. Ivan Franko, he and workers will use steel rods to probe under the soil surface, and any stones found will be recovered and transferred to the cemetery.

We replenished the cash Mr. Vorobets keeps for us to pay the laborers; the garden owners are not asking for any compensation, only that we return the site back to a workable condition after the recovery is done (as we did on vul. Ivan Franko). We are looking forward to seeing what else this garden will yield later this year.