Yesterday Jay and I made our first visit since 2008 to Rohatyn.  We were accompanied by researcher and fellow Rohatyn group member Alex Denysenko and his driver, Vitaly. 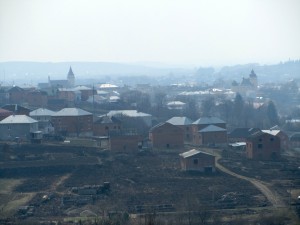 View of Rohatyn from a hill north of town. Photo © 2011 Jay Osborn.

For this first visit, we decided to make as our primary goal finding the sites we were unable to locate in Rohatyn during our wintry 2008 visit; namely, the “new” Jewish cemetery (north end of town), and the two memorials erected in 1998 in the fields where the Jews of Rohatyn and surrounding communities were killed between 1942-44.  With the help of better maps and drier weather, we found them all.  Furthermore, because this time we had someone with us who speaks Ukrainian (Alex D.) we were able to get more out of this visit when we needed to seek help from locals and, more importantly, when an unexpected elderly Ukrainian man approached us at one of the memorial sites (as I will relate below).

On a more humorous note, having Alex and Vitaly also permitted us to have a tasty, authentic – albeit basic – Ukrainian lunch in a small Rohatyn cafe (Cafe Victor) on the east block of the Rynek, a few doors down from the Gymnazium!

First, despite there now being available a new Rohatyn “tourist” map  (the one used, I believe, by group member Edgar Hauster during last year’s motorcycle ride through the town), the Jewish sites are still difficult to find.  The map’s designations for these sites continue to be only generalized.  For anyone going in the future, keep this in mind.   Fortunately, Alex was able to ask and receive help from locals in the vicinity of each of the sites – something we did not and could not do on our 2008 trip.  This made all the difference in our ability to find everything this time.

Second, the Judenrat house (inside the former ghetto) has been undergoing renovation and the plaque is down.  A passerby explained to Alex that the plaque was inside the building awaiting re-installation; let’s hope it goes back up. In looking through my computer folder of Rohatyn photos this morning, I found a recent photo of the plaque (possibly taken by Ruthy during her visit last year?) which had it propped up among pillows, as if on a couch, suggesting that maybe it has been down for a longer period than just since last summer.

Third, the condition of the sites:  the “old” Jewish cemetery on the hill behind the wooden St. Nicolas Church looks about the same as it did in 2008, perhaps a bit better.  The gate is still up, and while the area is overgrown with weeds, there appears to have been some clearing and burning of growth recently.  The dozen or so headstones were thus quite visible and did not seem further deteriorated.  There were some “spent” candle containers scattered around the memorial monuments, suggesting perhaps some recent visitors to the site.

Because we had not previously been to the “new” Jewish cemetery or the two field memorials, I cannot comment if their conditions have worsened or improved.

The “new” cemetery on the north end of town was still hard to locate even using the new map (as I mentioned before), and once we did, we found it difficult to climb through the overgrown brush and thorny vines to reach the remaining headstones.  There were three or four tall, fully intact headstones still standing, plus dozens of pieces of headstones lying half-buried horizontally on the ground through this overgrown area, most with Hebrew lettering still partially visible.  We shot photos, as best we could, of the standing stones because the surnames (in Polish) were quite legible (Teichman and Reichbach).

The memorial marking the area in the north end of town where the Jews were killed in 1943 (today, behind some kind of construction materials or equipment business) was, again, initially difficult to find, but Alex was able to speak with people in the vicinity and one kind gentleman (possibly the owner of this business) personally walked us behind the out-buildings to the spot.  There was a lot of garbage back there, and the area butts up against the hill, but someone has strung heavy wire in an effort to “rope” it off.  Within that roped-off area, the monument was relatively clean and undisturbed.  There are two monuments here  (the Hebrew/English/Ukrainian one erected in 1998, as well as and the earlier one put up by the Soviets).  Both were readable and clean.

The March 20, 1942 memorial on the high ridge on the southeast end of town (beyond the Ukrainian cemeteries and the monument to fallen Turkish soldiers of 1918) was very well tended and clean.  Given the time of year, no flowers were planted, but the ground looked recently prepared and fertilized as if plantings are planned, merely awaiting Spring weather and the last of the snows.  While we were standing around this site, an elderly farmer driving a horse cart came over.  The following is a partial summary of what he told Alex, which Alex then translated for our benefit.

As an advance warning, there is graphic material here, which some of you may wish to skip reading:

Mikhailo was born in 1930, so was 12 or 13 when the horrors on this ridge unfolded on March 20, 1942. He says he personally heard the gunshots.  He also heard (learned) from others what they saw and/or were told.

I asked Mikhailo how the Jews were brought to this place on that day – by trucks or on foot.  He said they walked here.  They walked quietly up the hill to the ridge.  They could not yet see the pit that had already been dug for them.  The Germans were clever: they had told the Jews that they were to come to the site to dig a basement for the nearby ceramic tile factory.  It wasn’t until the Jews reached the crest of the ridge that they then saw the pre-dug pit which was for them.  They panicked.  The Jews started crying and screaming and running in all directions.  German shooters, already in place, fired on them.  The bodies fell into the pit.  The pit became very full.

There were men, women, and children there that day.  There was one woman, Mikhailo said, who was in the pit but not wounded.  He heard that she crawled out of the pit that night and escaped.

He remembered many pretty Jewish girls in Rohatyn.  One Jewish girl was particularly beautiful.  In the shooting and chaos, a Gestapo officer spotted her and went to her.  He took her by the hand and told her to “run fast”.  She did.  Another Gestapo saw this, but looked the other way.

On the roof of a distant house – still standing and visible to the right when facing the memorial and the ridge, located beyond the Turkish monument and the Ukrainian cemetery – townspeople watched the killings.

Interviewing Mikhailo about the events he witnessed during the war. Photos © 2011 Jay Osborn.

I asked Mikhailo if he has ever spoken to anyone before today about all this.  He replied: why would he, when everyone in town already knows.

There is apparently a local historian in Rohatyn, an elderly Ukrainian man; Mikhailo kept insisting we should talk to him.  I believe this is the same man Ihor Klishch, the new, young manager of the Rohatyn library computer lab, has also suggested we meet; we hope to on our next visit.

We have posted photos from yesterday here:
http://www.pbase.com/nuthatch/ua_2011_rohatyn_t

Thanks again to Alex D. for making yesterday’s trip possible… and so memorable.