Newly-Built Ohel in the Old Jewish Cemetery in Rohatyn 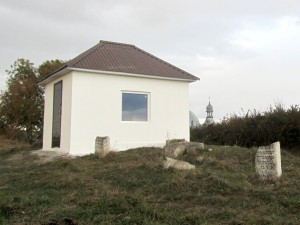 For those of you who have been to Rohatyn in the last 6 months or so, you may have noticed that there is now a white building standing over three of the important remaining graves at the top of the hill (closest to the entrance) in the old Jewish cemetery at the south end of town.

Last night, through the website that hosts our Rohatyn (and travel) photos, we received the following message: 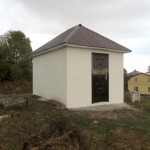 I work for Rav Israel Meir Gabai of Ohalei Zadikim. He restores Jewish cemeteries and builds tents over the graves of the righteous throughout eastern Europe and the world. That surprise “oheil” that you discovered Oct 2011 is another example of his work. I was also there at that time to photograph the project. You can check out my Ukraine gallery.
– Efraim D.

I have not followed up on any of the links sent, but if anyone wishes to pursue this for more information – on behalf of the group – that would be great. 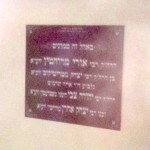 The plaque inside the ohel states who rests inside; it reads:
Rabbi Uri from Rohatyn, son of Rabbi Itzhak from Maritkov;
Rabbi Yehuda Tzvi from Stratyn and his son Rabbi Yitzchak Aaron from Rohatyn.

Here is a Wikipedia article on the ohel tradition:
https://en.wikipedia.org/wiki/Ohel_%28grave%29