This article is also available in English. 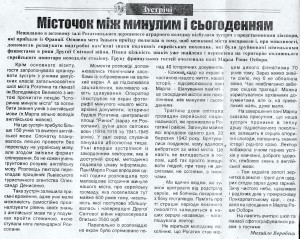 Not long ago, in the auditorium of the Rohatyn gymnasium was a meeting with members of our diaspora community currently living in France. The main purpose was to get the help of locals in their search for old Jewish gravestones that were destroyed and scattered by the Fascists during World War II. A few have already been found and have been returned to the territory of the old Jewish cemetery near the stadium (field). The French guests were led by Ms. Marla Osborn. 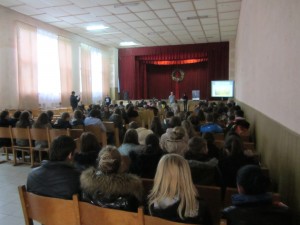 Over 150 students and English teachers were at the meeting. At first the plan was to have the meeting without a translator, but then it was decided that because not all of the students speak English so well, that a translator was necessary. Translation was done by the Director of a Lviv-based tourist company, Alex Denysenko.

The meeting gave a very pleasant impression, and it also gave the students the ability to assess their level of English and learn about the place that Roxalana once walked.

The lecture was supported from a technical perspective by images on the projector screen. This made the presentation much more interesting. Pictures that were shown on the screen included old historical photographs of our city, archival documents, historical buildings, the old market square, and the ruins from both World Wars. In the hall it was absolutely quiet. It was the students’ first experience with a lecturer who in a methodological way taught interesting information. Ms. Marla spoke for an hour about the history of our city and the history of the Jewish community, who first came here over 600 years ago and who numbered about 3,500 before World War II.

Parallel to the pictures on the screen were different historical documents. “Everything on the screen is a part of us, a part of our history” explained Ms. Marla. “To hold dear memory is our bridge between generations, between the past and the present.”

A tragic fate awaited the Jews who lived in Rohatyn and the surrounding areas. Almost all of them were killed in the course of one day, the 20th of March 1942. The only ones who were saved were those who stayed outside the limits of the city. It is impossible to comprehend that it was so simple to kill so many people, not tens or hundreds but thousands.

“We are so grateful to those who risked their lives to save Jews in the face of the Gestapo. The memories of such people will stay in our hearts forever”, the lecturer explained.

The younger generation struggles to believe that Rohatyn was the place of a wild fanaticism 70 years ago. It is now hard to find a family that would not have been singed by the war. People are forgetting this history. There are some archival documents, but not very many.

At the end, Ms. Marla said that the point of our meeting was to impart a warmness of soul upon the students, to instill in them knowledge of their history and the history of their native land. The lecturer wished the students health and success, and that they may be successful in their studies. 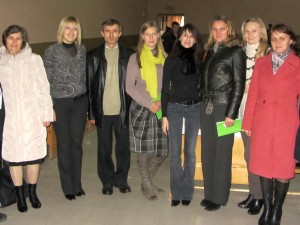 “If you plant a golden seed, it can turn into something beautiful under the soil. I wish you clear skies, happy days, and a beautiful pre-Carpathian land,” Marla Raucher Osborn said in conclusion.

The students and teacher of the gymnasium took their pictures with Ms. Marla to remember her by.