Report from Rohatyn: Status of the Matzevot Project

It has been 6 months to the day since my last visit to Rohatyn. Since then, [our group] has launched a project for the commemoration of Rohatyn’s lost pre-War Jewish community. I am in Rohatyn with Lviv artist, architect, and friend Andrij Bojarov, with whom I have been working on ideas for this memorial project. The project envisions incorporating Jewish headstones and headstone fragments that have been gathering for the last three years in Rohatyn’s “new” Jewish cemetery into some kind of memorial wall which would be placed at one of Rohatyn’s two devastated Jewish cemeteries. This is our first time here together. We are expressly in Rohatyn to together walk the cemeteries and absorb the physicality of each place. To listen. To feel. To be inspired by the landscape and the history of each locale.

Last night over dinner in Lviv, Andrij and I talked generally about memorial walls, the desire to find the right “voice” for the project, and the importance of involving Rohatyn’s present-day (non-Jewish) Ukrainian population in the project – a project which we both agree should be one of community heritage and not just Jewish heritage. We also agree on the need to make the memorial accessible to the town; not segregated and separate by opaque walls and barriers.

In the end, Andrij’s most recent idea seems to us to be the best: to make the “new” cemetery at the north end of town a “first-stop” for information on Rohatyn’s Jewish heritage. Although this is the place where the headstones have to-date been collected – and considered the likely candidate for construction of a memorial wall – we both agree that the new cemetery’s proximity to the main road (in one direction, from Lviv; in the other, from Ivano-Frankivsk) and its substantial distance from the center of town – all point to making this the starting point for those coming to Rohatyn to visit and learn about the town’s Jewish heritage. We both envision a discrete wall containing information (and maybe old maps and photos) of the two Jewish cemeteries, the two mass grave sites, the six synagogues (today, in near-ruin), the mikvah, the Judenrat, etc. 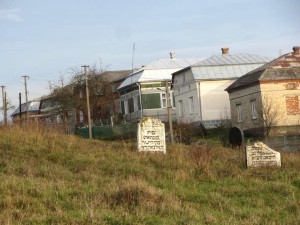 We both now conclude that the right place for the primary project – the proposed memorial wall of headstones – should be the “old” Jewish cemetery at the south end of town: centrally-located, inspirationally situated atop a hill above town, and historically significant to Rohatyn’s 400+ year Jewish presence in the town.

We both also agree that the [heritage] project can unfold in stages: the first being creation of the informational point at the new cemetery, with signs placed at the nearby main road; the second – over time and as more funds can be raised – the memorial headstone wall at the old cemetery, which we both recognize will be a more complicated and expensive project requiring greater analysis (room for the wall to grow as more headstones are found, ability to re-combine headstone fragments if matching pieces are subsequently discovered, etc). 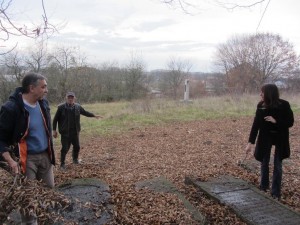 So, we start our day here, and immediately discover a wonderful surprise: a large section on the distant edge of the cemetery that had previously been inaccessible due to an uncontrolled bramble of trees, shrubs, weeds, and thorny vines, had been cleared away!

We spot an elderly man potting one of the uprooted trees. He explains that the City recently did this work. The newly-cleared section has revealed several large headstones with Hebrew and Latin letters. These have never been documented or photographed. Furthermore, it is clear that these headstones have always been at this cemetery (not moved here for safekeeping). The bases for some are still planted even where the headstones themselves are toppled. More importantly for the members of the RDRG, names (and some professions) are legible. Most importantly for me, death dates are the most recent we have found to-date, from the late 1930s. In other words, these headstones represent the last Jewish burials in Rohatyn before the Nazi occupation. 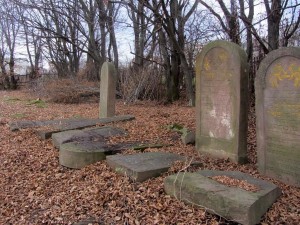 More clearing of trees and weeds needs to be done, but we claw our way through the growth (now leafless because winter is coming) and immediately discover another large legible headstone lying flat under leaves and mud dating from the same period. We are confident that more will be uncovered when the cleaning work resumes.

Excited by our finds, we immediately go in search of Mr. Vorobets, but he is nowhere to be found, either at his home, the nearby cafe, the library, or the school where he used to teach. We decide to go make an appointment to meet with Rohatyn’s Mayor to officially thank the City for its clean-up efforts and to introduce the topic of the memorial project. 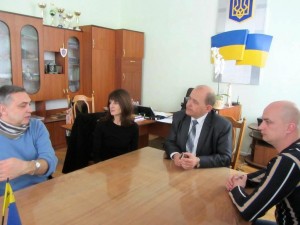 The Mayor’s office is busy with townspeople waiting to be seen; it is after lunch and the work day has resumed. It has been 2 1/2 years since I last met with the Mayor and his staff – on that day, I was with RDRG founder, Dr. Alex Feller of Chicago. Despite the passage of time, I am immediately recognized by the Mayor’s secretary, and in less than a minute, the Mayor emerges from his office and warmly invites us in. We are joined by the Deputy Mayor and a local newspaper reporter (a former English teacher in town) who happens to be there covering another matter. After some discussion, the Mayor explains that plans are underway for Rohatyn to celebrate the 70th anniversary of « its deliverance from Fascism ». The chosen date: July 27, 2014.

Andrij and I exchange glances pregnant with meaning. We are both thinking the same thing:

How great if the RDRG could have something constructed by July 27th so that Rohatyn’s Jewish past can play a part in the town’s big commemoration.

Just as we are leaving the Mayor’s office, Mr. Vorobets walks in. He did not know we were there. We did not know he would be coming. 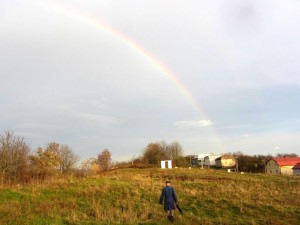