This is a summary of our latest visit to Rohatyn on Sunday, July 27, 2014. You may recall that this date had been chosen during my last visit to Rohatyn in November 2013 when the Mayor noted that the City was planning 70th anniversary events for July 27th to commemorate the end of the town’s Nazi occupation and liberation by Russian forces. The Mayor asked if a representative of Rohatyn’s pre-War Jewish community could be present, and of course we said yes. Since November, however, we received no confirmation whether the commemorative event was still going forward (in light of political and military actions of Russia in Ukraine this year). As it turned out, the event took place in Rohatyn not on July 27th but on July 23rd. Although we missed attending, there was still plenty to do to occupy our day.

Before talking about our day in Rohatyn, I will share with you the people I met with in Lviv. 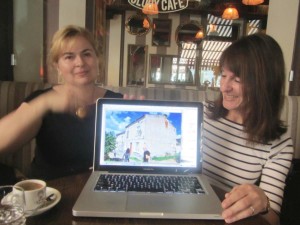 Luba and I met a few months ago on facebook. She was born in Rohatyn and her parents still live there on Valova Street, making them virtual neighbors to many of our families, including my Horn family. Luba’s family moved to Rohatyn in the 1950s, and she herself today lives in Gdansk and Lviv (her husband is a diplomat). She studied at Lviv’s Polytechnic University, specializing in geophysics and astronomy and keeps very close ties to Rohatyn and its teachers. Mr. Vorobets was one of her teachers, and Luba has kindly acted as intermediary when recently we needed to advise Mr. Vorobets about our July 27th Rohatyn visit.

Luba met us in Lviv for a coffee and expressed her desire to become involved with us. Her interest would be to facilitate, if possible, some sort of educational cooperative program between our group and Rohatyn students, similar to those you find today in Poland, whereby students receive academic credit for contributing and pursuing projects that involve learning about their town’s pre-War past, including Jewish past, and in the case of Rohatyn, Polish past as well. Such programs may include researching Jewish families and sites of Jewish heritage, conducting tours for visiting Jewish tourists, and possibly also maintenance of the Jewish cemeteries and mass grave sites. As I said, such programs can today be found in dozens of schools across Poland, and I think could be replicated with success in Rohatyn. I hope to pursue discussions with Luba on this topic and possibly involve other RDRG members, such as Jeremy who has had on-the-ground experience in western Ukraine in similar projects. 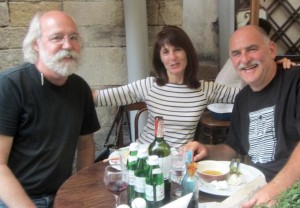 It was delightful to again find a way to meet up with Rohatyn group member Edgar, who arranged his annual Galicia-Bukowina motorcycle trek from Germany to meet us for a dinner in Lviv! We not only had a chance to catch up on personal news since our last visit in Prague in October 2013, but to learn about his many other projects involving Czernowitz. 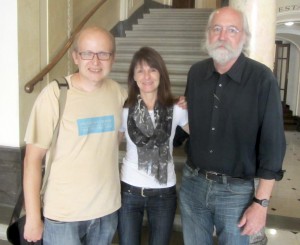 You may recall that earlier this year I was contacted by a Lublin-based organization called Shtetl Routes which is affiliated with Brama Grodzka in that City – a project focused on Jewish heritage and Jewish theatre in Lublin. Shtetl Routes, among other projects, plans to issue a book in 2015 that will feature a number of towns with interesting and/or important Jewish heritage sites and histories, and asked to include Rohatyn, which it became aware of on facebook. Last month, its western Ukraine coordinator Viktor Zegreb traveled with a team to Rohatyn and met not only with Mr. Vorobets, but also the Mayor, and visited our Jewish cemetery and mass grave sites. This trip followed a number of emails between me, Viktor, and Shtetl Routes Director Emil Majuk, supplying historical background, maps, photos, and information about our group and projects in town.

Although Viktor was unable at the last minute to come to Lviv, Emil took an overnight bus from Lublin arriving for breakfast at our hotel on our last day, July 29th. It was great to meet and we shared a lot of information, including our most recent visit to Rohatyn, the status of our headstone recovery project, and plans for the memorial. We promised to remain in touch and work closely as the book and Shtetl Routes website for 2015 moves forward. 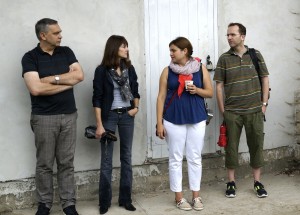 Thanks to Alex Denysenko for making transportation arrangements from Lviv to Rohatyn. Although Alex was unable to join us (he was with several of our members presenting at the annual IAJGS conference in Salt Lake City), he took an active role in making sure we were timely retrieved from the Hotel George that morning in a minivan sufficient to carry our group of 6, plus the driver, which included me, Jay, Andrij Bojarov (the Lviv-based artist we have chosen for conceptual design of the headstone memorial project), Sasha (professional architect and colleague of Andrij), Sofia Dyak (director of the Lviv Center For Urban History), and Tarik Cyril Amar (Professor at Columbia University and former director of the Urban Center). Tarik recently made a sizable donation to the Rohatyn headstone recovery project after meeting me (virtually) on facebook. 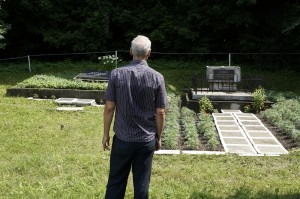 Rohatyn group member Norberto Volij, whose family emigrated from Rohatyn to Argentina (but who today lives in Canada), joined us in Rohatyn, which was a pleasure.

Norberto spent the entire afternoon with us, together with Mr. Vorobets and Rohatyn’s Vice Mayor Stepan Demchyshyn. Mr. Demchyshyn’s son, who currently studies in Linz, Austria, also joined our group, having contacted me the day prior on facebook. His English is excellent and I hope that this bright young man, born and raised in Rohatyn, will become a possible resource for us in the future, perhaps in assisting in finding a successor to Mr. Vorobets, or working with Luba on her proposed project to involve Rohatyn’s students. 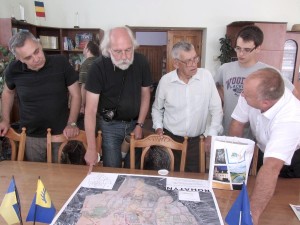 As planned, we brought with us from Warsaw 50 double-sided color copies of the RDRG brochure which our group recently produced in English and Ukrainian. These brochures were delivered to the Vice Mayor who promised a place for them in the public area of the City office on vul. Shevchenko where we met. A special thank you again to Chaya Rosen who worked so many hours earlier this year on the layout, and Alex Den for the final version of the Ukrainian translation.

We also made a gift to the office of the Mayor – on behalf of our group – of a large format color copy of the 1846 Rohatyn cadastral map.

Mr. Vorobets was also given a large format 19th century Galicia map, which we brought for him on behalf of our group.

Discussions were held between the Vice Mayor and Andrij about acquiring a number of documents pertinent to his planning of the memorial, and these went well. Jay will summarize in a separate post the status of the memorial project, as well as the headstone recovery work. 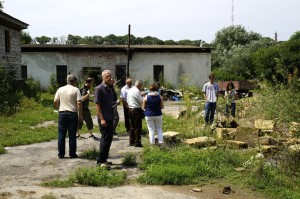 Before visiting the headstones recovered in April, our group briefly stopped in the former courtyard of Gestapo headquarters where, as you know, many dozens of headstone fragments have to-date been recovered. (This location is adjacent to the private garden discussed above). Mr. Vorobets reminded us that the entire area – a large central courtyard surrounded by 6-8 multi-story apartment buildings – likely has numerous headstones underneath the grass, concrete, and sand, but without a coordinated effort involving the City and the courtyard residents, cannot be dug up and excavated. 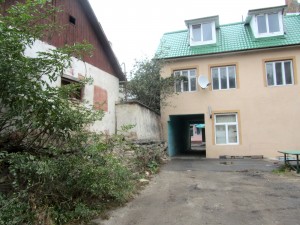 The courtyard, from an earlier visit. Photo © 2011 Jay Osborn.

Sofia suggested that our group create a proposal that would bring together a meeting of the City and courtyard residents to discuss renovating the space into a more pleasant and pleasing communal park, perhaps with swings and benches for families and children. The courtyard, as you know from our past posts and photos, is currently very unwelcoming and not child-friendly. Presenting such a proposal (and getting neighbor approval) would then permit a massive excavation, but with a positive result for the residents. So, while it would be disruptive and dirty while happening, the final result would improve the quality of life for those living there while also helping us to recover Jewish headstones. This idea needs further investigation by our group if we hope to finally discover the extent of headstones in this location – rumored to have been a parking lot paved with headstones during the Occupation – and would necessarily involve require the City, setting a community meeting, notifying neighbors, funding, etc.