This is a brief summary of the status of the headstone recovery project in Rohatyn, and an outline of progress of the cemetery memorial project, from our visit to Rohatyn last Sunday the 27th of July 2014.  I will separately send to Alex Feller a detailed accounting of expenses (for moving stones) in town, photographs documenting the stones most recently collected, and more details about the long-term project.  Alex will label the new headstone photos and add them to the RDRG group site for transcription/translation and discussion. 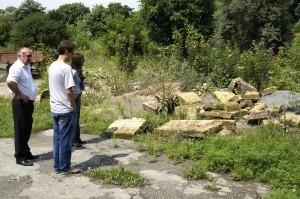 As was reported here in mid-April, about 25 headstone fragments (some quite large) were extracted from a garden on Ivan Franko Street in Rohatyn, the same place where a number of stones were removed more than a year earlier.  Because of the size of these stones and the difficulty of getting a large wagon into the new Jewish cemetery (where all other recovered stones have been collected to date), this time the stones were moved to a corner of the building materials yard north of town where the northern mass grave memorial is located; these latest stones have been placed very near the memorial.

In all there are about 20 stones with lettering carved on them, and several other fragments without lettering but with decorative borders and/or images of animals, etc.  A couple of these stone pieces are quite elaborate; our guess is that most or all were taken from the old cemetery.

Some of the large stones now collected. Photo © 2014 Jay Osborn. 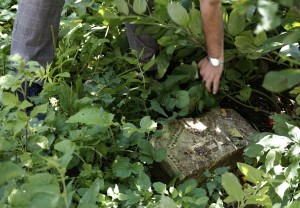 As is typical of most of our visits to Rohatyn, while walking the town and visiting the sites of some past stone recovery efforts, we discovered two additional headstone fragments which will need to be moved to a safer location.  This time the new pieces were found behind the garden on Ivan Franko Street, in the direction of the courtyard, parking lot, and shed where many other pieces have been found.  These new pieces were almost certainly placed there recently by a resident of Rohatyn who found them elsewhere in town, knowing that we would collect them.  Mr. Vorobets was with us when the new stones were discovered and will make arrangements to move the new stones. 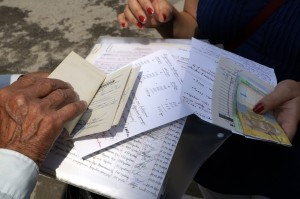 Of the 10,000 UAH given to Mr. Vorobets to pay townspeople for the recovery work since 2011, he still has in hand 4278 UAH (about $365 at current exchange rates).  He provided an update to his detailed expense summary, showing 33 separate payments since 2011 (6 to date in 2014).  As you know, Mr. Vorobets accepts no payment himself for arranging any of the labor. 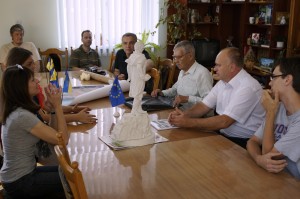 Meeting with the Vice Mayor

Joining us on this visit was Andrij Bojarov, the artist who is working on the conceptual design for a memorial incorporating the recovered headstone pieces in the Rohatyn old Jewish cemetery.  He also brought an architect who will assist with visualization of the concept, and a historian of urban centers who is experienced with arranging and implementing memorial projects on the Jewish community in Lviv and elsewhere.  Discussions between our group and the Rohatyn city mayor’s office were friendly and fruitful, and should help get the geodetic data and property information needed to develop the plan; the vice-mayor joined the group at the recently-recovered headstones and at the old Jewish cemetery for further discussion about our goals and some practical issues.

Our intent now is to assemble a written and illustrated project proposal for discussion with the city, and to aid fundraising beyond the core descendants’ group and friends.  Allowing for projects the participants have in progress now, we are aiming for a first draft of this proposal in November, with ongoing refinements thereafter based on data, discussions, cost estimates, etc.  Nobody participating in the memorial project to date has been paid or promised any compensation; we will address that when the project materializes. 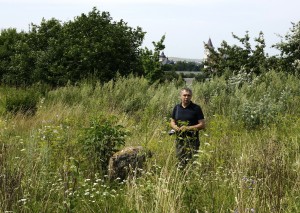 I will feed Andrij and the architect the data they need to assemble the first draft plan, and will manage the English-language portions of the plan for communication to this group and beyond; I will communicate directly with Alex Feller about the project but anyone is welcome to contact me at any time via email if you have any questions, suggestions, or comments.

[Note: This report was originally sent by Jay to the Rohatyn District Research Group.]