Jay and I were in Rohatyn yesterday, accompanied as usual by Alex Denysenko and his driver Vitaly. It was a typically intense day which included planned meetings with locals and unplanned issues brought to our attention by local retired school teacher and our long-standing ally Mr. Vorobets. The latter issues involved recovery of a new batch of about 50 headstones, uncovered during the demolition of a private residence, discussed more below. 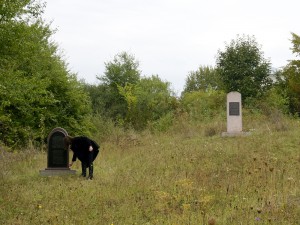 Leaving a stone at the new memorial. Photo © 2015 Jay Osborn.

Our first stop in town was at Rohatyn’s new Jewish cemetery where we saw for the first time the new memorial that was erected earlier this year to the 12 individuals whose remains were uncovered in a crawl space below the Ukrainian Church in Rohatyn: likely Jewish men, women, and children from the occupation period. Thanks again to Alex who acted as liaison on this project between our group, Rabbi Moshe Kolesnik of nearby Ivano-Frankivsk, and Father Bihun of the Ukrainian Church in Rohatyn. It took more than 2 years to see this project concluded, and we are very happy with the memorial, both in terms of size and material, and in dignity to the departed. 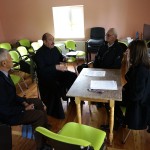 By 10 a.m. we were at Mr. Vorobets’ house going over the day’s itinerary. Our first stop was a meeting that was scheduled by Alex on my behalf with Father Bihun of Rohatyn’s Ukrainian Church. With the passing earlier this year of my father, Robert Raucher (his mother Chaje HORN having been born in Rohatyn in 1910), it has been my desire to have some sort of remembrance project in Rohatyn in his memory. We met therefore to discuss my making a personal donation from the modest inheritance I will be receiving from my dad’s estate. 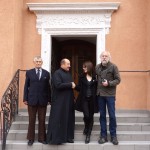 Through Caritas Ukraine, we will work with the Church (which over a year ago when we last met expressed its willingness to become involved in some limited maintenance and care of Rohatyn’s two Jewish cemeteries and mass grave sites). As we have yet to identify a successor to Mr. Vorobets, who is today 82 years old and wishing to be relieved of his long-standing duties in personally caring for these sites of Rohatyn Jewish Heritage for more than 20 years, I feel this new arrangement with the Church may be a good solution, at least for the short-term. 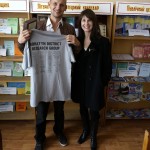 It was great to see Ihor again in Rohatyn. Photo © 2015 Jay Osborn.

Afterward we headed to see our old and dear friend Ihor Klishch at the Rohatyn public library, where we presented to him an RDRG tee shirt. He was very, very pleased. Thanks again to Alex Feller for making shirts available to us when we saw him in Jerusalem in July. Two more shirts were left with Mr. Vorobets to give to the former Rohatyn Deputy Vice Mayor and his son, both named Stepan Demchyshyn.

We then turned to the issues Mr. Vorobets wanted to discuss with us. 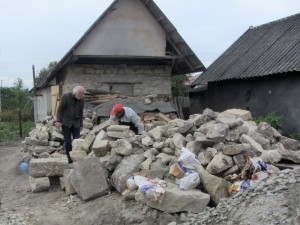 Searching for headstones among the rubble of the old building. Photo © 2015 Marla Raucher Osborn.

His first order of business was to take us to a site in a residential area at the south end of town – a neighborhood where we have not to-date recovered any headstones. It was recently brought to his attention that during the demolition of a private residence, a number of Jewish headstone fragments were found in the foundation. We met with the workers, shot a lot of photos at the construction site, and Alex and Mr. Vorobets negotiated a price for the 50 or so stones to be loaded onto a truck and taken later in the day to Rohatyn’s old Jewish cemetery – the site which is today receiving all headstones and fragments recovered so far from town. (All the “loose” stones previously at the new Jewish cemetery have now been moved here as well.) The attached photos show the construction site, the workers and crew, and also the stones unloaded at the cemetery in the afternoon.

The collection of recovered Jewish headstones at the old cemetery is now probably approaching 400 or so.

Newly-discovered headstone fragments at the building site (top), and then moved to the old Jewish cemetery (bottom). Photos © 2015 Jay Osborn. 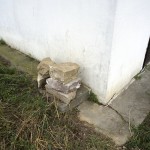 While at the old cemetery, Mr. Vorobets also brought to our attention 5 newly recovered headstones recently returned by a local man – delivered by him by bicycle. The new stones have been deposited on the side of the Ohel.

On Mr. Vorobets’ suggestion, we then met briefly with a local concrete contractor to discuss Rohatyn Jewish Heritage and our plan for a memorial space at Rohatyn’s old Jewish cemetery, which includes usage of the recovered Jewish headstones. The project concept is still in development, but we were pleased to be put in contact with the contractor who has had other Jewish heritage projects in the area through Meylakh Sheykhet of Lviv. 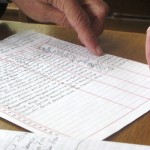 Our last stop for the day was a visit to the mass grave memorials at the south and north ends of town, both looking very tidy and well-kept, thanks to Mr. Vorobets.

Our day ended as usual at the cafe near the public library where Mr. Vorobets gave us an accounting of funds spent since our last visit (November 2014). He also put together new handwritten lists of Jewish students who attended Rohatyn’s Ukrainian school during the interwar period. We will make digital copies of these pages available to Alex Feller, and hope that someone who can read Ukrainian will offer to translate for the benefit of the group.

I close by wishing all – happy Shana tova from us, from the heart of Galicia,
Marla (and Jay)