A Helpful Meeting with Stowarzyszenie Magurycz 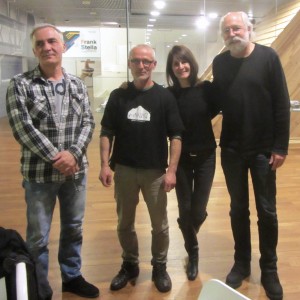 We met at the POLIN Museum of the History of Polish Jews. Photo © 2016 Marla Raucher Osborn.

Last night Marla and I met with two of the principals of Stowarzyszenie Magurycz (Magurycz Association), a Polish non-profit which organizes and conducts annual cemetery and headstone repair workshops in Poland and around Central Europe. The brothers Szymon Modrzejewski and Filip Modrzejewski have been been doing this work for 30 years (yes, they started when they were teenagers). We met with them to get their advice about Jewish headstone preservation and cemetery rehabilitation in Rohatyn. It was a very fruitful exchange; their questions were as enlightening for us as their comments, and they have agreed to provide advice on our technical project issues going forward. 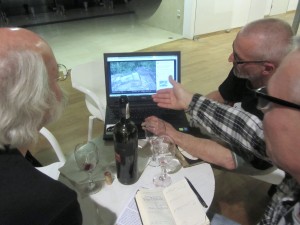 The Modrzejewskis describe some of the many projects they have completed over the years. Photo © 2016 Marla Raucher Osborn.

Over the years, Magurycz has concentrated their efforts in rescuing cemeteries where the original communities which established them are gone, typically due to wartime killing or post-war forced migration. Since 1986 they have held more than 60 workshops to recover, inventory, and document cemetery markers of all types and materials in areas originally inhabited mainly by displaced Boykos, Lemkos, Jews, Poles, Romani, and Germans. Their work is apolitical and without religious origin; it derives from sensitivity and a desire to serve. The positive response they have seen in local communities near their worksites is very much what we have experienced in our own small work to date in Rohatyn.

The Facebook page of Stowarzyszenie Magurycz is well illustrated with many images of their workshops in recent years, including at the Jewish cemetery of Rybotycze village in southeastern Poland, near the border with Ukraine.

Headstone recovery and repair at the Jewish cemetery of Rybotycze village, showing before, during, and after rescue. Photos © 2013 Stowarzyszenie Magurycz. 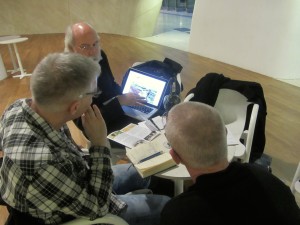 The Rohatyn Jewish Heritage projects have many technical and practical issues and questions. Although it has been a long-time priority for European Jewish heritage associations and conferences to find or assemble ‘best practices’ guidelines and instruction for headstone and cemetery rehabilitation, so far very little information is available to us. The experience and expertise developed by the Magurycz Association and its volunteers should be very useful for us in our own projects. We believe much of this expertise is best learned through hands-on work, so we are interested in joining one or more Magurycz workshops this year and beyond.

Szymon likes to quote from Heinrich Böll’s Irish Journal, in which the author is struck by an aphorism he reads in the pages of The Irish Digest: “Cemeteries are full of people the world could not do without…” We couldn’t agree more.

The short video below captures both the work and the spirit of their efforts. We are very pleased to make their acquaintance, and look forward to supporting their work as a means to learn for ours.