Repairs have been completed on the concrete base of the southern Soviet-era mass grave memorial marker. Photo © 2016 Jay Osborn.

We have new information and have begun new activity on the Mass Grave Memorials Rehabilitation Project. As we have outlined on the project page, the memorials in Rohatyn are in good condition; to date we have only needed to do some small concrete repairs to the the Soviet-era monument at the southern grave area. 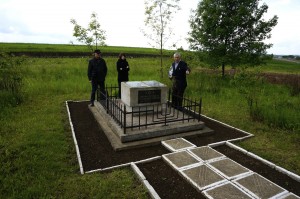 However, the actual boundaries of the two known grave areas have never been precisely defined, and there is considerable uncertainty and disagreement in descriptions from Rohatyn Shoah survivors, local living witnesses, and secondary reports from the Yizkor book and other available sources. It is well known that the north and south memorial monuments were placed near but not at the actual grave sites; other factors including accessibility and visibility influenced the choice of monument locations.

To aid visitors to the sites as well as the local landowners and businesses, we have decided to try to measure and define the actual grave boundaries at both locations. As we have described before, local farmers and workers respect the grave areas and refrain from using the land for any purpose, but the uncertainty about the precise grave areas leaves open questions. Our long-term goal is to create some kind of modest boundary marker at each location, so that local workers can be confident in working around the sites. In the short term, we hope to define through unambiguous geographic data precisely where those boundaries lie, and to place temporary markers until a permanent perimeter can be created.

At the northern mass grave area, residue from a former brickworks, including a brick embossed with the town name. Photos © 2016 Jay Osborn. 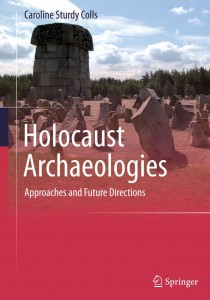 At last year’s Rothschild-sponsored conference in Vilnius on Jewish cemeteries in Europe, I was fortunate to share a panel on technologies for cemetery research with Dr. Caroline Sturdy Colls, a British professor of archaeology who has scientifically investigated several Holocaust sites in Europe, including Treblinka. The methods used by Dr. Sturdy Colls and others include non-invasive research: surface measurements can be used to study the soil below the surface, to respect Jewish traditions and avoid turning the soil over graves. Similar methods were used by a Polish-Israeli team at Sobibór. The scope of our project is much smaller than either of those, but the issues and current uncertainty are similar. Marla and I spoke with Dr. Sturdy Colls about Rohatyn while we were at the conference last year, and we are now preparing a request for proposal to send to her for initial planning and quotation; I am also reading her 2015 text Holocaust Archaeologies to aid our preparation. If we are able to go forward with this work, we will raise funds for it separate from the ongoing Jewish headstone recovery project. And as always, we will ensure that any work in the mass grave areas, as in the pre-war cemeteries, will be under the guidance of Rabbi Kolesnik of Ivano-Frankivsk. 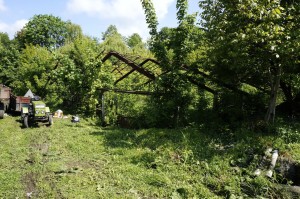 The greenhouse frame believed to be installed over the grave of Jews from around the Rohatyn district who perished in 1943. Photo © 2016 Jay Osborn.

While in Rohatyn this morning, we discussed our hopes and developing plans with the mayor and the city administration. As Marla described in her report, the city welcomed this news, as they are already working on concepts to develop the northern mass grave site as a memorial area, and wanted to include the actual grave boundaries; we are fortunate that the building materials site is owned by the city. 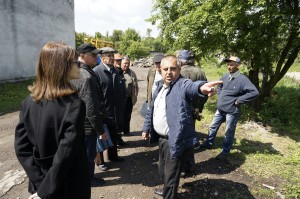 City workers describing the history of the site, and past experience with the mass grave area. Photo © 2016 Jay Osborn.

While visiting the northern site before our meeting at city hall, we spoke with workers in the industrial yard there. They confirmed preliminary analysis by Yisrael Schnytzer (a descendant of Jewish survivors of WWII in Rohatyn) on the 1944 Luftwaffe aerial photograph acquired from US archives by Alex Feller, which suggested that the actual grave site is several tens of meters to the northwest of the memorial monuments. The workers told us that a greenhouse frame had been installed at that location a couple of decades ago, and when the frame was anchored in the ground, digging for that uncovered human bones. The greenhouse plan was abandoned, but the frame is still in place. The city plans to remove the greenhouse frame before further development of the site as a memorial.

We agreed with the city to share our plans and schedule for the non-invasive research work at both north and south sites, and both we and the city expressed a wish to cooperate on this and future projects. We will report here also, as those plans develop.

A panorama of the northern mass grave site, from the perspective of the memorial markers; the greenhouse frame is at center. Photo © 2016 Jay Osborn.