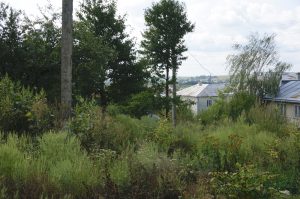 The old cemetery in need of clearing.
Photo © 2017 Jay Osborn.

We are pleased to announce that the old Jewish cemetery in Rohatyn has been designated a joint clearing project for 2018 by Rohatyn Jewish Heritage (RJH) and our friends at The Matzevah Foundation (TMF). Last month the board of TMF met to review their projects in Poland in 2017 and to begin planning for 2018, and the board voted to include Rohatyn as one of its cemetery projects for the coming year – its first volunteer project in Ukraine. Having worked with TMF at some of their project sites in Poland since first meeting them three years ago, and admiring their dedication and their project management skills, we are excited and honored to partner with them for the Rohatyn project.

TMF at work in Nasielsk earlier this year, together with a Jewish descendant. Photos © 2017 Jay Osborn and Marla Raucher Osborn.

The Matzevah Foundation is a registered US non-profit charity organization, established by Christians to care for and restore Jewish cemeteries in Poland while creating opportunities for dialog between their volunteers, locals, and others about the Holocaust. We first met them by chance on a visit to the Oświęcim (Auschwitz) city Jewish cemetery during their project work there in 2014. Since then we have worked with them in the Jewish cemetery of Nasielsk (twice) and in the cemetery of Oświęcim, and we joined them for a cemetery re-dedication following their work in Markuszów. Each year, TMF conducts several Jewish cemetery clearing and restoration projects in Poland from late spring through summer, bringing together volunteers from the Americas, Europe, and Israel plus local civic leaders, educators, students, and interested citizens.

Some of the challenges in Rohatyn’s old cemetery. Photos © 2017
Steven D. Reece and Jay Osborn.

With a decade of experience working in distressed Jewish cemeteries, with repeat projects in some locations over several years, TMF knows many of the issues which complicate clearing and cleaning operations; the Rohatyn cemeteries share several of those issues. TMF members we have worked with consistently impress us with the heart and mind they bring to their work, and the humor they share despite the often heavy labor. In August of this year, we welcomed two of TMF’s long-time activists to Rohatyn for a tour of its Jewish and other heritage, and made a careful review with them of the old Jewish cemetery for a preliminary assessment ahead of the TMF board’s project consideration.

Steven and Bruce of TMF evaluating the vegetation and other features of the cemetery this past August.
Photos © 2017 Jay Osborn and Marla Raucher Osborn. 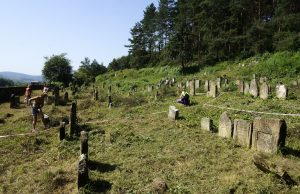 The Rohatyn Jewish cemetery clearing work has been calendared for late summer 2018, probably the last week of August. Much advance planning and organization work will be needed for this effort, in part because the work will be done away from TMF’s usual base of operations in Poland. The current project concept includes sharing costs between TMF and RJH to purchase locally-sourced tools and supplies; after the cemetery is cleared, we hope to donate the equipment to a local volunteer organization to support Jewish cemetery maintenance in the region. There is a strong volunteer consciousness developing in the region which has already been active in Jewish cemetery restoration in the Lviv and Ivano-Frankivsk oblasts; those ongoing efforts could be amplified by the addition of quality power and hand tools.

Other advance planning tasks will include working with the City of Rohatyn to coordinate permits and identify waste management resources, reserving accommodations in and near Rohatyn to house volunteers, arranging transportation and interpreters for volunteers from outside Ukraine, and applying TMF’s experience to manage common issues in the clearing process. The cemetery clearing next summer is an important step toward the planned rehabilitation of this historic cemetery, which dates from the middle of the 17th century. We are looking forward to making visible progress next year on that larger project, together with our friends.