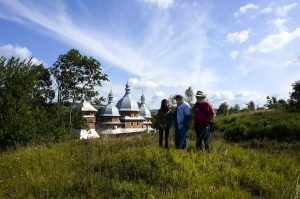 Marla with Steven and Bruce at the top of Rohatyn’s old Jewish cemetery.
Photo © 2017 Jay Osborn.

It was our great pleasure yesterday to bring to Rohatyn our friends Steven Reece and Bruce Mussey of The Matzevah Foundation, Inc. (TMF), a qualified Christian charity organization based in Atlanta, Georgia, with more than a decade of experience working in Jewish cemeteries in Poland. The visit gave Steven and Bruce a first opportunity to walk Rohatyn’s old Jewish cemetery with an eye toward conducting a major clearing project there in 2018. If the project is approved by the TMF Board, Rohatyn will become their first project in Ukraine.

For 2018, at Rohatyn Jewish Heritage we hope to focus our time, energy, and resources on planning for the rehabilitation of Rohatyn’s old Jewish cemetery. This important project aims to transform the approximately one hectare cemetery into a space of memory for Jewish visitors and local non-Jewish residents, while preserving and highlighting its original purpose as a resting place for many generations of Rohatyn’s Jews. The project concept incorporates a modest display of hundreds of recovered Jewish headstone fragments, landscaping for seasonal interest and simplified maintenance, and signage to inform visitors about the history of the cemetery and other Jewish heritage sites in town. A careful clearing and cleaning of the cemetery grounds is a necessary first step toward realizing this rehabilitation project.

Steven and Bruce evaluating the vegetation and other features of the cemetery.
Photos © 2017 Jay and Marla Raucher Osborn.

TMF organizes volunteer projects to clear Jewish cemeteries in Poland as part of their efforts toward remembrance, restoration, and reconciliation between Jews and Christians. Other TMF projects over the past years have included headstone recovery and documentation, mass graves survey support, installation of cemetery fences and walkways, and a broad range of education projects for volunteers, university and high school students, local residents, and others. The organization operates in cooperation with the Rabbinical Commission for Jewish Cemeteries in Poland, the Jewish Council of Warsaw, Poland’s Chief Rabbi Michael Schudrich, and the Foundation for the Preservation of Jewish Heritage in Poland (Marla’s former employer). TMF organizes several volunteer projects each year to care for and restore Jewish cemeteries in places where there is no longer a Jewish community or where the community is too small or aged to care for the sites. Earlier this year, Steven, as CEO and founder of TMF, was honored with the prestigious “Preserving Memory” award at a ceremony at the Galicia Jewish Museum in Kraków.

Touring some of Rohatyn’s other heritage sites. Photos © 2017 Jay Osborn. 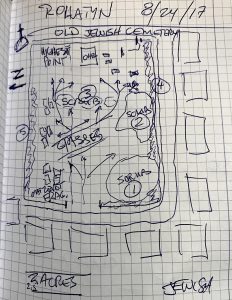 Jay and I have had the great pleasure over the last few years of working with Steven, Bruce, other TMF Board members, and volunteers at TMF clean-up projects in Jewish cemeteries in Poland, including most recently in Nasielsk – our second time working at this cemetery with TMF alongside local Polish activists and Jewish descendants of the town. Jay also joined TMF in Oświęcim, Poland in 2016 where they were partnering with the Staffordshire (UK) University archaeology team of Dr. Caroline Sturdy-Colls, the same team which surveyed the Jewish mass grave sites in Rohatyn in May of this year.

Steven and Bruce will present their preliminary evaluation of Rohatyn’s old Jewish cemetery (its size and condition, with estimates of project time and volunteers) to the TMF Board when they meet in autumn to review and schedule their projects for 2018. We are anxiously awaiting the results of their meeting, with crossed fingers that Rohatyn becomes their first project in Ukraine.